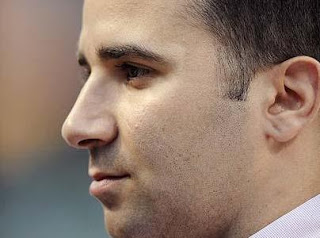 I suppose I would quibble with the semantics of it all.

"....Anthopoulos characterizes the Blue Jays as a team that's building, rather than rebuilding.

"I think when people talk about a rebuild, it would be tearing down a team and trading away numbers of players. I don't know that we have that necessarily," he said. "I think we have a lot of good young players, I just don't think we have enough. I think we need to continue to add to those players."

If you can't extend your franchise cornerstone (Halladay), and are looking to trade away key veteran offensive pieces (Overbay), while building around the young controllable players currently on your roster (Lind, Snider, Hill)....well my friends, that right there is a rebuild.

And what did we expect, really?

A magic bullet enabling the club to extend Doc for 3/$75 and gain a commitment from Rogers to pursue top flight free agents? That was never, ever going to happen, even if we had coaxed ourselves into maybe believing something of the sort could happen. And by "coaxed ourselves", I of course mean "bought into the Beest's hype". That's our bad.

And so it begins. I've often used the "I don't know what I'm gonna do if the Jays trade Doc" tag, but I suppose I'm about to find out. And really, that's the franchise's only play. My guess is the team approached Halladay and tip-toed around the idea of an extension, and were flatly denied. Pure speculation on my part (what am I, a journalist?), but it would seem to make sense in the context of this quote:

As for Halladay specifically, while Anthopoulos said the 2003 American League Cy Young award winner is one of a handful of players he would be reluctant to trade, he said the 32-year-old has made it clear he is not interested in tying himself to Toronto after his contract ends following the 2010 season.

"He's probably one of the greatest if not the greatest Blue Jay to ever put on the uniform," the GM said. "But he wants to win and really, at this time, we were a 75-win team last year.

"I think he's stated that his timeline for winning and ours may not mesh and may not match and for us right now," he added. "Roy's position is to wait and see what kind of a club we have in 2010, see what we can do from a win/loss standpoint. We respect that and we understand that."

So that's that. That's where we stand. We wanted to know, and now - mercifully - we do. The team is going to sell off any and all expendable parts that don't fit into the plan of building a winner down the line, and the Jays are going to go young.

It's a step up from where we were last season, when we slugged through 162 games of, uh, whatever the hell that was.

There's a lot to be excited about when you listen to AA's vision for the team. He speaks of building a model organization. He talks of Toronto becoming a preferred destination for scouts and front office types. He talks of becoming an organization that can be up there with the "Anaheims, the Chicagos, and the Bostons" (read between the lines - fuck the Yankees). He wants to build a franchise that develops championship talent and supplements it with key free agent pieces.

That's all good stuff. That's vision. It's a remarkable turnaround from where the organization currently stands.

The proof will be in the proverbial pudding, of course, but if that's what it takes - rather than chasing and throwing ridiculous contracts at the Jason Bays and John Lackeys of this year's FA class - then I can get on board. So bring it on.

Email ThisBlogThis!Share to TwitterShare to FacebookShare to Pinterest
Labels: Alex Anthopoulos, fuck 2009, I don't know what I'll do if the Jays trade Doc, The Plan

It's become when, not if. And that's fucked up.

Snyder for Overbay ... who plays first?

Bleaf, there are some decent 1B options out there. Nick Johnson is a free agent, and while he's made of glass, he's a much better hitter than Overbay. I mean, Overbay's VORP was 20th in the majors last year, so I don't think there will be as big a drop-off as people think.

This kind of reminds me of when the Red Sox caught shit for trading away Shea Hillenbrand, because he was hitting .300. Within two years, he was out of the majors, I believe. Overbay is a fringe asset the Jays don't need - Take your chances with Johnson or Adam LaRoche as guys with some upside maybe, or try to stopgap it for a year with Nomar or Jeff Bailey or Eric Hinske or whoever.

I think we can get by with a 1B platoon of Ruiz/Lind with the other at DH. Maybe Millar can stay on to teach! *ducks*

As to build/rebuild - I like the term build too. Only because to rebuild would indicate that at some point in the last few years we've actually had something built. That is not the case. My kid builds more solid structures with his Legos than the Jays have had in the last 10 years.

My optimism for finally seeing a viable vision for the team will constantly be blurred next season whenever Cito makes the lineup card.

If Alex Anth signs Millar, in any capacity, I'm done with this team.

Call me crazy but I heard the exact same things when Riccardi was signed. Building from within, improved scouting, not signing expensive FA etc.

I'm not buying into the bullshit until I see some results.

I agree that the same ol' song and dance was given when Ricciardi was taking over the club. The big difference (I hope) here is that they stick with it. Ricciardi's direction did result in the current young core (Lind/Hill/Snider/Marcum/Litch etc), the major problem was that he was given too big of a budget one year and he used it to try and 'Yankee' a pennant. My hope is that Alex Ant does what he says, and stays the course, rather than careening off in a fiery crash that is felt 5 years later.

Ack, here's the simple solution about what to do when the Jays trade Doc - get a 60 of bourbon and just keep drinking till it stops hurting.

Agreed. Now, I totally agree with what AA is trying to do. Those expecting immediate results, or who are skeptical until they see results are unrealistic, given how this team finished the season. I was one who thought at the start of next year they were "one year away" from contending... but after the showing in the latter 75% of the season, it was clear what direction the team needed to take.

Call me crazy but I heard the exact same things when Riccardi was signed. Building from within, improved scouting, not signing expensive FA etc.

Yeah, but Ricciardi came in and fired most of the scouting staff, whereas AA said yesterday he expects to have the largest scouting department in baseball. That's a pretty big difference in philosophy, and on top of that, Anthopolous has been working in the AL East for something like 4 years already -- I'd like to think that means he's got a better idea of what really works here (and, certainly what doesn't) than Ricciardi did when he first came over here.

Check out a new, comprehensive blog on the Blue Jays at http://jaysbalk.wordpress.com

I wonder what was the best offer Ricciardi rejected for Halladay during 2009. Since it appears certain he is gone, it would be interesting to compare that to what AA gets in 2010. The Phillies and Dodgers should still be keenly interested though. Doc could have been the difference for either of them.