We've got us a touch of the WBC Fever 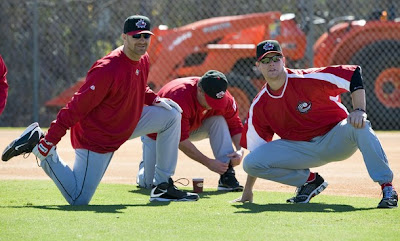 How funny is it to see a Tim Horton's cup - presumably a double-double - nestled at the feet of the anonymous Canadian in between Corey Koskie and Justin Morneau in the picture above. We don't even especially like Timmy's, but if blind patriotism is the order of the day, then we fully support our boys getting some Timbits shipped to their camp in Dunedin.

We're probably a sucker or a chump for having bought into this whole World Baseball Classic tomfoolery. But now that we've finally caved and bought our tickets, we're getting seriously geeked to see the Canada-U.S. game on Saturday afternoon.

On the other hand, we might just be happy to take a breather from talking ourselves into the idea that the 2009 season won't be a complete loss for the Jays.

We managed to catch a few innings of this afternoon's game, and it has us all the more stoked. Sure, we're a little concerned when we see pitches sailing to the backstop and catchers making ill-advised throws into the ground after fielding said wild pitches. Nevertheless, we like the look of the lineup that Canada is going to be able to roll out for a few games.

It's just too bad that all the good Canadian pitchers are such a bunch of bitches. (Yeah, ya heard right Dempster...bitches.)

Speaking of pitchers, how's this for a warm up to the WBC: the heavily left-handed Canadians will face World Series MVP southpaw Cole Hammels when they play the Phillies tomorrow. Nice.
Posted by Tao of Stieb at 3:50 PM

I'll be at the game, too, and I can't fucking wait.

Hoping that Dunn is in left so that we can give him shit.

(Even if he doesn't really deserve it.)

Either that Timmies cup was photoshopped in there, or Koskie had that double-double shipped down to Dunedin, because I don't think there are any Timmy Ho's down there.

So when Tao gets his morning coffee (assuming it's not from a French press -- and no, I am not talking about Mrs. Tao) where does he get it?

I hope Bridgehead for the Capital City goofballs in the crowd.

Doesn't Tim Hortons sell a mug that looks like their paper cups? Maybe it's one of those, and the handle is at the back.

We've got a Timothy's, two Second Cups and two Starbucks that we walk past on the way to work, so it all depends on our mood.

But Lloyd is right about Bridgehead...they've got best coffee in Canada.

Now somebody tell me who's on these teams.

Bring Fergie out of retirement! He IS a machine: http://www.baseball-reference.com/j/jenkife01.shtml