The Beej is not a hampy camper 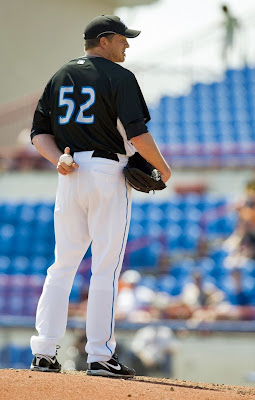 So B.J. Ryan is not totally thrilled with all the talk about the possibility of being supplanted in the closer role. "It's an uncomfortable question with a lot of uncomfortable answers" Ryan told the Globe's Rob MacLeod.

After another subpar outing yesterday, Ryan sports a 9.00 ERA in seven Grapefruit innings, walking seven and striking out six. His velocity, if it matters, topped out at 87 MPH yesterday.

Without papering over the concerns over Ryan's performance in the Spring, we don't mind the Jays' high-intensity closer being a bit pissed when talk arises about someone taking his job. That's the gunslinger mindset that many of the great closers have, and without getting too hokey about this, that sort of swagger counts for something.

Perhaps more troubling is the fact that Ryan isn't alone in his struggles. If there was an obvious candidate to step in and assume the closer role, we might understand the public speculation about Ryan's capacity to lock down the ninth. But a glance through at the other closer candidates shows some pretty spotty performances in the fake games:

Really, the only "standout" so far in the exhibition season has been Jesse Carlson, who hasn't allow a run yet, but three innings of work is a pretty microscopic sample size. We could make an argument for the recently dispatched Dirk Hayhurst, although we're not sure that he has the mythical "closer stuff" that we seem to be buying into lock, stock and barrel.

Look who snuck into the Super Duper Roundtable
Mop Up Duty has posted part two of its blogger roundtable, and we've managed to sneak in our views on the Jays' prospects for the coming year.
Posted by Tao of Stieb at 9:46 AM

Tao, do you give Ryan the benefit of the doubt in real games or replace him with someone else before the season starts?

^^ you know, I was actually pondering this myself, and came to the conclusion that if I'm Cito, I let him start out closing and if he sucks all kinds of ass, then you make a move until (if?) he "works it out".

The bullpen will be a huge problem this season.

We'd give Ryan two weeks once the real games start, with a quick hook at the ready.

He's hitting 87 this week on the gun, and we'll bet he's at 89 by the time they face the Tigers next week.

And as the Ack notes, if League were ripping it up, it would make this a little easier.

The bullpen is gonna be a hugh problem? Really? One of the best if not THE best in all of baseball last year.

Now I fully expect them to regress back to the norm, but that is a far cry from huge problem.

Bullpen: 6 of 7 guys are aces at their jobs - Ryan is the odd man out. He blows 4 to 6 in April and come July you'll be able to hear a pin drop at Rogers Roofed Dome. Accardo and Janssen are just a mended bone or two away in Lost Wages.

On 2010: REAL complicated. I wouldn't be at all surprised if Purcey, Litsch, Mills, Romero and Cecil were ALL playing VERY WELL and very much in the mix. McGowan and Marcum might just end up being trade bait - OR - Halladay might just be expendable for a KILLER SS with a bigger bat than Godzilla.

I just want to throw my .002 cents in as saying maybe closers can't close unless it counts. This has been stated above 4 different ways, but I am saying it again.

I just want this part of the team to still work as intended.