Is the Prime Minister of Defense ready to take his walk in the snow? 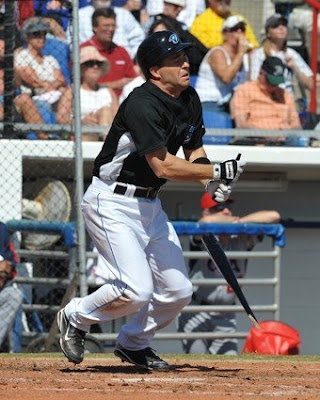 There was some interesting back and forth during yesterday's simultaneous live tweet-fests on the possibility that John McDonald could get squeezed out of the picture before the team goes north.

Both Jeff Blair and Jordan Bastian noted that the team is beginning to look at Joe Inglett as a possibility at short, and that the team doesn't think it can carry a bat as weak as Johnny Mac's much longer. When asked if Inglett has the arm to play short (a position he's played only 45 times as a professional and never in the Majors), Blair noted that he believes he does, but also "Most importantly, he has the bat".

Also in the mix, according to Bastian, will be José Bautista.

It's a bit sad to consider this as a possibility, given how much we (as most other Jays bloggers) love seeing McDonald's otherworldly defensive prowess. At the same time, it seems as though he has actually regressed at the plate, and the notion that soon-to-be 34 year-old McDonald is suddenly going to sort it all out and become an adequate hitter is at best wishful thinking. This isn't to say that it is the end of the line for Johnny Mac, but our guess is that it will take an injury or a trade out of town for him to see big league playing time this year.

It's funny, but considering how much we hate all this shite about gritty gamers, and heart and soul guys, and players who get themselves dirty, we've had much more of a soft spot for McDonald then we could have imagined. Then again, we don't think it's an exaggeration to say that he is the single greatest defensive player we've ever seen on the Blue Jays (and yes, that list includes Alomar, O-Dog, and Tony Fernandez.)

George Bell: Still awesome, still wearing his hat like that
Big League Stew caught up with George Bell around the Dominican Republic's WBC camp, where he had stepped out for a butt (and not a purple butt, we should point out). The impromptu interview is short but sweet, and worth the read for anyone who ever emulated his rocking batting stance.
Posted by Tao of Stieb at 10:55 AM

I think when you mentioned his age you hit the nail on the head. Carrying a brilliant defensive replacement is a lot easier on a settled veteran team than it is on a team which is going to rely heavily on "gee whiz, I hope x out of y of these prospects turn out to be great so we can compete in the next couple years". They need those roster spots.

But I'll miss him if he's gone.

Tao, holla at ya boy on Saturday afternoon. I'll buy you a beer.

Hey, I didn't say it was going to work. I said it was the plan.

"greatest defensive player we've ever seen on the Blue Jays".

Hmmmm. Hmmmmm. He's definitely up there. You forgot Devon White and Vernon from that list.

I'd agree he's the best defensive infielder we've had, for sure.

All the more reason we should keep him. We were the best fielding team in the majors last year, we have to keep that competitive advantage going. Let's at least keep him to be Doc's personal SS.

Tony Fernandez was the first ballplayer I can ever remember calling my "favourite" player. ....deep in the hole at short, spin move/rainbow to first to beat the runner by a half-step. Classic.

Reading that interview over at Big League Stew made me realize something: I don't have enough Geroge Bell in my life.

Hoar-Hey is still rockin it...my parents still have the JAYS11 plate that my brother's and I convinced them to get like 20 years ago.

I have to give Octavio Antonio the nod over J-Mac.

*. I can't figure where to put Devo on this list just because it's apples and oranges.

I could see giving McDonald points over Alomar for playing SS, but Robbie made everything easy. Fielding, spitting, beating AIDS faster than Magic Johnson. All these feats deserve recognition.

It isn't so much about "grit," which apparently means sprinting to first base on a walk, as it is about the (underrated) value of having amazing defensive skills.

If the rest of the jays could hit, they could carry Mac's awesome defense. But since they haven't, we need to squeeze offense out of every AB. Thank the lord we don't play in the NL.

Actually I take it back. J-Mac hasn't played a full season of SS so we can't say how he'd hold up over a full season, let alone a stretch of full seasons.

After actually doing some research instead of talking out of my ass, and considering the defensive spectrum, I learned that...

Rios - just check those UZR numbers! He should have 2-3 GGs by now. Seriously. UZR says he's been the best OF in the majors from 06-08.

Rolen would easily be #1 on the Jays list but he's only been with us for a year. Check his career UZR stats though. Insane. He actually had an OFF year last season. Beltre or Longoria deserved it last year.

A-Rod is better as a SS than 3B

Torii Hunter is not only overrated, but apparently he sucks too. He barely deserved his 2003 GG. Either Rios, Crawford, or Sizemore should've got the other 7 he's won.

I am conflicted. We clearly need bats. But, as SP said, it would suck to lose our competitive defensive advantage.

Speaking of wishful thinking, the notion that Inglett's bat could become our #1 shortstop and play at least average defense is tantalizing, but I refuse to be suckered in so easily.

Bleh. I've come to the conclusion that Blair gives little to no value for defense.

I really don't think Inglett has the arm (I don't remember any rockets coming in from the outfield last year) and even if he does, SS is more about being quick with the ball from glove to hand to release. Ugh. It's a difficult fucking position, you don't just run someone out there because they have a slightly better bat. Especially with a pitching staff that relies on such stellar defense.

This is worse than Scutaro.

If Millar starts hitting well and Hill slumps are we going to try him at 2nd?

Not sure why it's hard for JMac to get playing time. He should be playing every ninth inning the team has unless the team is down by a small number of runs. And every eigth inning if they're ahead by anything.

And most Halladay starts.

I think Inglett's turned into a really smart and effective hitter, but I don't remember him being anything better than decent even playing at 2nd base

I know Pierre Trudeau took a famous "walk in the snow". Did another former PM do so as well?

This being Canada, I'm sure that most of our Prime Ministers have taken a walk in the snow at one point or another.

(But yes, just so that we're completely explicit about the title, it does refer to Trudeau's walk.)

Inglett was below average defensively at second (average overall among the many positions be played) and above average offensively, and was worth $7M. Not as much as Hill's $14M value in 2007, but Inglett got paid major league minimum.