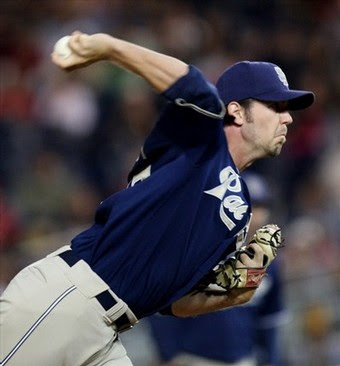 The standard caveats about the relative value of statistics in springtime fake games apply, but go with us here for a second as we get lost in the dreamy spring training numbers being put up by Dirk Hayhurst.

When the Jays plucked the aging minor leaguer off the scrap heap, the move elicited more than a few snorts and giggles along with the requisite hand-wringing. The Yankees were getting ready to load up on every arm in sight, and the Jays were scoping out guys with ERAs over 9? Fourth place! Fire J.P.! Contract the team! All is lost!

But a funny thing has happened in Florida over the past few weeks: Dirk Hayhurst has pitched his ass off. In seven innings so far, he has struck out 12 batters and has yet to give up a run or a walk. Hayhurst has been so dominant that one imagines that the only offensive force strong enough to face him may be Jason Lane.

Even with this otherworldly performance, Hayhurst will still be in tough to make the big league team come April. It seems unlikely that he could slide into the back end of the rotation after a couple of years coming primarily out of the bullpen, and the Jays have more than enough relief arms who are assured of a trip north.

(Which brings up a whole other question about whether the Jays could consider a start-by-committee scenario for the fifth starter slot, but that's another post altogether.)

Incidentally, if you want to get a better sense of the Jays new bullpen ubermensch, Hayhurst penned the "Non-Prospect Diary" column on Baseball America's over the past few years. These occasional entries offer some interesting insights into the life of a player hanging on to the last vestiges of his baseball dream, and make you root for Hayhurst that much more.
Posted by Tao of Stieb at 9:03 AM

I've been a fan of Hayhurst's as both a writer and a ballplayer since he was picked up and I looked into his playing and writing.

I'd love to see the Jays get something for Frasor and recognize that Camp isn't anything special and bump Dirk up the line a couple of notches.

With the Jays being able to turn any ham and egger into a viable relief pitcher they should be dealing arms left and right for some infield/DH help.