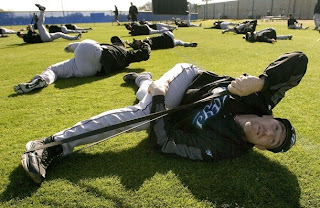 As spring progresses, I plan on bringing my "A" game....which is, you know, still several notches below "adequate". Honest. Fucking honest! But for now, with the players settling in and the roster storylines still developing.....I got nothin' but quick thoughts.

.....I'm all over Travis Snider this spring. All over the dude. You'll recall me recently bringin' the hyperbole over the phenom's attitude heading into camp, but actions do indeed speak louder than words. Well, The Future strolled into camp in (apparently) great shape, and has tweaked his batting stance - something suggested last season but ignored. Opposite field fury, now coachable too!

.....This can't be overstated: Shaun Marcum's refusal to don the new BP cap for spring workouts is the stuff of legend. Never mind the bullshit and debate - that's your opening day starter.

.....So what's all this about the Jays interest in Cuban defector Jose Julio Ruiz anyway? A left handed hitting first baseman with gap power? Sound familiar? I suppose if he can be shifted to left field, a signing might makes sense. Consider me "intrigued".

.....Rumored interest in fellow Cuban SS Adeiny Hechevarria might make more sense. Of course, I know nothing of the talent either of these fellas possess, so there you go. But hey, I'm willing to buy into any and all hype around a potential "shortstop of the future".

.....via Drunk Jays Fans, I like the cut of Alan Ashby's jib. Seems the team's radio colour guy, like many of us, cannot for the life of him understand (or get behind) another year of The Manager. Last season, I happened to be listening to the radio broadcast (which is a miracle in & of itself, since radio coverage "out here" sucks) the day news broke of the clubhouse dissent. Still in a state of shock (where the fuck did that come from?), I was even more surprised to hear Alan & Jerry talking about the situation....of which they seemed anything but surprised. We'll know Ashby's true feelings if we hear him referring to "Clarence Gaston" at any point this season. Boo-ya.

.....At least Brian Dopirak's name is getting a token mention of being involved in a spring battle. Of course, it's a competition for a spot with fellow underdog and blogger fave Randy Ruiz for about 150 AB's. It's true what they say about backup quarterbacks, but when you've experienced Kevin Millar as your starter, it's an understandable position to take.

.....Baseball Prospectus goodness: "Youkilis isn't much fun to watch for non-Red Sox fans. he's an ugly, sweaty, man-beast with a pale, bald pate and a fondness for overgrown facial hair, he's got one of the game's most irritating batting stances, and he's a grade-A red-ass who takes particular exception to being pitched inside while standing on top of home plate (most recently trying to Oddjob Rick Porcello with his batting helmet following an HBP)."

Truth! I'll skip the next few sentences of the profile which go on to describe him as essentially one of the most valuable players in the game (also true). Why would I transcribe that?
Posted by The Ack at 12:46 AM

Awesome Youk description. If only Pedro was still Pedro and could put one in his throat.

it's been a string of a-holes for the Sox. I don;t know if the city turns them into raging d-bags or if the team has a metric for that when scouting (his vinegar rating was +1.5 last year!)

Mike, I think it is more that every minuscule detail of the Red Sox is covered as a major story. Nobody cared that Carl Everett was an effing nut in Houston because he was in Houston.

As ridiculous as it may sound, I miss reading this blog on a daily basis. Top notch stuff, as always, Ack. I hope everyone around these parts is doing well.

And, a favour: could someone please expand on the Marcum/BP hat story? Thanks.

eyeb, glad to hear you are well. Thanks for the words.

No real story, I don't think....we've just been noticing that in all the spring photos (daylife!), Marcum stands out for wearing his gamer instead of the racing stripes BP model.