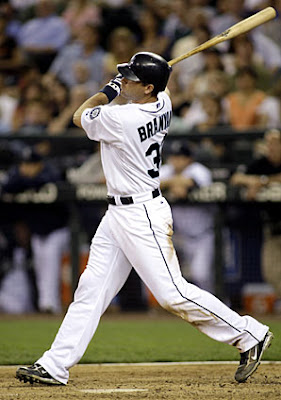 About 10 years ago, in an age before blogs (really!) and such, people used to fart about on newsgroups, which were essentially long email trails populated in general by anonymous strangers with similar interests. (My, haven't things changed...Progress!!!1) Newsgroups were generally a tremendous waste of time, due in large part to the fact that you had to sift through post after post of idiotic blowhards who regarded a given newsgroup as their personal fiefdoms. They would look upon these online fora as the perfect venue into which they would unleash their wisdom upon the apparently unwashed, stupid masses.

(And don't get us wrong: We get that we do pretty much the same thing. But we'd like to think that we are vaguely entertaining and occasionally insightful...plus, we have pictures!)

We mention all of this because the talk last night about the Jays possibly showing some interest in Russell Branyan reminded us of one particularly obnoxious goof who used to regularly excrete his unbridled manlove for the big whiffing slugger when he was still a prospect in the Indians system. The poster, who went by the name Greyjay, would endlessly prattle on about how incredibly prescient and insightful he was, and how the multitude of absurd trades that he would suggest were the only path to glory for the Jays. (At some point, he was pretty much tossing Halladay into whatever package as a throw-in, while advocating the acquisition of Tony Armas Jr.)

Mostly, though, this dude would go on at length about how the Jays were stupid not to make a trade to get Branyan, as he was virtually guaranteed to hit 40 homers and drive in 125 runs every year. (And for those of you playing along at home, Branyan set career highs in those categories last season...with 31 homers and 76 RsBI.)

We're not sure what ever became of that dude, although we've occasionally convinced ourselves that he was either Bob Elliot or Richard Griffin. Considering the condescending tones of his writing, and the love of Canadian players and Expos, we could make an argument for either one. Whoever it was, we wonder today if he's be thrilled to see Branyan on the Jays radar, even if it is a decade later than he expected. At the very least, the guy would have to be impressed that the Jays could still acquire Branyan after his best season in the majors, especially considering that the other object of his affections in those days was the otherworldly talent of Ruben Mateo.

Our thoughts on Branyan
Even if he did manage to put up some numbers last season, Branyan is still an all-or-nothing hack machine, and moreover, one coming off a back injury that contributed to his posting a .688 OPS in the second half of last season.

He can scarcely play a position in the field (he's a -10.0 UZR at third for his career), and his presence would merely add to the log jam of LF/1B/DH types on the roster.

Email ThisBlogThis!Share to TwitterShare to FacebookShare to Pinterest
Labels: dubious signings, interweb gallivanting, This is what passes for a hot stove

veterans will play at the expense of young talent under Cito. this is not conjecture, this is fact.

given that Snider needs to play everyday so that the Jays can know what they have in him offensively and defensively there is no justification for bringing in anyone who who might play ahead of him. The same will be true for Wallace if he comes up mid-season (or earlier).

these legacy signings make no sense for the Jays and smack of the JP "just don't be awful so i can keep my job" era, which we are all desperately trying to forget.

Everything seems to hinge on Overbay. Branyan might be more attractive if there was a need for a LH hitting first baseman to plug the hole until Wallace arrives.
At this point, with camp just around the corner, it seems like Overbay will begin the season a Blue Jay.

^^ much to The Manager's chagrin.

The REAL question is - how are Branyan's stats in MLB2K5? Because if he's a stud in 2K5, then the Jays should go for him.

I think that's the baseball game of your choice, right Tao? Or was it MVP '05?

Actually, I'm now rocking the 2K8 for the Wii after a few years of 2K6 for the Gamecube.

And I don't ever remember even thinking about Branyan in either edition.

(Chad Tracy, though, is another story, because he was awesome. In 2K Land.)

I respectfully disagree... The best baseball game ever invented was Base Wars... and on that note, the only two things the Jays need to do are find a pitcher with a cannon for an arm (literally), and equip the entire team with lasers. Oh yeah, and to lobby MLB to change the rules, so that outs are determined through 1-on-1 combat, instead of the sissy crap they've been running with for the past hundred-odd years or so. Also, we need more robots (since we lost the only one we've ever had)

Matt C, '09 The Show is amazing, but I find the learning curve on the hitting to be EXTREMELY DIFFICULT. Even on rookie, I can barely hit the damn ball.

Hillaj, Base Wars is the shit. So is Bases Loaded.

ACTUALLY I HAD 76 RBI YO

Indeed, you did good sir. I was looking at the wrong column. It's fixed.

And for the record, Hardball 5 was wicked awesome.

Super Baseball 2020 was a delightful romp through BASEBALL WITH ROBOTS AND 150+ MPH FASTBALLS HOLY JESUS.

The arcade version was especially delightful.

Nice use of "fiefdom".