Was that the problem with Scott Richmond? 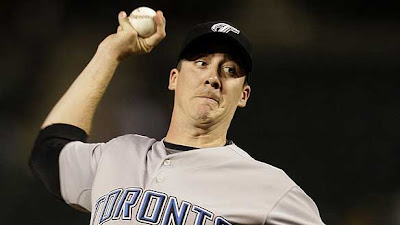 As last season limped to its sad conclusion, feel-good Canadian storybook icon Scott Richmond became something less than an afterthought. A stint on the DL followed by two months of execrable performances led us to figure that the homeboy from the other side of the country may have run out of fairy dust, and that hitters had figured him out.

So poor was his performance in the last two months that it was enough to make us forget that he had managed to win the AL Rookie Pitcher of Month for April, after posting a 2.70 ERA in the early part of the season. By the time the final month of the season came around, Richmond's ERA soared to 9.46, while he was getting hammered all over the park, with a HR/9 of 2.78.

Now, with the news that Richmond is suffering from a should impingement and will miss some significant time, the pieces of this story seem to all fit together a little more snugly. And while the possibility exists that this injury is the harbinger of something worse, and that Richmond may have really torn some stuff up in his shoulder, we'd prefer to take the positive outlook and assume that once ScottyBoy has dealt with all of the ouchies, he'll be back in April/May form.

Or so we hope. Then again, was anyone putting any stock in Richmond at this point?

As those sage fellas over at the Drunk Jays Fans rightly point out, this is precisely why you invite a ridicuous number of marginal pitchers to join you in Spring Training. For those of you playing the home game, bump Dana Eveland up one slot on depth chart.
Posted by Tao of Stieb at 1:56 PM

Oh, you shouldn't have!

Bring Rod Barajas Back! BTW he is not signing elsewhere so fuck the B draft pick, he might go to Japan instead........

This is what he gets for being photographed in a Boston Red Sox hat.

Maybe Scott Richmond's April was his true talent, however I'm not all that dissappointed that he has an injury. With a starting rotation that includes Romero, Morrow and Marcum, I was starting to worry that Richmond might get a spot over one of Brett Cecil or Rzep. As it is I'd prefer Eveland, a healthy McGowan, Purcey and even Tallet getting a rotation spot over Richmond.