Finding an uneasy peace with Cito 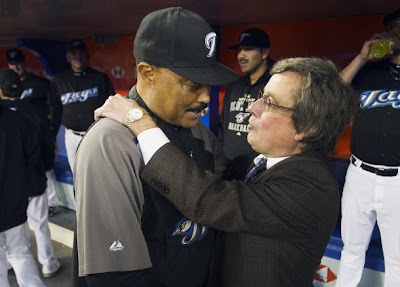 It's hard for us to even conceive of someone in Blue Jays history about whom we feel more conflicted than Cito Gaston. If we ever do write that book, there's a full chapter to be written on him. (And it will be undoubtedly as densely confusing as anything William Faulkner could have ever conceived.)

On the one hand, we concede that he was that even-keeled influence that helped to guide them to their most hallowed heights, and while his value to those teams is an open question, it seems overly curmudgeonly to begrudge him his proper place in the team's pantheon. On the other hand, he's the stubborn man whose management acumen seemed to decline in tandem with the team's efforts to rebuild.

It's half the reason why in our head, we've turned him into a series of different individuals, if only so that we can simplify him and wrap our head around who he is and what he means to the franchise...and more to the point, what he means to us. (Hence, our reliance on the coy term "The Manager" all season long. Because "Cito" and "The Manager" are two very different entities, so far as we are concerned.)

We have lots of fond memories of the 1989-1993 Cito, which may have something to do with the frustration and heartache that came with watching Jimy Williams precede him. Cito, at that point, seemed like a breath of fresh air, and a cool cat who didn't need to constantly muck about with the pitchers and slavishly follow "the book". Jimy loved the platoons, and loved the lefty-lefty matchups, almost to the point of distraction.

(The Russians had an expression, and we're sure to share this again soon: If you think the last Czar was bad, wait until you see the next one.)

Even that era has its warts that now go unnoticed when set against the bright lights of the championship teams. Part of the exuberance around the 1992 win was that it came on the heels of a few major disappointments, including the 1990 team that led the division in the last week, but finished 2-6 and coughed up the AL East to the Red Sox in the last weekend. And at that time, Cito didn't cotton much to some of the criticism that was leveled at him from the fans and the media.

And that defensiveness would return from 1994 through to his exit in 1997, where the Blue Jays ran aground as young players (Carlos Delgado and Shawn Green in particular) were mishandled and benched in favour of marginal veterans (Mike Huff, Ruben Sierra, Darnell Coles, Juan Samuel), and the team underperformed while squandering the talent available to them.

On the whole, we're probably not overly agonized about his latest incarnation as the Vaguely Cynical On-Field Marketing Campaign, given that some of the coaches who came along with him -Dwayne Murphy in particular - have seemingly paid dividends. We're still anxious for him to vacate the seat, and we're happy to think that Travis Snider and J.P. Arencibia might get a fairer share of at bats in 2011. Still, we can't necessarily call his time with the team disastrous.

From what we could tell, folks were pretty happy to say their farewells to the skipper last night, and we're sure it was a nice moment for those who like Cito. On a certain level, we think that he probably personifies a nostalgia that most of us continue to hold for those days when the Jays we a consistent contender, and when the game held the city and the country in rapt attention. Give it a year, and we'll be back with you all, getting weepy at the mention of his name.

(And because those feelings don't die easily, we're pretty sure that Cito will get many more opportunities to stand on the Rogers Centre turf and wave to the fans in the years to come. You'll barely miss him.)

The thing about nostalgia is that its a comforting thing, but not something that you can indulge in for anything more than a passing moment. Yesterday, T'Pau's "Heart and Soul" popped up on our iPod, and we were instantly brought back to those days in the late 1980's. They seemed so fun, so simple, so exciting and so filled with promise and we longed to be there. But you can't let yourself be governed by those thoughts. They'll weigh you down, like the most pleasant one-tonne down comforter you could imagine.

Like we've said here before: Change is persistent, and relentless. And if you to stay ahead of it, you need to take your eyes off the rear view, and start looking forward. And speaking for ourselves, we're plenty excited to see what lies ahead.
Posted by Tao of Stieb at 12:51 PM

YOUR SMOOTH, GRAVY-COLOURED SKIN WILL BE FONDLY REMEMBERED BY THIS CITY!

MY NAME IS ROB FORD AND I APPROVED THIS MESSAGE!

A real fair piece, sir. Well done. And the conficted notion of Gaston as the manager is valid. You had five years of success (except for the last week of 1990) and then a whole lot of nothing. Like always, the manager gets too much credit for the good times and too much blame for the bad.

Gaston, at best, gave the organization class and pride and he didn't leave it worse off then when he started it. He's rightly an icon for Toronto fans, but there have been better managers.

Well said, as always. I think this season more than last, in my efforts to defend Cito, it went right over my head that "Cito" and "The Manager" might be two different entities. That makes sense. While I'm plenty excited, too, about what lies ahead, I think I have a greater tolerance and love for nostalgia than anyone else around here. What this team accomplished when Cito came aboard, until the strike, was simply amazing. And I took it for granted. I never thought 1993 would be the last time the Jays would make the playoffs, and that I'd go through all my 20s waiting and waiting for an October that would never come. Fuck it, let's celebrate it.

Can I just add that Jon Heyman can fuck right off!

Please...Anytime that anyone feels the need to tell Jon Heyman to fuck right off, they should feel right at home.

"On Roy Halladay and the Persistence of Change" might be my fave Tao post ever, by the way. Top-5 for sure.

Probably my favorite too.

"And at that time, Cito didn't cotton much to some of the criticism that was leveled at him from the fans and the media."

Captures my Cito feelings pretty accurately. Obviously, he brought something to the table, but his 92, 93 teams were so awesome, the championship was his to lose, not win.

Cheers, Cito, but, please, let's get down to business.

Hopefully, those 4 first class tickets were one-way. Ha! I kid!

Interesting use of the word "cotton," all things considered.

Tao, you have my sympathy. I know you didn't use cotton ask some sort of backhanded racial slur. We live in interesting times. A post-racial mindset can land a person in hot water when one chooses a perfectly reasonably verb.

great post. You know, except for the subtle racial slur.

Only white people live in a post racial mindset. What a stupid concept.

Cito Gaston is and was awesome. I guess some of you saberfags might argue he 'cost' the Jays games while conveniently forgetting your other rule about managers not really contributing much to a team's success.
In which case, I'll gladly take the 2 WS championships, you take the 30 extra wins spread out over 10 years. A$$hats.