Won't somebody think of the coaches? 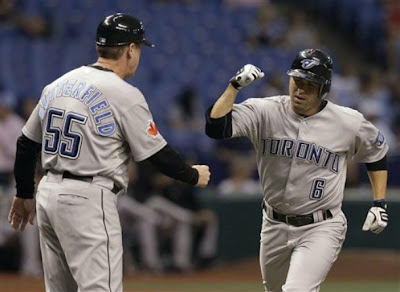 As the season has progressed, and we've gotten ever closer to bidding a final, satisfying farewell to The Manager, we'd say it is fair to assess that there is a certain degree of excitement about the possibility of a new skipper for the Jays in 2011.

The quiet process of whittling down the list of possible candidates has chugged along, with young Mr. Anthopoulos narrowing his gaze from from 200 persons to 40 to 9 (allegedly, if an off-handed remark from Beeston on PTS is to be believed). There have been many names tossed around by those of us on the outside, generally with our own particular take on what the team needs (Fredi! Bobby V! LaRussa! A big name! A development guy! Canadian Guy! Joe Maddon!)

And while we're rather enthusiastic about a new face at the helm of the on-field management, we've been really quite happy with the state of the coaching staff, to the point where we've made comments along the lines that the entire group should be retained. Which seemed in our own head to be eminently reasonable.

Of course, we're not one of those coaches.

Full credit to CP's Shi Davidi (who is in a neck-and-neck race with NatPost's John Lott for Beat Writer of the Year, so far as we are concerned) for shaking us out of our comfy doldrums, and pointing out in an excellent piece yesterday the degree to which there is uncertainty amongst that group of esteemed gentlemen.

It might have crossed our mind that Brian Butterfield might walk if he weren't given the opportunity to do more than coach Adam Lind's happy feet and fist bump players as they conclude their home run trots. But what we really hadn't played through in our mind was what might happen with Dwayne Murphy or Bruce Walton, who've both contributed significantly to the team's relative success this year.

(And really: Given the relationship that Pappy Walton seems to have developed with his crew of pitchers, does anyone want to see a brand new face come in next year to try moulding those throwers in his own image? That seems like a disaster waiting to happen.)

What we might want to happen to this team might seem like the most reasonable scenario: Keep all the good guys, get rid of the dead wood and bring in someone to lead the rest of them. But given that pride and personality tend to intercede in these times, we're not sure that such a simple solution is likely.
Posted by Tao of Stieb at 8:46 AM

Such a solution seems bloody unlikely. If Butter walks, I'll get over it. But Walton must stay. HE MUST. Then again, I was head over heels enamored with Brad Arnsberg, and his departure worked out rather nicely. This is shaping up to be the best off-season ever!!!1

I want Bobby V, but only so a Canadian station will play "The Zen of Bobby V". Does anyone know where I can download/purchase that?

I want no part of any of this fantasy Joe Maddon talk - fuck 'em! - who started this nonsense anyway? But, I am warming to Griff's push for Rays bench coach Dave Martinez.

I kind of like the idea of an up and comer, and a guy serving under Maddon would be well-versed in game management without the folksy bullshit Maddon brings (which irritates me - hey, personal prewference man).

Retaining Walton is crucial. He's the inspiration behind the cohesive group of SP. How can you knock the results (and relative health)?

You gotta think Butter goes if he doesn't get the job (though it warmed my heart to read his quote..."I want to be a Blue Jay". Fuck yes, Butter).

Murph....ah, I dunno. How much of the mashing is Murph magic vs Cito magic? And I can't get past an interview I saw with him during the season (on Jays Connected, I think) where he derided the importance of things like "OBP" and taking a walk. Because taters are where it's at, baby. Do both have to be mutually exclusive?

The only coach I hope stays is Walton because I think he's done a great job.I think Butter is stale and it bugs me Wilner pushing him 10 times a day as manager-which I think would be a huge mistake...Murphy is too focused on just hitting the long ball and forget about walks. I could be happy with Dave Martinez as well.

Funny, Ack, that your heart warmed at that thought. Because I read "I want to be a Blue Jay" as "I want to be here, but fuck you jokers if you don't do right by me."

Tao, I do know this - I want to be a weekend contributor at ToS.

Seriously though, I kinda read it as a plea to keep his job in the event he doesn't get the Big Chair. Y'know, in case things don't work out with his pal Bucky Showalter in Baltimore.

We outsiders don't know the dynamics of the relationship(s) between the "coaches" - IF that relationship is good then Butter HAS to be the new manager with Murph and Bruce back.

IF their relationship is NOT SO HOT - then hire outside and give that guy carte blanche to bring in his guys. A new head coach needs guys loyal to him.

Personally - I like Butter on my toast with Murph and Bruce as a side dish.

Coaches have to have a different look at stuff like OBP than a GM does. You don't necessarily want a player trying to change his approach in order to get more walks because that may be counterproductive.

I think the Grip-N-Rip approach has really got the most out of this group of players. Is it likely that we can teach Vernon and Hill and the like to start walking 80 times a year? This team doesn't have too many patient eyes, and the last time we saw a hacker double his walk total, he was suddenly hitting 66, 64, and 65 home runs (a la the Vitiligeous One). Can you teach patience without enduring the effects of the '08 season? (or '07, or whatever nightmare that was...)