This will all be over soon enough 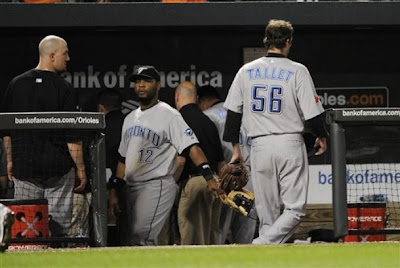 It's hard for us to even remember that moment last year when we were so enamored with Brian Tallet. "The Summer of Tallet!" we exclaimed endlessly, or at least until we tired of the notion ourselves.

But now, when we see The Manager insert him into a tie game in the ninth inning, and continue to run him out to the mound until he coughed up that motherfucker up, we irrationally find ourselves thinking kindly on the sweet solace of the season's end. It's going to be a long winter without baseball, but at the very least, we'll be able to warm ourselves with the thought that The Manager will never again have the opportunity to call on the Hipster Oaf with the 6.28 ERA and the 1.58 WHIP to enter the game in a high leverage (or medium leverage, or low leverage, or no leverage) situation and toss a brand of brutally useless junk up there that would make Frank Tanana blush.

And it's not as though the Jays are completely bereft of arms at this point of the season. It's September, for goodness sake, and they call haul whoever the hell they want from their system tomorrow if they need an extra arm. You're trying to tell me that Zach Jackson can't be at least as effective as Tallet? Or that they couldn't have called up Jeremy Accardo to give them some extra latitude at this point in the year?

(Speaking of which: Whatever sin Accardo committed and is now being punished for must be a doozy for the Jays to pay him a million dollars to go cool his heels in Vegas and not darken this side of the border with his presence. Feel free to fill in the blanks for yourself to decide what it was that Accardo did to deserve this exile.)

There are only 17 games left in the season, and we're probably going to cry like a baby when it's done. But we won't shed a single tear for this version of The Manager, nor for his pet lanky lefty.
Posted by Tao of Stieb at 10:40 AM

Email ThisBlogThis!Share to TwitterShare to FacebookShare to Pinterest
Labels: Brian Tallet, Summer of Tallet, The Manager

I too thought Tallet would be much better this year, not great, but good enough to be an acceptable 5th starter or long reliever.

Considering he's most likely gone soon it's not worth the energy getting upset over his usage/performance at the end of a 4th place season.

It's another layer to the maddening inconsistency that is Cito logic:

Refuse to give Arencibia a meaningful look out of respect for pennant races and fielding the best team and whichever other bullshit excuse is available.....but essentially concede defeat by running Tallet out there last night until the game's (logical) conclusion.

... and yeah, I get that the Orioles aren't involved in said pennant race...so then where was JPA?

one of the worst things Cito has done is make me dislike otherwise likeable players as a result of his "managerial" decisions.

Tallet is example number one. If he was a mop-up man only then we'd all love Billy.

And if you're going to go with Tallet for as many innings as it takes for him to shite the place up, why use Molina over JPA after you (rather smartly) pinch ran for Buck?

It's an interesting argument, do you give arencibia more playing time which would be at the expense of John Buck who deserves to be rewarded for his play this year?

Do you play the young guys everyday to see what you have, or is it enough to get a sense of what you have and further development if they are just with the big league club?

Do you play Snider everyday if he is not listening to coaches or making adjustments? (That play where he tagged up and got thrown out at home a few days ago must have been maddening for the coaches).

I'm not sure I can say one way or another what is the right thing to do. However I can understand as a fan that I'd rather see the young guys play.

I've never been so angry over poor managerial decisions, but I can't take the retardation that fills the mind of Cito's any longer. Tallet should never have been pitching in the 9th inning, let alone the 10th and final 11th. How many times can a manager play with fire, especially with the worst relief pitcher on the team? Apparently 3 times.

September is supposed to be a time (at least for teams out of contention) where you see the players of the future. One's who deserve a shot to play in the big leagues after having a good season in the minors. Instead, we see JPA on the bench, and Roenicke sat down so Tallet can keep plugging away. It doesn't make any logical sense, and I will continue to countdown the days til this managers demise.

It's funny because ordinarily I'd be pissed at Tallet for giving up the winning run, but this one is all on the manager for leaving his mop up guy out there for three innings.

And the Cito Gaston Farewell Tour continues. Thank you Baltimore, you've been great!

agreed. i actually felt bad for Tally last night (most nights i curse him). there is no logic to clarence edwin's decisions (i refuse to call him the manager .... as he seemingly refuses to manage).

I find it funny that we traded off Hillenbrand to SF because he was "bad presence" and that the guy we acquired in that deal (Accardo) has now become the same thing. I still agree with the trade, lest we not forget Accardo's 30 save season. It's just ironic is all.

It's not even that difficult to find time for both Arencibia and Buck. You just stop giving Lewis and Wise starts (especially Wise), and then you either cut time to Overbay or EE. Neither of whom have a real future here.

If Overbay sits you have Lind at first (where he should be anyways if he's going to play there next year...but that's another story...), and have Buck/Arencibia split the DH/C spots. At worst, Arencibia gets 60% of the time to catch and ideally you give him 4/5 starts.

If EE sits you can do Lind-Wells-Snider in the OF (I can live with the horrible defense if it gives Arencibia some AB's), Bautista at third and Overbay at first. Once again do Buck/Arencibia at DH/catcher.

I don't understand why Buck and Arencibia can't be in the same game when we have 3 catchers. If someone gets injured you still have Molina on the bench, where he should be. It shouldn't be a situation where only one of the two can play.

The word on Accardo is that he is an asshole who is/was dating Rogers VP Phil Lind's daughter...me thinks he is wasting away in Vegas because they hate him and his supplicant ways.

top 3 areas in need of improvement in no particular order:

He also hasn't pitched well when called upon. And his low K rate in Vegas doesn't instill me with much confidence.

I don't see the same pitcher as his 30 save season. I'm guessing the Jays don't either.

Accardo was dating Phil Lind's niece (not daughter) and the wedding which was scheduled for last November was postponed. Not sure if they ever did get married, there were rumours that he was asked to sign a pre-nuptial agreement, he was cheating on her, etc. Who knows what really happened?

While we're hating Cito (racist!), let's save some hate for Beeston, who just had to give him a spot in the office for next year. Just get them the fuck out of there forever.

Godfrey then Beeston. Really? That's the best they can do?

Suddenly, the Interbrew Days don't seem so bad...naw, they were bad.

If only Jim Balsillie loved baseball.

Yes, niece Carly and they had a child last month.

I think I'm done watching Jays games this year; it's just too frustrating. Not that it matters either way since fucking Rogers decided to quit broadcasting games on any channels to which I can actually subscribe.

Is it possible this isn't what has happened?

If AA had the clout to tell his manager to get his fucking head out of his ass and quit letting Snider rot on the bench, you would think he'd be able make the same demand regarding Arencibia. Or the million or so young bullpen arms who get to watch Brian Tallet's quest for rock bottom.

I think AA's been told to just let Gaston do whatever he wants this year "out of respect for his winning ways." The REAL building process starts next year - hopefully under a manager who isn't a dinosaur, a hypocrite, or a retard.

I really hope you're right, and that this really is Clarence's last season as manager.

Maybe I'm paranoid, but I have a sneaking feeling that if the offseason managerial search doesn't go well, there will be a movement afoot to bring Clarence back, and take another look at the manager question after 2011.

"Look at Bautista! Look at how well the team did under Cito, when everyone thought they'd be lucky to win 70 games! Look how they played the year he took over from Gibbons!"
Those are the sort of things we'll be hearing.