And on the second day of Drabeknuhkah... 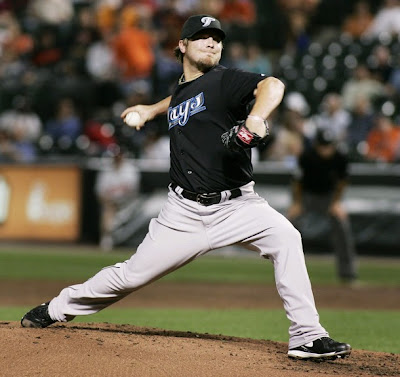 ...we light our second candle on the Pitched-Like-A-Man-orah and look back at the first day in awe, wonder, and appreciation.

(And we realize that the Jays lost the game and got swept by the lowly Orioles, but still: Kyle Drabek! Throwing stuff!)

Before we hand over the proceedings to some other folks, let us reiterate our tweet from last night: We really like the looks of Drabek's delivery. Technically sound and strong without a lot of added jerks or twitches or kicks, Young Kyle's delivery looks efficient and easily repeatable. Maybe we're getting caught up in the heat of the hyperbole, but we'd compare his delivery favorably to Roger Clemens' in his heyday. (Hopefully, without all of the needles and shagging of country singers.)

Okay, we obviously have little perspective on this, so let's hand the reins over to commenter Jim Briggs, who was fortunate enough to be in attendance at Camden Yards last night to see the start for himself. Jim reports:

The first thing we noticed was just how young Kyle looks. He's really a kid, and at 22 he's not at all a finished product, so we expected flashes of brilliance as well as some struggles. We received both. Drabek flashed some velocity early, hitting 99 (!) on the radar at one point, but he fought most of the night to keep the fastball down in the zone. When he didn't, he got hit HARD.

Unplayable groundballs and warning-track flyouts were in steady supply, and the nine hits Drabek allowed were mitigated by some particularly awesome defense from all outfield positions. The youngster also showed a devastating slider and an 82-MPH curve that, when mixed effectively with the heat, baffled some pro hitters like Adam Jones. Drabek was particularly strong after a rocky first with a 1-2-3 second inning, where he fanned Jones looking, sat Matt Wieters down promptly, then got Corey Patterson to fly out to left.

The kid was helped out by one John Buck plenty of times, especially when his breaking stuff was in the dirt. Despite the loss, tonight was one of those nights that reminded you why it might be worth keeping John Buck around. He was able to keep Drabek calm and help him through a prolonged bout with the strike zone in the third. It was alarming to see him walk Cesar Izturis on four pitches, then issue another later in the inning, but a nice 6-4-3 double play bailed him out. These things happen.

One thing Drabek is really going to need to learn, though, is to challenge hitters inside with his fastball. With that kind of velocity, a pitcher has an extra tool to keep hitters off-balance, and while a rookie perhaps might not feel that to be his place, Drabek belongs, and he should feel confident in using the entire strike zone. He tried nibbling at the outside corners all night, especially against lefties, and he paid for it. The velocity dropped over the course of the evening, as was to be expected, but his fastball showed some late life in the sixth.

To say that we have a “verdict” on KD would be ludicrous at this stage, but we were encouraged to see Drabek battle through some tough at-bats against a team that is stronger than its record would indicate. What we saw was a kid who needs to do just a few things to succeed in the bigs:

1) keep the fastball down

3) use the inside corner of the plate

4) continue to hone a four-pitch selection including the heater, the already-there slider, a nifty curve and a changeup that was little used this evening (Walton time?!)

Thanks Jim. You lucky bastard.

Fangraphs' Bryan Smith says that while Drabek may have been the beneficiary of some good defense last night, his STUFF!!!1 might just make him the best of the Blue Jays young starters by next year.

Drew at GROF was so exhilarated that he made some graphs. Which in turn exhilarated us to the point where we needed to sit down. Also, Drew notes something that we were thinking last night during the game, which is that the O's looked like they were especially aggressive in getting after the new kid. (The first inning double steal, we'll assume, was intended to rattle him and get him to start playing on tilt.)

Blairsy says he sparkles. Like the flame of a Drabeknuhkah candle. (See! It all comes full circle!)
Posted by Tao of Stieb at 11:35 AM

I read the Fangraphs article earlier and was amazed to find out that Drabek's ridiculous cutter was a new pitch that most people hadn't even seen before. Insanity.

The double steal was kind of funny. Good for Showalter. We'll have to remember that the next time the Orioles have an up-and-coming pitcher starting out. But I'm not sure if any of us'll be able to remember it about a hundred years from now.

Bryan Smith confirms that the slider is a cutter and from Drew's graphs, it appears to be thrown at 92-94mph.

The outcome of the game was disappointing, but Drabek's first start went reasonably well. He showed why he is so high on the charts for prospects. I sure hope he's in the Blue Jays' rotation next year along with the other young guys they've been bringing alone nicely.

Also interesting to hear people say they didn't like his delivery, because he was throwing across his body. (Which I never thought was such a cardinal sin, but some folks do, and perhaps with good reason.)

I totally respect Showalter for putting on the double steal there. It was a pretty badass move. I respect that sort of aggression in the same way that I used to respect how Axe would choke a guy with the tag rope while Smash distracted the referee.

Young Drabek will look good leaning on the dugout rails along with rotation mates Marcum, Romero, Morrow, and Cecil next season.

Looking forward to the next 2 starts on SN1(!).

Holy fucking shit, Tao. I can't explain this, but that intro song inexplicably entered my mind the other day after catching some retro-wrestling clips. Creeeepy.

Not sure if you knew this, but pain and destruction were their middle names.

I forget to mention this in the post, but I loved the procession of starters who came up to Drabek after the game. Both RickRo and Marcum were like: "Yo dude. Bro hugs. Way to pitch like a man out there. Back slaps." And then Cecil comes in and is like: "Oh yeah man, me too. Little bro hug." And then Rzep is like: "So, I guess I should get in on this. You know I'm a starter, right?"

please stop saying that Cito is "stepping aside" or "stepping down" at the end of the season. his contract is expiring and the management has no intent to renew it. i understand if you don't want to use the phrase "lame duck" but let's stop pretending this is some grand deferential gesture on the manager's part, ok?

Yeah. That "stepping aside" euphemism pissed me off almost as much as the "Arencibia can expect to ride the pine until Buck hits his 20th HR" article. What the fuck.

I want to respect Showalter for the double-steal. But I can't. Loved Ice Cream's comments. More than anything, I wonder what the hell was going on in Drabek's head. He must have been all: "MOTHER FUCKERS!!!1" And then he got out of the inning with minimal damage. It was beautiful.

Great insight from the community in the wake of one of the more anticipated starts by a Blue Jay pitcher in recent history. Drabek's emergence makes it all the more certain to me that Toronto will try and deal one of their starts this off-season for a bat. This team needs a bat. Would hate to see Marcum go, but ...

To add a bit since I tried to sorta keep my length down: I thought Kyle responded well to the double-steal and to some of the other pressure situations. @Eyebleaf: you're absolutely right to say he was great at escaping with minimal damage. The O's have been playing with nothing to lose for awhile now, and they were definitely out to rattle Drabek early. He responded well (and again, Buck was a big help).

KD was surrounded by some great defense, but that doesn't take anything away from his performance. Certain Jays greats, though I won't dare to compare right now, were known to just bear down and focus on the player at the plate, letting the defense do its work during jams. I was happy to see that. He's certainly got the goods and he looked as comfortable in his delivery as you all suggest he did on TV.

Thanks again for the opportunity, Tao.

I'm probably late to the party on this, but the Dalai Lama is on Twitter. WTF?

Cito is graciously vacating the throne. This is the way things are done in organizations that value their history and their future. You don't see the Yankees clamoring for Jeter's replacement, rather the fan base is writing of $80+million to keep him in pinstripes till he vacates the position. Now whether or not the Yankees brass agrees is speculative but that is the way winning organizations carry themselves. I'd have assumed that a blog harking back to the glory days would have a little bit of love for the Master but you are all obviously douchebags with no loyalty.
You are all probably closest racists too. Probably love the good old boy TJ with his Nam stories and JP lackey whats his name who thought that baseball games were won with guys like Kevin Mench playing in the field.
Cito for president!

you're the closest racist!

Ack, Ch225 here in Winnipeg is now showing as SNET East, with no Jays game tonight. So I wonder if that was a 24 hour blip in shaw programming.

Yo Gil, my 225 reads as SNEast on my guide...but the schedule matches up with that of SNOne per sportsnet.ca. Jays/Sox is on reg SNWest tonight, in any event...

ok, hopefully everything's cool the rest of the way.

Im not in the closet. Everyone knows I hate Mexicans.