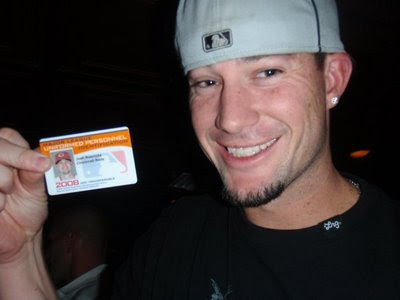 So all the angry stuff that we wrote this morning? Well, that still stands. But what sort of blog would we be if we only focused on the bullshit and negative? (Well, that's probably most blogs, but never mind that.) You don't come here to have us bring you down, right?

So join us, won't you, as we celebrate the triumphant return of Josh Roenicke.

Roenicke is on his way back to Toronto (and bringing with him lefty Las Vegas closer Rommie Lewis) after The Manager had finally had enough of looking at Jeremy Accardo's stupid face after another hit surrendered (2.25 WHIP!) and Merkin Valdez's erratic Merkin Balls. But you already knew that.

Roenicke got off to a stellar start in Vegas, giving up ZERO runs in 8.2 innings, striking out 8 and walking one. And that, friends, is what we like to see in a reliever's stat line.

As for Lewis, his numbers are okay and if you care about saves, he's got five of them. He's also rocking a 1.70 WHIP and has given up 10 hits in his 7.2 innings of work, which makes us wonder what his stuff will look like being pounded into the alleys by the Yankees.

We came into the season figuring that one of the Jays' strengths would be the bullpen. But as the Sausage King and Scott Downs get off to disturbing starts, and as we begin to find ourselves endorsing a call to the pen to get Shawn Camp, we don't mind seeing the team use some of its pitching depth to shore up the middle innings. The bullpen might be mighty yet.

While we don't want to heap too many expectations on young Mr. Roenicke, we're optimistic that he can work his way through an inning without looking like a poor excuse for a tee. Or causing us losing our will to live. Which would be an improvement.

Josh Roenicke has a website, but apparently, no webmaster
Turn down your speakers if you're at work or just don't like crappy filler synthy Action News theme songs. Then head on over to www.joshroenicke.com for all of your Roenicke-related info needs. Just be prepared to enjoy lots of Cincinnati Reds content, as someone hasn't quite kept up with the updating of said website.

(Apparently, it is DMS Elite Sport Management who are supposed to be looking after this stuff, but considering that their site has a "Under Construction" page and nothing else, we wouldn't recommend holding out for much Jays related news.)
Posted by Tao of Stieb at 11:22 AM

Roenicke will fix everything.

In other news, Brian Dopirak hit a pinch hit walk off grand slam yeasterday for the 51s to win 14-11.

Jarrett Hoffpauir also hit for the cycle in that game. PCL Playoffs!!!

And Wallace hit his 8th jyack and JPA has a .362 OBP. They feel like wrapped presents on Christmas Eve right now.

I gotta quit watching this shit for a while. By the end of these two Boston games, I have a screaming headache and want to strangle someone. Doing just enough to lose.

Tao, you still loving your pet jarhead? That's your boy with runners on base, brah. If you didn't know before, well, now you do!

Arencibia has upped his OBP to .387... he has 7 walks in 15 games so far. If he can live up to his potential, this lineup is going to be, like, crazy good next year.

The Jays bullpen has been a big surprise and disappointment. The starters are doing so well too. It's a shame. Hopefully the new recruits will help.

Going through bullpen meltdowns is about the worst a fan can endure.