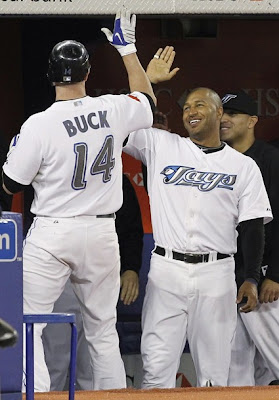 This is how The Manager has built his reputation.

A barely-above-replacement level scrub goes out for extra batting practice in the midst of a slump which has only served to drag down an already lousy year. And then The Manager steps forth, with his knowledge of the grip-it-and-rip-it philosophy, and touches the player with his wisdom and insight.

And then, after but one session with The Manager, the player goes out and hammers the ball around the yard like he was Hank. Unbelievable.

We could go into a whole repudiation of the myth and the legend, and suggest that maybe anyone could have provided a healthy refresher for John Buck to help him pull his head out of his ass. And we could also point out how a couple of the swings that resulted in those dingers weren't exactly what you would call "pretty" or "textbook".

But really, who's to argue with those results? When the legend becomes fact, print the legend.

A tribute to Windows Restaurant
We're not even sure that anyone would or could call it Windows anymore, given that it has sat as empty as Steve Simmons' head for much of the past three years. But seeing John Buck's third homer of the night rattle off the panes - now covered in advertising - reminded us of what a thrill it used to be when a Fred McGriff or Carlos Delgado moonshot would touch the glass, deep in centre field.

While we've advocated pulling the glass and creating some sort of douchebag party patio out there, seeing that homer bounce of it last night might have just convinced us that they ought to keep the structure out there. For oldtimey's sake.
Posted by Tao of Stieb at 10:11 AM

Tao, fucking awesome post. I'm laughing out loud on the bus to Philly like a Goddamn jackass. I love Cito. And I'm torn on Windows. Like you say, it's awesome when one of our boys rakes one off the glass. But, well, in my travels, I'm visiting many douchebag patio parties. And they're not all bad. The idea to get rid of the windows and make it a patio is honestly a good one. I'd go out there, sit and watch the game. And I like to think that I'm not a douchebag. Patio it up, and police the popped collars. Everybody wins.

I'm a man who enjoys a patio party myself. I think having an open patio out there would be good, if only to create some sort of sense of the Dome being a happenin' place to be.

(Then again, the fact that I just used "happenin'" to describe the place that I thought might be cool shows you how ancient and out of touch I probably am.)

And you know that if the place ever got going, there's be some chick who goes to the patio and gets liquored up and doesn't stop talking the entire game and then takes a Travis Snider liner right in the melon.

Shit. I think I just sold myself on the idea!

Douchebag Patio Party! Popped collars for some! Tramp stamps for others!

You need to pitch this to the Beest IMMEDIATELY. Hell, I'd probably up my annual visitation from one to two.

(and I'm more excited about Snider's double off the lefty than Buck's explosion of homerrific goodness. But that's just me...)

Great post! Interesting suggestion you have of the Restaurant. It really hasn't occurred to me as to how empty it really is... not to mention how LONG it has been empty. If this organization does not see a new stadium until 2020/2024 (Olympics), then I wholeheartedly agree with you by turning it into some "spot" to hang out. Minute Maid Park has something called the Conoco Home Run Porch - always packed as you can see on television.

I am more encouraged with the three walks from Hill than the three homers from Buck.

I always love it when a homer banged off that glass. Thought it was so cool. They could put the patio behind the glass?