Springtime Revelations: Alex Gonzalez is more than just a defender 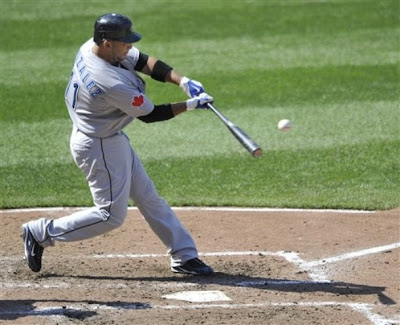 It's still really early out there, but from the first week's worth of games, we've been pleasantly surprised with the play of Alex Gonzalez.

He's certainly come as advertised in the field, looking sharp at short and making all of the plays that you'd expect and then some. He might not have the solidly spectacular skills of John McDonald in the field, but he's certainly at least 95% there. But beyond that, what has been a pleasant revelation is the way Gonzalez handles the bat.

When he came to Toronto, some figured him to be at best a modest upgrade over Johnny Mac at the plate, and further evidence that the franchise was merely treading water. But watching Gonzalez's at bats, you really get the impression that he knows what he's doing with the lumber in his hands. He looks comfortable, and we feel comfortable knowing that the best possible outcome is something more than an excuse me single or a squibber down the line that might net you an extra base if you have enough heart and grit to get it.

We're probably overestimating Gonzalez's worth based on the four early season homers, but even just to look at him, and to see the fact that he's no shrinking violet in the batters box makes us envision a season which is just that much less miserable.

Hope Opener Sadness
We hope all you kids withing easy driving/commuting distance enjoy yourselves at tonight's home opener. As for us, we'll be at home, blowing bubbles out of our nose like a sad monkey. But wave and think of us when the camera's on you. 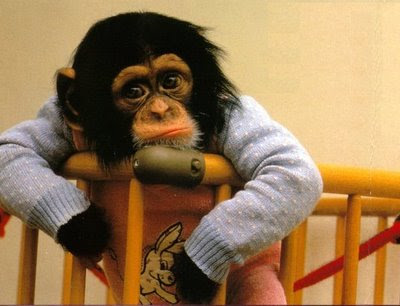 I'm within commuting distance and I don't have the money to go. Instead it's me, my dad and the game on HD. I too am a sad monkey.

Can't wait to pick up my copy of the Bullpen Gospels before the game, it is the first time I have been excited about a sports-related book in a long time

Now if only Lyle Overbay could remember what to do with a bat in his hands, we'd be ok. Let's be honest though, in spite of the awesomeness that is a 5-1 start to the season, the reality is, we're not going to continue to be this lucky. Wells has hit 4 hr's, which is already a quarter of his production on round trippers from last year. A-Gone (which he should be dubbed, at least for now), is NOT going to continue to produce this much pop. The team as a whole is hitting an abysmal .233 so far this season. Jays hitters are striking out almost 25% of the time (50 in 202 AB). Travis Snider has struck out almost one third of the time (7K in 20AB). Statistically speaking, these kind of stats are a clear indicator that the pitching staff has been keeping us close enough in games for us to get saved by late inning heroics.

I know, I know, we're only 6 games into the season, but honestly, Snider and Overbay have looked TERRIBLE. I watched Vernon Wells strike out on two HORRIBLE pitches that were almost over his head.

Can we get Ruiz a couple ABs please? If I have to sit and cuss about Lyle anymore after a week, I am going to probably be forced to resort to abusing alcohol by throwing it at the tv screen. Hell, if you arent going to use Ruiz, call up Wallace and light a fire under Lyle's butt. It makes me ill that he continues to get ABs when he's a very poor statistical player in a position that should produce power and run production. (/end Overbay rant)

Oh well, here's to hoping our pitching staff can keep it up, and that Alex Rios gets heckled worse then Bartman.

Neener Neener I will be there! I have even fashioned my facial hair into a Lyle Overstache.

To be fair, I don't why anyone would think he would only be a modest upgrade to Johnny Mac. He did afterall display power when he played in Florida, hitting over 20 hrs one year I believe. He doesn't get on base though, so I guess that's McDonald like.

I know, I know, we're only 6 games into the season, but honestly, Snider and Overbay have looked TERRIBLE.

I don't think you do know, we are only six games into the season. Some folks are hitting over .400, some are hitting under .200. None of these trends will last so why worry about the guys below .200.

Gonzo to the rescue during the spring of Tallet!

I did actually hear people say that Gonzo wasn't much more than Johnny Mac. But at his best, he could be a 20 homer guy, and put up numbers close to what Scoots managed last year (aside from the OBP, and that's no small thing.)

I'm just astonished, thought, because I had no idea that I was going to like Gonzo this much.

Snider won a game with a double off a left-handed closer.

Just let that thought sit in your head for a second, then tell me what a crappy week he had.

He won a game in a situation where people expect him to fail!

Still trying to figure out why Overbay was swinging 3-0 in the 7th yesterday....down by a run. And it wasn't like he swung at a great pitch either.

I looked at the Pitch F/X of Gonzalez' HR's and I can't quite put my finger on it. All the pitches were up in the zone, maybe he was just lucky this week?

Lucky, sure. But do you think if Mike McCoy or Johnny Mac get pitches up in the zone that they'd be turned around for much more than a solid single?

He was probably lucky, Ian. But the great thing about this game over 162 games luck will work for you and sometimes work against you.

You can't make any conclusions about this team or players at this time. Dustin;s Sideburns shouldn't get worked up over Overbay's 6 game average neither should we too excited in Johnny Mac's three hit game. This is a funny game but the ultimate equalizer because of the length.

Let's just enjoy the ride because if luck is working for us now, it is bound to bite us in the ass later.

Whoever thought an SS with seasons of 23 and 18 homers under his belt already was just a small upgrade offensively from JMac is not smart.

And Gonzo is better defensively than John "I make as many awful errors as I do highlight reel plays" McDonald anyways.

I'm with Sideburns. I know it is only a week, but if you put a loop of Overbay's ABs together, Las Vegas would give you even money on whether his eyes are opened or closed while swinging. I could accept the lousy average if there weren't so many Ks and if he would ever hit a ball hard. It's not like he's stinging at 'em balls that are just finding people. It has been pretty much an endless parade of dribblers, Ks and harmless pop ups. The same goes for Snider. Please, for once, square up a ball! Both of you!

Vernon '09 was in the house yesterday. He struck out on two balls that nearly hit him in the mush.

It's early, I know, but if this team gets a modicum of pitching and it's ruined because it can't score a few runs it will suck nuts.

Please relax on Overbay. He has never been Mr. Consistent, he has always been a streaky player. If he has a string of bad games, 2 weeks later he will have a string of good games. Have the critics never watched this guy play before?

I still wouldn't mind seeing R. Ruiz get some PA love though.

Love some healthy debate early in the season when we're 5-1. Wonder how nice we'll all be in July. LOL!

Anyhow, ok on Snider. His obp sucks, but at least he's working counts and not offering at the first pitch EVERY at bat. I am less harsh on Snider as I am on Overbay because Snider is what... 21? I dont really expect Snider to hit .300 and drive 30 out of the park this year, but, i could see it.

Not going to be sold on Overbay. I will root for him as I am a Jays fan, and he is a Jay, but I dont think he's worth his $7M. Pathetic against LHP and has lost his pop. In his defense, I'll take his above average defense with the young pitching staff though.

As a side note, I am curious what everyone things of Edwin Encarnacion (by the way, he SMOKED that homer yesterday). Does anyone think he's a part of the team vision? Or is he just a placeholder for someone else?

I, for one, can't wait until Wallace is called up and we can move on with a first baseman who can drive in runs and hit for power, because I don't think Overbay can do that anymore.

In case you're wondering, tomorrow is Holly Madison Bobble Head night for the 51s.

Gonzo sets the table, Lind brings the supper, Wells the dessert! Bottom of the third!

Extras and looks like a loss tonight because Cito thought Tallet looked like he had six in him tonight.

Looks like the ack has a role on the team. Tenth inining man!

I waved. Did you wave back?