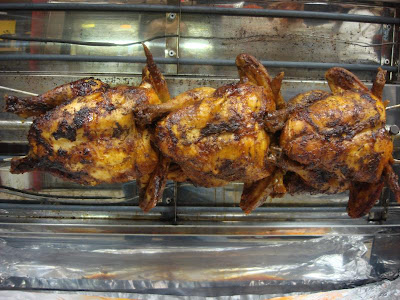 Hey kids! Do you enjoy the rotisserie as much as we do? Are you getting amped up for the coming season of fantasy baseball? Have you already purchased four roto expert guides that all contradict one another and feature mundane and self-evident strategies for your forthcoming draft?

We love us a little fantasy baseball, and we're completely geeked for this year, mostly because we took such a wretched shit-kicking in all of our leagues last year. (Something about undervaluing pitching...who knew?) We feel as though this year, if we just spend a few more weeks fretting and researching and poring over every pre-season guide, then maybe we'll be ready to go.

So geeked are we, in fact, that we've just set up the first annual Tao of Stieb Roto-Hoedown, a fantasy league for those who are regular readers, commenters, contributors around these parts. Basically, the cool kids.

We've set the league up at ESPN, which is a first for us, so we can't guarantee the performance. (It's not as though we would have anyway).

The rosters are 25-man, with a seven man bench, nine offensive slots and nine pitching slots, with two DL spots.

The plan is to live draft this baby sometime in March. We've left this to be determined, since we'll have to work around schedules and what not.

How to participate
Since we've already already taken one spot in the league, there are 14 up for grabs. Fire off an email to us (taoofstieb at gmail dot com), and if we already know you and like you, then you're in. You'll have to set up an ESPN account to join the league, but the process is pretty quick and painless.

If we don't know you from a hole in the ground, then make the case as to why you should participate, and swear on your momma's health that you're not going to bail as soon as your team goes into the crapper because you picked Pat Burrell in the first round.

This is pretty much first come, first served, so get in quick to avoid disappointment!

What you win
Err...nothing, really. Cameraderie? The sense of a job well done? We don't know...we've actually got a handful of spare baseball books that we might be able to throw in...T-shirts maybe? Really, we just want to play for the fun of it. (If you are looking to gamble, then go check with the dudes from Drive This at the Score.)

How much are we going to discuss this league on the blog?
Not much, really. There's not much that's more painful than reading about how someone's streaming strategies with middle relievers has led them to the exalted glories of fourth place.

Which isn't to say that there won't be plenty of shit-talking and general ironic douchbaggery over on the actual league home.

So what are you waiting for?
Get off the couch, get to the computer and dial the number on the screen! Hot women are waiting to take your call!
Posted by Tao of Stieb at 10:57 AM

Email ThisBlogThis!Share to TwitterShare to FacebookShare to Pinterest
Labels: fantasy, The Tao's Roto-Hoedown

would kill for a powder blue tao of stieb or even steib t-shirt.

does this mean anonymous posters who can't make the effort to be either informative or funny are out?

I'm neither informative nor funny, but am hoping my "contributor" status earns me a green light.

You may have to grovel a bit, but we're sure we'll probably say yes in the end.

I DON'T NEED THIS BULLSHIT!

Is it too late to replace some of the offensive stats with defensive stats? I somehow doubt Plus/Minus is available at ESPN, but counting stats like Putouts and Assists should be available.

Torgen-I hope you're married, 'cause nerd talk like that ain't never gonna get you laid.

We could change the categories, but we're not big fans of the defensive ones. We like the crack of the bat.

Plus, we don't want this to be some 10x10 league where you end up punting half the categories because you couldn't be arsed to check who is getting a ton of holds over the last 15 days.

We could change the categories, but we're not big fans of the defensive ones. We like the crack of the bat.

Plus, we don't want this to be some 10x10 league where you end up punting half the categories because you couldn't be arsed to check who is getting a ton of holds over the last 15 days.

We will not repeat ourselves.

We will not repeat ourselves.

I'm not suggesting going crazy on the number of categories. 5x5 or 6x6 is fine--I just think the position players should be judged on their defense. (Also, it makes stock draft advice less applicable.)

Defensive stats in a roto league are like a huge black bruise on a stripper's body: it kinda takes all the fun out of the fantasy.

I don't know about you, but my fantasies include Aaron Hill making a diving stop up the middle to turn a walk-off single into a game-ending double play.

I was at that game Torgen, that DP stayed with more longer than actual DP.

Where the fuck do I sign??? Oh, the email address. Duly noted.

stayed with ME longer. dammit

Get in there Lloyd...there's only five spots left.

And JP picked up another waiver pitcher, WTF?

Not knowing the difference between 10x10, 5x5, or 6x6, I will assume this league is out of mine. Does anyone have advice on where a rookie Fantasy Leaguer (with no experience whatsoever) can learn how to be a valuable contributer to a low-stakes league?

5x5 means 5 ranked stats for position players and 5 for pitchers.