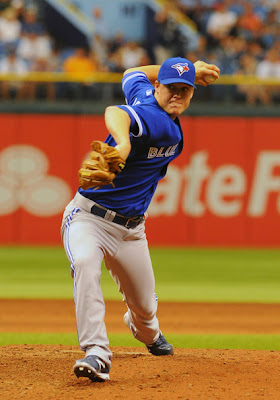 Who: Aaron Loup. Left-handed relief pitcher. 5'11", 205 lbs. 25 years old. Still listed with jersey number 62, though that seems like a number you give to non-roster invitees.

Provenance: Born in Raceland, Louisiana. An hour west of New Orleans. Drafted out of Tulane University in the ninth round of the 2009 amateur draft by the Blue Jays. Received a $100,000 signing bonus.

Contract Status: Contract purchased by the Blue Jays in July 2012. No contract for 2013 as of yet. Has accumulated 83 days of Major League service time. Remains under the Jays' control for the foreseeable future.

Recent Injury History: Missed two months with an unknown injury at the end of 2010, and started 2011 on the DL.

Looking Back: As far as surprises go, there are few in 2012 that were as unexpected or delightful as Aaron Loup. (Actually, there were few pleasant surprises at all in 2012, but let's not focus on that.)

Few would have imagined before the 2012 season that Loup would emerge to be named the Blue Jays' rookie of the year. But with the cavalcade of busted pitching limbs thrust him onto the roster and into the bullpen fire mid-way through last season.

It wasn't hard to like Loup when he appeared on the scene: A lefty who throws a hard sinker with a funky side arm delivery is as aesthetically pleasing as all get out. For an unheralded rookie, Loup's appearances became must-see events and high points of the latter stages of the season. His effectiveness was the delicious icing on the cake.

In terms of setting himself up for a future role as a bullpen southpaw, Loup did a great job of nullifying left-handed batters in his somewhat abbreviated first go-round. Of the 60 lefties he faced, he gave up just 12 hits, two doubles and one walk while striking out eleven. And while his numbers were slightly higher against righties (.268 OBP, .370 SLG), but he was still effective enough not to be immediately pigeon-holed into a LOOGY role just yet.

If there is a reason to pull back on the reins of our enthusiasm for Loup, it's the fact that not all of his minor league numbers necessarily point to this sort of success. He posted a 4.66 ERA in high-A Dunedin in 2011, and a 4.54 the previous season in low-A Lansing. Also, his big league BABIP of .277 seems likely to rise, with some of the other numbers sure to follow.

Still, his strikeout to walk ratios have been impressive enough to thing that he can miss bats and keep free runners off base.

Looking Ahead: As good as Loup was, he'll be hard-pressed to make his way into the 12-man bullpen that Manager John Gibbons says he'll carry to start the season.

Gibby has pledged not to weigh player options into his considerations of who makes the team out of spring training...but with Darren Oliver being a lock - barring injury - and Brett Cecil out of options, it creates a very narrow opportunity for Loup at the outset of 2013.

On the other hand, depth is a beautiful problem to have, and Loup is well-positioned to slide into the first available slot in the bullpen, whether if it opens in March or April. And those slots always do.

Pessimistically: Comes back to reality to become. Spends time in Buffalo and serves as a depth arm at the bottom of the pen's pecking order. Is still forced to carry the Dora the Explorer backpack filled with candy.

Optimistically: Maintains something close to last year's performance, and is relied on in high-leverage situations to snuff out rallies and befuddle lefties. Develops a cult following. Gets a lower jersey number.
Posted by Tao of Stieb at 4:28 PM