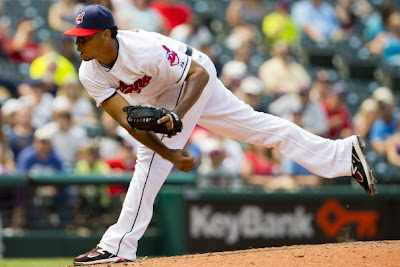 A note from the Blogger-in-Chief: Once again, I'm undertaking a prolonged player-by-player preview of the Blue Jays roster. Granted, it's rather silly. But it provides much needed focus and enthusiasm for the blog, even if only for a fleeting few weeks.

This is the first of this year's series, and there will be 37 in total, because that seemed appropriate. Though I do wish that our Patron Saint had maybe chosen to wear the uniform number 27, or 14, or maybe 6.

Provenance: Santo Domingo, Dominican Republic. Signed as an amateur free agent by the Colorado Rockies in 2003. Acquired by Toronto from Cleveland on November 3, 2012 in exchange for Mike Aviles and Yan Gomes.

Contract Status: Arbitration eligible after this season. No options remaining.

Injury History: Missed half of 2011 with a right shoulder strain.


Looking Back: Rogers is another converted infielder in the Jays' bullpen, having made the switch from shortstop to pitcher in 2008 while in the Rockies' system. He served as a starter through most of his post-transition development, and advanced on the strength of his velocity and some decent strikeout numbers. By 2009, he was posting impressive numbers with Tulsa in the Double-A Texas League (2.48 ERA, 83 Ks, 19 BBs in 94.1 innings).

Unfortunately, life at a mile-high altitude was as harsh on Rogers as it is on many other pitchers, if not more so. He posted middling numbers at Triple-A Colorado Springs, and in spite of a promotion in late 2009, the Rockies would spend 2010 shifting him from the rotation to the bullpen (28 games, 8 starts) and back to the rotation in the PCL (12 games, 11 starts).

Rogers was plagued by injuries and ineffectiveness in 2011, and was BABIPed into oblivion (.425) last season before the Rockies gave up on him and essentially let Cleveland take him of their hands for nothing more than "cash considerations", i.e. the remainder of his contract for 2012.

What happened after the trade was something of a revelation. Freed from extreme conditions of Coors Field, Rogers' BABIP normalized (.294), and his walk rate dropped from 13.7% to 5.5%. In 53 innings for Cleveland, he posted a 3.06 ERA and struck out 54 batters, his best showing as a professional pitcher since leaving something closer to sea level.

Looking Ahead: Rogers' acquisition will be lost amongst the hullabaloo that ensued over the following two weeks, but this was a canny acquisition by Alex Anthopoulos. If we still care in this day and age in finding undervalued assets, then AA may have plucked a gem out of Ohio.

After reviewing a handful of his outings from last year, it seems as though Rogers gained confidence in throwing strikes after the move. As someone who doesn't typically watch a lot of Rockies' games, you forget how big that ballpark plays, and Rogers' approach in Colorado was an obvious and understandable avoidance of any part of the plate where the ball could be put in play.

In the outings with Cleveland, he threw more strikes and gave up some contact, but his stuff was enough to minimize that contact into foul balls and fly outs. He backed off the curveball and threw a more typical power reliever's mix of fastball/slider, and was helped along by a much better defense backing him.

In a packed bullpen, Rogers will have to impress to keep a spot in the long term, but his lack of options makes it seem certain that he'll at least get the courtesy of a spot on the roster heading north. You don't just give up Yan Gomes and Mike Aviles for nothing, right?

We're probably just a sucker for him, but the feeling here is that Rogers will stick based on merit, and might eventually get into the mix for slots in the later innings. But considering that high leverage innings can happen earlier in games, a reliable reliever with "closer stuff" can make a big difference in putting out fires in the middle innings, helping find the extra few wins that the Jays might need in the end.

Worst-Case Scenario for 2013: Goes back to picking and nibbling, and can't reliably find the strike zone. Jays try to hide him in the bullpen until such a time as they can DFA him without losing him.

Best-Case Scenario for 2013: Emerges to become a big arm at the back of the pen. Locks down middle innings and bails out starters. Eventually moves into the mix for save opportunities. (For whatever that's worth.)
Posted by Tao of Stieb at 8:31 PM

I think Anthopoulos has quietly built up great bullpen depth with Santos, Delabar, Perez, Rogers and Cecil all under control for at least the next four years. I would have thrown Brad Lincoln's name into that mix as well, but it seems the Jays want to try him as a starter again this year.

Relievers are volatile, so that's not to say the bullpen is set for the foreseeable future, but it seems like a solid foundation to build on, if 3 or 4 of those guys turn out to be useful pieces.

Worst case scenario: Rogers suffers season-ending injury, returns home to the DR for rehab, is kidnapped from second-storey bedroom by a German expat, is dropped by kidnapper while being carried down the ladder, dies and is discarded in nearby copse of trees.

Is there any chance that Esmil is the bastard love child of Ted Rogers and a Dominican woman? Just saying, it would be cool if that was why they brought him in to the fold.

People love the best/worst case stuff. If he can keep his ERA under 4.00 I'll be very satisfied.