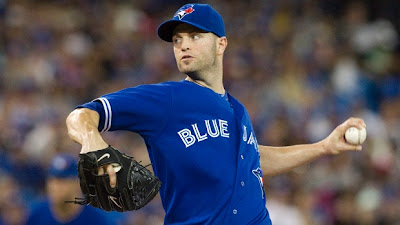 Provenance: Peru. (Illinois, that is.) Drafted in the 3rd round of the 2004 amateur draft out of Northwestern University.

Acquired: Came to the Blue Jays in the massive mid-season deal with the Houston Astros on July 20, 2012.

Injury History: Missed the last month of 2012 with a broken foot. Also missed three months of 2010 with a left forearm strain.

Looking Back: By the time J.A. Happ arrived in Toronto last July, most Jays fans had just about abandoned hope on the season. The outrageous misfortune that befell the pitching staff left the team in such a state that Happ’s appearance seemed like disaster relief as much as anything else.

Oddly, the Jays brain trust immediately shoved him into a bullpen role, figuring that they’d rather see more starts from Aaron Laffey, Brett Cecil and the decaying corpse of Ricky Romero and his frayed left arm. After pushing the issue with the square-jawed chief-in-charge, Happ eventually wedged his way into the rotation, and the results were respectable if not spectacular (4.59 ERA, 39 Ks/12 BBs in 33 innings.)

Ultimately, though, no Jays pitcher could escape the grim hand of injury last season, and Happ eventually succumbed to a nasty break on his planting foot, resulting in his missing the balance of the season.

At his best last season, Happ showed what a decent left-handed starter with a dash of heat could bring to the table. Successive starts in August against a tough Texas lineup and a decent Tigers lineup featured Happ pounding the zone with strikes, fanning eight and seven batters respectively while limiting each team to an earned run. Yes, it’s a minute sample, but it showed that in flashes, he is more than a Quad-A or replacement-level starter.

Looking Ahead: It’s probably an exercise in narrative-building to say that the missed time at the end of the season led to Happ falling out of the Jays’ 2013 plans, even if that’s where our lesser instincts are pushing at this moment. It’s might be more fair to say that even in a rotation that hadn’t added three legitimate starters in the offseason, Happ would be a fringy candidate for the rotation at best.

At the same time, he wasn’t handed almost $4 million simply to enhance the entertainment value of the Buffalo Bisons this season. Given the injury histories of Romero, Brandon Morrow and Josh Johnson, the sixth or seventh starter needs to be a player who can legitimately step in and hold his own, especially in a season where this team fancies itself as a legitimate contender.

Happ’s role will be a thankless one in 2013. It’s doubtful that many will be happy to see him whenever he eventually gets the call. But he’s a very respectable option should the Blue Jays need reinforcements for any stretch of the coming season.

Pessimistically: Happ flounders in Buffalo, and falls behind Brad Lincoln or Chad Jenkins in the pecking order for emergency rotation slots.

Optimistically: Pitches well enough when called upon that the Jays have a legitimate pitching asset come the trade deadline.
Posted by Tao of Stieb at 11:52 AM

How do you think Happ ranks amongst all the 6th starters around the league? I would guess pretty high.

This guy was good enough for a brief stretch while with the Phillies to be on my fantasy team. It's hard to accept he is still bound for the minors, but there it is.

PS: the reading test required to post can be very challenging.

I know, the new comment system is a shit sandwich. But I was getting overrun by spambots.

It's the best option I have given the circumstances.

Understandable. The bots' ability to read those things must be getting really good.

Happ seems like the kind of player who, 25 years ago, would have stayed in AAA until his mid-to-late 20s, anyway, then been a legitimate borderline star. I worry that it's too late for him, which is a real shame. Perhaps his career path can follow Jamie Moyer's.