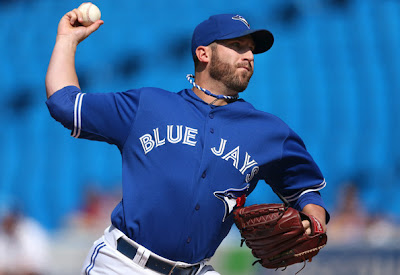 Provenance: Lake Jackson, Texas. Which is in the general area of Houston, if you were wondering. Drafted out of the University of Houston with the fourth pick of the 2006 amateur draft by the Pittsburgh Pirates.

Acquired: Traded by the Pirates to the Blue Jays in exchange for Travis Snider on July 30th. Sadness and recriminations followed.

Contract Status: Not yet signed for 2013, though that's a formality. Jays control Lincoln for this year, and hold four more years of arbitration rights after this season.

Injury History: Missed all of 2007 following Tommy John surgery. Missed half of 2011 after being hit by a batted ball in spring training. Missed most of training camp in 2012 with knee and lower leg injuries.

Looking Back: For someone who was a Travis Snider loyalist through to the bitter end, it was always going to be hard to accept the presence of Brad Lincoln on the Jays roster.

A failed starter and iffy reliever who had eked out a few good weeks seemed like a poor return in exchange for the years of pining that many had invested in the man they call Lunchbox. But with additional distance from the trade - and a lower level of pressure thanks to Snider's middling performance in Pittsburgh - we can gamely evaluate Lincoln on his own merits.

Lincoln hardly wowed the Blue Jays faithful after the trade, and the most vivid memory of his time with the team might be the six-hit, six-run boot-stomping he took at the hands of the Rays on September 22nd of last. In what was a depressingly lost season at that point, you would have been hard pressed to recall an inning where a Jays pitcher was hit harder.

One bad outing does not a season make, but unlike fellow acquisition Steve Delabar, there were not enough high points or impressive outings in August or September to give fans much to anticipate for the coming season.

On a more sympathetic note, a mitigating factor that has popped up after reviewing some of the old chatter around Lincoln from his Pirates days is the impact of the tinkering to his delivery that was done by former pitching coach Joe Kerrigan in 2010. Lincoln had been posting a decent-if-unspectacular season at Triple-A Indianapolis, but after his June summoning to the Bucs and Kerrigan's tutelage, he lost about six miles per hour on his fastball and was crushed by Major League hitters. Kerrigan was shown the door in mid-season, immediately following the demotion of Lincoln.

Does that mean that Lincoln was permanently damaged by a bad tweak? No, it doesn't, but if you were looking to find a ray of hope, maybe you could convince yourself that he just needed to shake off the ill effects of some early failure.

Looking Ahead: The Blue Jays have begun the season with the notion of Lincoln returning to the starting rotation. It's not a bad bet at all on their part given the gap that they need to bridge between their emergency replacements at the high levels of the minors and the prospects who are remain several years away.

Stretching Lincoln out and having him serve as a mid-rotation option in Buffalo gives the organization an opportunity to see if he may yet be able to fit into that role in the Majors. Even if he might have had success in the bullpen in the short term, Lincoln's value increases exponentially as a reliable fourth or fifth starter down the road.

Even if the Jays' needs dictate that he eventually returns to a bullpen role, it's better to have him stretched out from the outset rather than attempting to improvise mid-season.

Pessimistically: Does not impress enough to push himself into the picture. Remains a Triple-A depth arm next year, and a possible non-tender candidate by the end of the year.

Optimistically: Recaptures some of what made him a top prospect for several years. Performs well in Triple-A and establishes himself as the seventh starting pitcher in the Jays' depth chart. Holds his own when call upon.