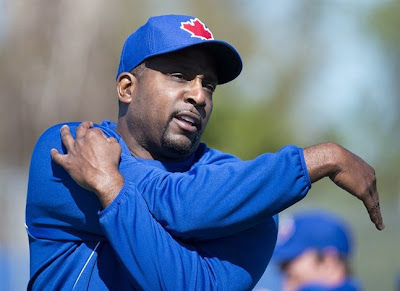 Provenance: Born in Kansas City. Graduated from Rio Lindo, California. Up Sacramento Way. Drafted in the third round of the 1988 amateur draft by the Texas Rangers.

Acquired: Signed as a free agent by the Blue Jays in January, 2012.

Looking Back: It's probably unfair that the memory of Darren Oliver that most Jays fans will carry in to the 2013 season is of the offseason contract communications snafus that became fodder for a few weeks.

It was certainly confusing, and many nasty things were hurled in the direction of the mostly affable middle-reliever. If nothing else, it reminded us of the existence of Jeff Frye. It probably also took some of the shine off that time he hit for the cycle.

Regardless, one would be hard-pressed to quibble with the results that he produced in 2012. Oliver was nasty against all hitters, stranding 84.8% of runners and holding batters to a .213 batting average against.

Looking Ahead: It's hard to resist all of old saws about the value of veteran leadership. Given that Oliver had his ulnar collateral ligament swapped out when Marcus Stroman was five weeks old, one would think he has some perspective on the game to share to two generations of ballplayers coming through Toronto.

Moreover, Oliver made playoff appearances in six straight seasons from 2006 through 2011, so the hope would be that he could provide some ballast when the tides of the season begin to toss the good ship Blue Jays about.

But the expectations on Oliver are - and should be - far more tangible than that. He's not just a cheerleader playing out the string, and to compete in what will be an extraordinarily tight American League this season, the Jays need him to maintain his current streak as one of the most quietly effective relievers in baseball.

Pessimistically: This is the season when time and age finally catch up with Oliver, and maybe he becomes a decent left-handed specialist.The Jays might need to manage his workload to get him through the season.

Optimistically: Posts a sub-2.00 ERA, pitches some of the most important high-leverage innings down the stretch in the midst of a pennant chase.
Posted by Tao of Stieb at 5:19 PM

In defence of Oliver in the offseason events, I think it ended up looking more like an overzealous attempt of Jeff Frye to help his client than an reneging on Oliver's part of his agreement with the Jays. And while he hasn't been prominent in clubhouse murmurs, I haven't heard anything but that he's a good teammate.

How amazing would it be if Oliver lowers his ERA again this season? Someone really should look up the record on that score, as six straight seasons is fairly remarkable already.