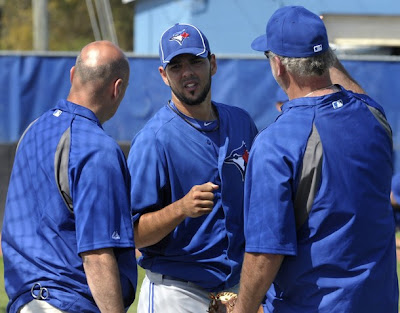 Who: Carlos Villanueva, No. 33. Relief Pitcher. 6’2, listed at 230 LBS, though he’s apparently dropped some of that weight in the offseason. 28 years old.

Contract Status: Avoided arbitration with a one-year, $2.775 million contract this offseason. Eligible for free agency after this season.

Sometimes You’re Up, Sometimes You’re Down: In 2010 with the Brewers, Villanueva struck out a remarkable 11.45 batters per nine innings. In 2011, that number was cut nearly in half, to 5.72.

Looking Back: Disappearing strikeouts notwithstanding, Carlos Villanueva qualifies as one of the more pleasant surprises of last year. We thought the move to acquire him in the offseason was particularly clever, and he may well have been the unsung hero of last year’s pitching staff. He was something of a Swiss Army knife, doing whatever job was called for in the situation, from short relief to long relief and spot starting when the Jays were short staffed. Unfortunately, the workload eventually wore on Villanueva, forcing him out of action for most of August. He finished up on a high note in September, closing the year off with a 1.93 ERA in seven relief appearances down the stretch.

Villanueva rebalanced his repertoire last season, relying increasingly on his fastball (46.2% of all pitches, up from 28.9% the previous year), while dialing back the use of his slider, curve ball. This might help to explain the simultaneous drop off in strikeouts as well as his relative success last season. Though he was less deceptive with his pitches, Villanueva’s hallmark last season was pounding the strike zone with fastballs down in the zone. He gave up fewer line drives (down 5.3 points to 21.9%), and most dramatically, doubled his rate of infield fly balls (from 7.5% to 15.1%). He also had the lowest homer-per-flyball rate of his career (7.5%, down from 13.2% in 2010), a metric that will bear watching this coming season.

Looking Forward: We’ve been dreaming lately about the notion of a 100-inning relief pitcher. We understand the notion of “bullpen specialization”, and maybe that was an experiment worth having. But when pitching staffs ballooned from a complement of nine or ten to an army of 12 and 13, it inevitably has led to less lineup flexibility and more marginal arms getting relief innings. (If you have eight relief pitchers, someone’s got to be the eighth-best pitcher in the bullpen.)

We admired the way that Terry Francona used Alfredo Aceves for most of last year, with the righty tossing 114 innings in 55 games and four starts. Aceves did a lot of work to bridge the gap between the starters and the back of the bullpen, and if Tito had been willing to give him one extra starting gig in the last week of the season, we might have a very different perception on the relative success of the BoSox’ 2011 campaign.

All this to say: We think that Carlos Villanueva can be that 100-inning reliever for the Jays in 2012. If Villanueva can continue to keep the ball down while putting a few more batters away with strikeouts, he could be a vital aspect of a successful season, and a really valuable instrument for manager John Farrell.

2012 Expectations: An early spring injury never augurs well for a long and prosperous season, though whatever is troubling Los Del V this week seems minor in nature. With a newly svelte physique and an important role in the pen, we could see Villanueva dropping his ERA, raising his strikeouts, and generally making his future free agent dollars with this year’s performance. He’ll definitely be a guy we watch closely this year.
Posted by Tao of Stieb at 9:50 AM

So, basically a slightly better and slimmer version of Litsch?

On another note, if we can use Villanueva as you suggest, do we have a real need for seven arms in the bullpen? I'd rather have Jiwan James (possible rule 5 guy) on my roster than Cordero.

Just a nit. Good work otherwise. Please keep it up.

Thanks for the arithmetic lesson, JB. I probably should have said "around half". I'm a little slow on the uptake these days.

J.B you are not allowed to comment anymore. From everyone.
Nice articles Tao. I am still finding it difficult as to where Los Del V will fit in right away (hes behind santos, janssen, cordero, and Frasor)
Seems to me he is going to have to earn his 100 innings. You could almost say him getting 100 innings means bad news for the starters.