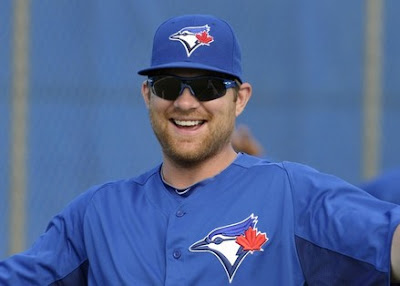 Provenance: Anderson, IN. Drafted in the third round of the 2004 amateur draft by Toronto out of the University of South Alabama.

Ear Worms Induced by the Player: “Indiana Wants Me”, by R. Dean Taylor, although we sing it as “Lind-iana Wants Me”. Also, “Stuck Inside of Mobile with the Memphis Blues Again” by Bob Dylan, because his college years were spent in Alabama's third-largest metropolis.

Back of the Class: Among qualified first basemen, Lind posted the third-worst weighted on-base average (.315), ahead of only Juan Rivera and Aubrey Huff.

Looking Back: As we’ve been thinking back over the past season for this series, there are a lot of images that flash through our mind, like animated GIFs being posted somewhere between our synaptic nodes. And one of those video loops is an amalgam of Adam Lind’s painful-looking swings from last season. We certainly don’t want to present ourselves as any sort of medical authority, but it takes a certain degree of wilful blindness not to recognize the extent to which Lind’s swing suffered because of back injuries last season.

A year ago, the greatest concern seemed to be whether if Lind could handle playing first base on a full time basis, and the Spring Training lore that was spun out dealt with the monstrous number of ground balls he took every day to prepare himself to be up to the task. His less-than-impressive 2010 season (.712 OPS, .341 OPS versus lefties) was looked upon as something of an anomalistic blip, with the memory of his Silver Slugger year not so far in the past.

But the wear and tear of crouching for hours on end to cram for his first baseman’s exam clearly physically affected Lind. After a decent start to the season (.857 OPS up until May 7th), Lind was sidelined for a month with back troubles. He returned in June and managed two very productive weeks after his rest (eight homers, 1.460 OPS between June 4th and 17th), the last half of the season was an ugly downward spiral (.247 OBP, .332 SLG from June 18th through the end of the schedule.)

As he ground through the dog days of the season, Lind’s swing became more of a wave at the ball. There was no leverage or torque coming from his legs or his core, and he appeared to be tossing his bat through the swing zone out of desperation. The harsh truth is that you can’t be a middle-of-the-order bat if your swing is all arms, and it still surprises us that the team’s on-field management couldn’t recognize how bad Lind’s at bats had become.

We also seem to find ourselves in the minority when it comes to Lind’s defense, which we thought was less than exemplary last season. Lind’s ability to pick balls out of the dirt was certainly welcome, but his ability to range to either side was decidedly weak. Lind made only 12 plays out of his zone in 965.1 innings in the field, and his “range runs” -- the number of runs above or below average, as determined by his ability to get to balls hit in his vicinity, as per Fangraphs’ Ultimate Zone Ratings calculations -- was 3.6 runs below average.

Looking Forward: That 2009 season is slipping further into the mists of memory, and the notion that Lind will suddenly find his stroke again is left to those of us who are dreamers and wish makers.

To put Adam Lind in perspective at this point, keep this in mind: Lind’s first season at first base was offensively a step down from any of Lyle Overbay’s last three seasons with the team. Now take that information, close your eyes, and imagine what the furor might have been if the Jays had insisted on plugging Lyle Overbay into the four-spot in the lineup in any of those seasons.

With a team-friendly deal, the Jays shouldn’t feel as though they are handcuffed to Lind as a key to their offense. A smarter approach to managing the lineup would look for ways to minimize the demand on Lind’s performance by placing him lower in the order and platooning him with Edwin Encarnacion against some left-handed pitchers. We doubt that the Jays will make such moves until they’re absolutely forced to do so, but a “cruel to be kind” approach might be in the best interest of the player and the team.

2012 Expectations: We hate to say a player is on his last chance, because we pride ourselves on not giving into the impatient hyperbole of fandom. But with a team that should be headed towards a Wild Card playdown within the next two seasons, Lind will either need to assert himself or move on.

On the other hand, anything below an .800 OPS is going to be a problem for the Jays in the middle of their lineup, and something that will need to be resolved in the near term.
Posted by Tao of Stieb at 1:06 PM

-For lack of a better analogy, I hated how AA indirectly threw Adam Lind under the bus this winter. Whenever the Prince Fielder debate was brought up, instead of reminding everyone the Jays had a former silver slugger and club friendly 1B player locked up for awhile, AA repeatedly just stated that Prince's contract would be a huge rip-off (which I think all rational Jays fans can agree with). I'm glad AA openly made it clear the Jays weren't and aren't interested in those types of contracts, but I wish he would have reminded everyone:

-Lind 2009
-Lind showing signs he was returning to form first half of 2011
-Lind is still reasonably young
-Good chance 2010 was an aberration and 2011 is a write-off since he was learning a new position in a year the Jays weren't going to intend
-Lind loves Toronto and married a local women (Jays fans suck that up haha).
-Club friendly contract

To be fair, I am probably just trying to defend my purchase of a Lind t-shirt at the home opener in 2010.

i guess my point is AA probably wasn't helping Lind's confidence this summer and defending Lind a bit may have helped a little bit with the Prince Fielder backlash.

It's funny, because I think I'm trying to be emotionally detached in writing these, and when I re-read them afterwards, it sounds like I'm dumping all over the players.

I didn't really intend for this to sound as negative as it did.

Lind is going to have to step up his game...but I still think he can do it. I'd love to see it.

I would have been fine with Overbay in the 4 spot in his first year as a Jay when I believe he hit damn well with a ton of doubles.

Of course then we'd have to move Thomas/Glaus/Delgado/Hillenbrand(sp?)/ whoever we had batting cleanup back then.

I really hope EE gets a game at 1B about once a week against tough lefties. It will produce better results and it will save Lind's back.

Mind you, if you're subbing a 28 year old guy once a week to save his back, he's probably not the long term answer anyway.

Also sitting with fingers crossed for Adam Lind - surely there's a happy median he can reach.