30 Jays in 30 Days - Henderson Alvarez Has It Under Control 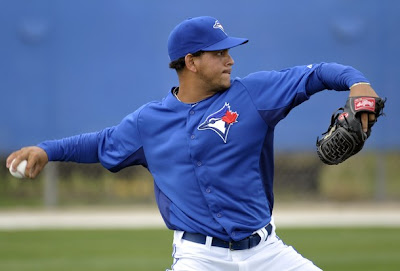 Provenance: Valencia, Venezuela. Signed as an international free agent in 2006.

Contract Status: Contract purchased at end of 2011 season. Arbitration eligibility dates yet to be determined.

Top of His Class: Among rookie pitchers with more than 60 innings pitched, his 5.00 K/BB ratio was the best in the majors, well ahead of Craig Kimbrel’s 3.97.

Overenthusiastic Comparisons: With his compact, repeatable delivery, late action on his fastball and willingness to pitch to contact, Alvarez reminds us of a certain former staff ace who may be happier to be in Philadelphia these days.

Looking Back: Henderson Alvarez has breezed the Blue Jays system fairly quickly for an international signing. He has yet to truly repeat a level, though he managed to skip past Triple-A last season on his way to his big league debut. It’s an impressive ascent when you consider that among pitchers in his 2007 Dominican Summer League cohort, only Alexi Ogando and Michael Pineda have pitched more MLB innings than Alvarez.

Some of Alvarez’ minor league numbers seem inconsistent, with his ERA bouncing up and down as he progressed through his career. He’s post a 5.63 ERA in the Gulf Coast League, then follow it up with a 3.47 ERA in the Midwest League. He seemingly took a step back in 2010 with Dunedin (4.13), and then roared back with an exceptional 2.86 mark at Double-A New Hampshire last year.

What remained consistent throughout his minor league career were control numbers that always begged for a second look. He has consistently kept his walks per nine innings below 2.0 throughout his career, and while that seemingly comes at the expense of some strikeouts, the fact that he’s been willing to pound the strikezone is a promising sign from a young pitcher.

A concern remains over the shallowness of Alvarez’ repertoire, as he threw just three pitches through his initial stint with the Jays. Moreover, he relied heavily on the fastball, throwing it 71.8% of the time, while mixing in a changeup 18.3% of the time and a slider on the remaining 9.9% of pitches. The fastball has lots of life and averages 93.3 MPH, but as a starting pitcher, one wonders how long he’ll be able to live off of a fastball/changeup mix. (That’s essentially the same mix of pitches thrown by Jo-Jo Reyes with the Jays last year, if you want a scary comp.)

Looking Forward: We love the fastball, and we love the starting pitchers who can sling it in with gusto. If you look at the average velocity, Alvarez sits in the same 93ish MPH territory as Brandon Morrow (93.9), Kyle Drabek (93.5) and Dustin McGowan (93.0). The difference with Alvarez is that he seemingly knows where it is going when it leaves his hand, and the late snap on the ball as it runs in on right-handed hitters is an image that has glowed brightly in our memories over this long, cold winter.

Alvarez’ spot in the rotation has seemingly been viewed as a fait accompli this off-season, though it will bear monitoring to see how Kyle Drabek progresses through this Spring Training campaign. If the Jays are intent on not losing McGowan – and their past roster moves indicate that they’d prefer to err on the side of not losing an asset – then either Drabek or Alvarez will likely have to pack up for Las Vegas to start the season. Alvarez is the younger of the two, and though the thought of tossing an emerging hurler who pitches to contact into the anarchic funhouse that is the Pacific Coast League, it’s not inconceivable that he’s the odd man out.

2012 Expectations: The most likely scenario remains that Alvarez makes the Jays out of the spring, and slots in as their number four starter to begin the season. He’ll be able to stick and thrive if he is able to keep his pitches down and not fall victim of the long ball, as he did in a number of starts last year.

Alvarez is still young enough that any contribution that he makes this year will have to be seen as cashing in before he’s even reached maturity. If struggles arise, there’s plenty of time to set him right and make the most out of what seems to be an extraordinary set of tools. Should he thrive, it portends very well for the future of the rotation.
Posted by Tao of Stieb at 1:10 PM

As good as his fastball is, he needs to improve his secondary stuff if he is to take the next step. He ranked 57th out of 82 AL starters with 60 or more innings pitched in 2011 with a 6.4% swinging strike rate, which puts him on par with guys like Wade Davis, Jeremy Guthrie and Rick Porcello, all of whom strike me as 3rd or 4th starters at best. That's not bad, but I think we'd all like to think he could achieve better. That said, I think it might be better for the team's long-term interests if he works on a breaking ball somewhere in the minors, away from the attention and scrutiny being on a major league roster brings.

I realize now that I missed your comment. It's an interesting one, although if he's in the zone and not necessarily missing bats, he can get by so long as hitters aren't squaring him up.

But yeah, it would be nice to see him miss some more bats.

Hey Steib - love the blog :) I had a quick question you might know the answer of.

In the back of my head I remember that Alvarez was signed along with another young pitcher from Venezuela.

Is that right or am I off base?

Do you know the name of the other pitcher if it is right?