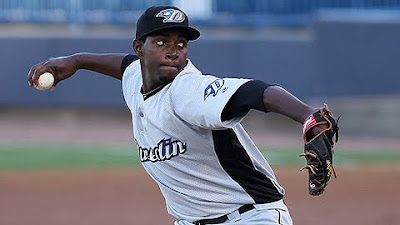 Provenance: San Cristobal, Dominican Republic. Signed as an amateur free agent in 2004 by the Blue Jays.

Looking Back: Up until last season, Joel Carreno had taken a fairly deliberate route through the Jays’ system, bumping up a level per season over five years. But a bullpen made sparse by trades, injuries and performance issues led to his unexpected summoning to the big club in late August of last season.

Carreno pitched very effectively out of the bullpen, giving up just two earned runs and 11 hits along the way. He has a fairly limited repertoire, working with a 91.5 M.P.H. fastball (41.6% of his pitches) and breaking balls (52.9%) which in some cases are categorized as curveballs, and sometimes sliders. We’d always heard that he threw the latter, so maybe a more extensive look will help to determine exactly what is coming out of his hand.

Like teammate Henderson Alvarez, Carreno has a tightly coiled delivery, with lots of tight movement on his pitches. Though we only got a brief look at him, he never seemed particularly outclassed, though he did get a lot of work in September against some weaker lineups.

Carreno also had some control problems in New Hampshire, walking 4.5 batters per nine. Though he didn’t show that propensity often while with the Jays, there were moments where he was ducking and diving around the zone.

Looking Forward: Almost all of Carreno’s minor league work was as a starter, which makes it somewhat surprising that his name is never mentioned as a potential starter for the coming season. Not knowing what he’s throwing makes it hard to figure out if he has starter stuff, and if he does rely so heavily on just two pitches, it might explain why the team is not eager to work him into that equation.

But given the options that are being floated as potential back-end acquisitions to eat innings in an emergency, we’d much rather give Carreno the fifth spot and open up a slot in the bullpen for someone else. Otherwise, Carreno might also be a very good candidate for the 100-inning reliever role which we dream about incessantly.

At 25, Carreno is probably beginning to stretch the definition of the term prospect. The Jays have him under control for the foreseeable future, and can probably bump him back and forth between Triple-A and the majors if necessary.

He’ll be on the bubble for most of the year, and might get squeezed out of the initial 25-man roster because of asset management issues. But he likely won’t spend much time in the minors, and we figure him to post decent numbers with the Jays when he gets that opportunity.
Posted by Tao of Stieb at 4:01 PM