Quick thoughts on the postseason so far 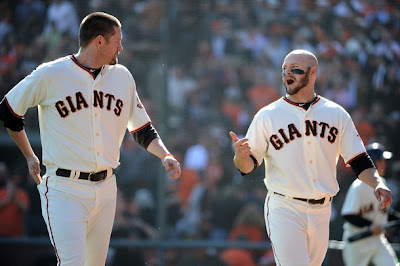 Hey kids! Have you missed your blogging pal? Because we've missed you. For reals.

Seriously, your comments, pageviews, and allegations of "fun-sucking" are generally the things that get us through the day. But now, the Jays' season is over, and we've been dunked and pulled under so deep into our real-life workload that we can't even remember what it feels like to not be breathing water.

(And now, a dramatic pause as you all feel sorry for me, because clearly, my troubles are so astoundingly profound that you wonder how I even make it through the day. And I get drunk from the chalice of your pity. Gulp.)

All of which is an excessively wordy preamble to a series of half-baked mad libs on the playoffs so far. Nevertheless, here goes:

Cody and Aubrey are dreamy dreamboats
Some of the Twitter ladies might find themselves irresistibly drawn to A.J. Burnett. And we understand, because that is how we feel about Aubrey Huff and Cody Ross. We haven't enjoyed a couple of southern-fried dudes this much since the early seasons of the the Dukes of Hazzard.

We have no proof of our prescience, but we actually thought that Ross was a great pickup this season, and were a little shocked that first Saturday afternoon game when we saw him in a San Fran uni. We realize that an OPS that hovers around .800 isn't going to make everyone weak in the knees, but Ross is an above average offensive producer who provides flexibility in the outfield. Most every team could use a guy like him.

As for Huff, his up and down performances over his career have led to us falling in and out of love with him over the years. We always seem to draft him high in fantasy leagues in the years where he falls off the cliff, and we stay far away in the years where he ends up raking. And we figured we'd steeled ourselves and were through with him, but watching him this postseason, we've found our reserve weakening.

Why baseball doesn't need a salary cap
Because when you have all the money in the world, you can't help but spend it on past performance.

Sure, pitching and defense might win championships
But mostly, it's pitching. Have you seen these rotations? And the bullpen depth? You can field a lot of Juan Uribes and Nate Schierholtzes when you have pitchers who can keep the score close against even the most potent lineups. And before anyone gets any ideas about sending some of the Jays' pitching depth here there or anywhere for last decades' DH, maybe we should think about treating those commodities as the precious jewels they are.

Texas has pitchers other than Cliff Lee
We think that the short-reliever-to-inning-eating-quality-starter transition that C.J. Wilson has pulled off this year is pretty wicked. Moreover, seeing Colby Lewis and Tommy Hunter pitch a couple of times in recent weeks has given us a far greater appreciation of the Rangers' starting depth. We spent most of the season thinking that they were a bit of a fluke, but getting a better look, we think they could be the AL West rep in the postseason for years to come, even without Lee as their ace.

That's about it
The big bad blue meanies are after your soul hero in his soul mobile, yeah baby! They about to strike. They gonna get us...

Email ThisBlogThis!Share to TwitterShare to FacebookShare to Pinterest
Labels: playoffs

Here is a review of the Jays minor league prospects for those who are interested.

I have missed you, Mr. Tao. Sorry work has been such a bear lately for you.

The Rangers are far better than we all expected. And you are right. Hopefully AA understands the value of his arms.

I love Vanishing Point so much that I wrote a paper about it's connection with the American Muscle Car for a cinema studies course in university. Such a fun movie.

Outside Cain and Lincecum, SF is one of the worst playoff teams I have ever seen. I'd rather the Yankees win than some no-talent fluke like the Giants.

Well it may be overstated somewhat, but that's how I feel, Tao. Sorry I can't share in your Giantlove.

As a total aside, I love how the four finalists for the Jays managing gig weren't/aren't candidates for any of the other managing jobs. AA is either doing something really right, or really wrong.