In AA we trust, still 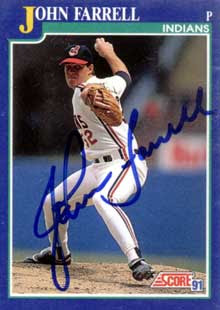 I have to confess that in the early stages of the Great 2010 Blue Jays Managerial Search, I didn't even give the name John Farrell a second thought when he was bandied about as one of the 327 candidates on "the list".

A pitching coach? With no managing experience? Anywhere?

Farrell was one of the names that had me raising my eyebrows at the lengths Anthopoulos et al were taking this exhaustive process in replacing Cito (feels good to be able to say it again). I mean, come on guys, I know you're doing your due diligence, but enough is enough. Quit fucking around with these marginal candidates and hire a sexy (in a baseball way) candidate like Timmy Wallach, or Dave Martinez, or hey - Sandy Alomar Jr.!

Then came word that Martinez didn't make the cut. Wallach's daddy didn't event let him interview with those bullies the Blue Jays, apparently. And suddenly, the hot candidate (Alomar Jr) was informed he was out of the running. And Butterfield.....oh, Butter. Was he ever really "in"? Down we were to a pair of Red Sox coaches, the venerable (I have no idea, but sounds right) DeMarlo Hale and the aforementioned Farrell. And then.... we were told that Hale was told he was out.

Say what (the fuck)?

But, y'know, like seemingly everything Anthopoulos has done in the big chair to date - it makes perfect sense. Forget about John Farrell the pitching coach. Embrace John Farrell, the coach tabbed as Francona's heir apparent. Embrace John Farrell, the former Director of Player Development for a Cleveland Indians organization which, under his watch, was tabbed by Baseball America as having the game's top farm system (2003) & made major inroads in Latin America (sound familiar?). Look at where the Blue Jays are in their life cycle - look at the strengths within the system both at the major league level (young starting pitching) and in the recent amateur draft (starting pitching).

A manager with a background as both a pitching coach and in player development? Make more sense now?

And once again, like everything Anthopoulos has done, it's a move made with an eye to the upside. Perhaps the safe pick would have been a candidate with extensive managing experience (Baylor - ugh). Maybe a long-time bench coach with a history of minor league success (Hale). I don't think anybody would have been outraged had they gone with the internal candidate (Butterfield). But that's not how Anthopoulos works. He's shown that he's willing to gamble on talent with player transactions, and the same holds true with the selection of his manager.

So far, the gambles have paid off, and we've been given no reason to believe the same won't continue to hold true. Sometimes, you've just gotta trust the process.

I think the actual managing part of a game is somewhat overrated. You can be pretty horrible at tactics, like Joe Girardi or Bruce Bochy, and still win the World Series, if you get the best out of your players. Red Sox pitchers have been a big fan of Farrell, so I think he is a good candidate from the "getting along with players and communicating" perspective.

Of course Butter was in it. The commenting from WEEI served their own purposes, certainly.
Wait for the news conference on Monday, and listen carefully to what was important to AA and the new manager.

If Farrell is the guy, then it may be a great choice. It's funny how baseball runs in cycles. Bud Black's success in San Diego this year leads to pitching coaches getting more juice in consideration.

And it won't hurt at all for Farrell to know the Red Sox very well when the Blue Jays face them. Cool choice.

I don't think Bud Black had anything to do with Farrell, though. He had a clause in his contract that prevented him from interviewing for managerial positions before this year, and Boston people already had him set up to replace Francona someday - people knew he was going to manage someday, he just wasn't allowed to until now.

it's just intuitively hard to accept that a lack of managerial experience at any level won't be a handicap, at some point in some way.

that said, experienced major league managers almost always come with the baggage of having been fired for losing. i don't want someone who has been sitting around stewing over his losing seasons for 3 years managing the team. a truly blank slate is both unnerving and promising, but Farrell will be judged on his accomplishments with this team, and not what he did elsewhere.

ultimately if this team succeeds it will be because AA brings in good pieces, not because Farrell manages them well.

I think you'll like Farrell. He's very articulate and has skillfully navigated some tricky personnel issues, like Dice K. Dice K would kvetch to the Japanese media (like that wouldn't get back to the Sox!) and Farrell was given the chore of responding to his comments. Farrell did a good job of making the organization look OK without throwing Dice K under the bus.

In short, my impression of Farrell as a "manager of men" is quite good. He was always willing to take the tough questions and he was always diplomatic. He would acknowledge problems rather than run away from them. But, he gave the impression of being supportive of his players no matter what. Congrats, Blue Jays!

Not a bad choice at all, process notwithstanding. I'd been hearing Farrell's name as a top future managerial candidate for at least two seasons now.
I think this article is free - here's a link to an interview Farrell gave to David Laurila of Baseball Prospectus in 2007 - http://www.baseballprospectus.com/article.php?articleid=6996

This past June, Farrell also made John Perrotto's list of top ten managerial candidates who have yet to manage.
John Farrell
Age: 47
Current Position: Red Sox pitching coach.
Background: Farrell pitched in the major leagues for eight seasons from 1987-96 with the Indians, Angels, and Tigers. He spent five seasons as an assistant coach and recruiting coordinator at Oklahoma State, his alma mater, from 1997-2001. Farrell returned to professional baseball in 2002 as the Indians' player development director before joining the Red Sox as their pitching coach in 2007.
Why He is Qualified: Farrell has a wealth of experience, both on the field and in the front office, and is considered one of the game's progressive thinkers. He is also able to adeptly handle all the media attention that comes from being the Red Sox' pitching coach, something that would serve him well as a manager.

Considered a progressive thinker was all I needed to read.
Definetly more excited if this is the case.

John Henry, owner of the Sox, has apparently confirmed it.

glad to start the new era.

Very worthwhile data, thank you for your article.