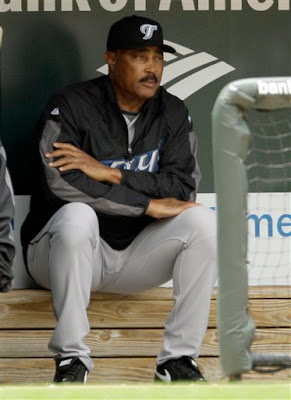 It seems as though the players in the clubhouse have had the same frustrations as us with their manager.

Rather suddenly, a bucketload of reports have come out indicating that the players have had just about enough of Cito Gaston, and are determined to see him turfed out on his keester at the season's conclusion. And if any member of the Blue Jays' playing roster is reading this, we say to you: RISE UP! Get him out of there now! YOU HAVE THE POWER!

We had a sinking feeling that it had become an inevitability that Cito would be back, as the senior management brain trust wouldn't feel like they could shitcan such a living legend, and because they couldn't conceive of how this craptastic season could be Cito's fault.

But now that the players have started an off-the-record campaign to demonstrate their displeasure, we hope and pray that this might just be enough to end Cito's reign of oblivious ineffectiveness and unconscious ineffectiveness.
Posted by Tao of Stieb at 9:21 AM

"If guys aren't happy with whatever happened here, then they're looking at the wrong person," Gaston said.

"If they're unhappy, they have to look at themselves, because I certainly treated everybody in a way that I'd like to be treated as a player and how I'd like my manager to treat me. If they're grumbling, they're grumbling because they didn't do their jobs. They had opportunities."

Well, way to take even an iota of responsibility Cito, for fuck sakes.

The offseason just got more interesting. As if we needed the drama.

I am not saying Cito is w/o fault; he has made head scratching decisions all year but this team is what we thought they were.

...and they took the field anyways!

... Sweep it clean, Beeston, JP, Cito and anyone who sticks to Cito. The "Player's Manager" title was bullshit, and those who sold it to us should be ashamed of themselves. It was something we held onto through the lack of on field moves.

For the season to end like this is just about unbearable. I hope they are all gone before the end of the ALDS.

It was bound to happen.

I think the 2009 Jays "are who we thought they were." This team wasn't supposed to accomplish much this season, and didn't.

The criticism that he was too negative and didn't coddle the young guys drives me batshit. What a bunch of fucking babies.

I bet Overbay is behind a lot of this if it's true. He's the one long term veteran that's had his playing time cut. Not only that but replaced by an old stiff like Millar.

Yeah but Accardo has no clout. This would not get reported if it was just him or some whiny rookies. It could be Wells sticking up for one of his pals too.

But I smell Overbay all over this

This whole team went to hell when they got rid of that scrumptious beast of a man named Alex Rios.

His sexy body kept morale high and attention away from Cito's antics.

God, I miss that man.

I don't blame Overbay. He actuall had a decent season and we can all agree Millar is a has-been stiff.

I think it's hard to imagine Overbay as ring leader (assuming there is one), but he's among a number of good reasons why this should happen.
I'd be down with firing joe morgan too - now there is a cause I could behind.

There is no reason for Accardo not to be considered for closer once Ryan went down. None. I'd say he did a fine job in 2007, good enough to close on most teams, and certainly good enough to warrant a considerable look two years later.

I bet it was Shea Hillenbrand.

In his comment responses Wilner has said Overbay wasn't in on this...Wilner has also posted a new blog about his very topic.

From Wilner's post "I couldn’t do anything with the story because no one would agree to go on the record with me, but never in the time that I’ve been covering this team have I seen clubhouse discontent like this."

What a bunch of chickens!

Only a matter of time before Cito complains about racism again

Overbay's not exactly a problem for the Jays this year. He's 7th in the AL in OPS against RHP for 1B (923). Ahead of some scrub named Morneau.

It's irrelevant how he does against LHP, because he shouldn't be facing them. Bautista should be facing all lefties for Overbay, especially considering the fact he's (Bautista) got a 936 OPS against them.

You put Overbay & Bautista together and you've got a cheap, effective, 900+ OPS 1B.

Seriously, the Jays have bigger issues to worry about then the fact that Overbay can't hit lefties - especially when they've got a perfect platoon partner for him.

Does that annoy anyone else? Has that become a normal way to do things in sports?

I don't think it's the right way to deal with someone you have a problem with. I'm as frustrated as anyone with Cito's lineup choices and handling of the bullpen but he deserves to be treated better than having a bunch of pussies call Wilner over "in hushed tones" and bitch.

I don't know, maybe that is an appropriate way to deal with things in baseball now. And hell, maybe the players did talk to Cito, J.P. and Beeston themselves and this was their last resort.

What do you expect Dave? That they're going to let Cito have it publicly?

Of course they won't.

But this has been simmering for a while. Overbay has said in a few interviews that he's found the playing time issue frustrating, because he doesn't feel like he can get in a groove. Snider was frustrated at how much tutelage he was getting. Accardo was frustrated with being jerked around.

The players probably see the same thing we do every night, and ask themselves why Cito refuses to put his best lineup in on most nights, preferring to take some notional longview of the situation that just doesn't seem to acknowledge the importance of each night's game.

Maybe if the team was managed a little more aggressively, they get four or five more wins this season. To guys who are as competitive as pro athletes, those four or five wins matter, even if they don't result in a playoff spot or a record above .500.

Shit's hitting the fan. This is awesome.

No, not go on the record. I would rather them keep it within the organization and talk to J.P., Beeston et al.

Maybe they did that and felt nothing was going to happen.

I think I'm just focusing on a far smaller issue becuase, of course, the players are right to be upset.

He won't be fired. He'll accept a reassignment in the organization.

Asked if it would be difficult to play under Cito again in 2010, Wells: "I cant answer that question."

Asked if it has ever been this bad in the clubhouse in the past, Wells: "No."

Tao, this is basically what I was talking about:

“I don’t know what I’m going to say yet,” Beeston said, adding that he is not happy by the development.

“If we’re going to be a (successful) organization that door's got to be open and I’ve told the players that before.”

The only regular 1B on a playoff team with worse wOBA than Overbay is Loney, and all those guys face both handed pitchers.

So this is Wells' doing it. I bet he's pissed that he got dropped down in the order. It must be Cito's fault he stunk so bad.

Right, but that's because his manager left Overbay in vs LHP when he had a perfectly capable bench bat in Bautista.

If you could tell me what Overbay's wOBA is vs RHP compared to other 1B I'd be interested. But I could care less how he does overall, because his vs LHP splits are meaningless in a platoon situation.

I haven't found a site that has EqA or wOBA splits sorted by position, but even if you take OPS, 7th in a 14 team league isn't good.

I think you've missed the point Torgen. Overbay's job is to hit right-handed pitching, which he does very well. It's Cito's job to platoon him with a lefty-masher, which he does an incompetant job of.

Seems like a bunch of non-professionals if you ask me... A 4th place team calling out their manager? Where was this discontent when the team was 10 games over .500?

Agreed. If any of the dozen players aren't Hill, Halladay, or Lind, they can eat a giant bag of fuck.

I stand corrected on Overbay...

Blue Jays first baseman Lyle Overbay pointed to Gaston's "old-school" approach and said that it sometimes does not work well with younger members of the club.

Maybe he just didn't speak to Wilner about it. (can't find where Mike clears Overbay's name to reference)

There was some indication of Overbay's unhappiness earlier in the season in a Jays pre-game interview with Howarth or Wilner (can't remember which right now), about being frustrated about being platooned. But he just said it's out of his hands.

This discontent has been out there if you read between the lines closely enough.

And I'd be willing to bet that Halladay, Hill, Snider, Overbay, Barajas, Wells, Accardo, and Downs are amongst those who are leading the charge here.

Anyone want to question their bona fides in asking what the manager is doing?

If the manager were anyone other than Cito, the entirety of the fanbase would be ready to run that guy out of town by now.

Cito, Beeston, Tennace, Leyva...all that old school group has got to get the hell out of town. It's over for them.

The Blue Jays need a new identity, and can't keep reaching back to the heyday that is utterly irrelevant now.