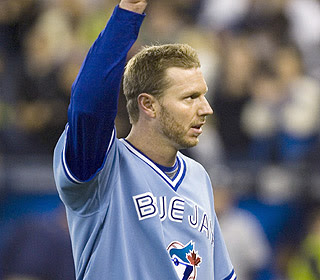 Loathe as I am to admit it, I've always been an "expect the worst/hope for the best" kind of guy (I'm sure you couldn't tell). It's a crippling affliction that has no doubt caused me immeasurable & unnecessary stress as I prepare myself for the worst.

Such was the case as I sat down to watch what could have been, perhaps, the last appearance of Doc in the powder blues. Nobody wears it better. Nobody will ever wear it better.

Halladay's last home start of the year was a hallmark Halladay effort - scattering baserunners but slamming the door when necessary, and ultimately earning the ol' CGSO. I mean, holy shit, is there anyone else in the organization even capable of doing that?

As I've mentioned in the past, I kinda sorta maybe think the Jays might actually spend a little this offseason in the hopes the fanbase will forget the shitshow that is 2009. But here's the thing, friends: would Doc even sign an extension at this point? Would you?

It was back to the cliche train in the post-game comments:

Well, at least he's not locking the door. Maybe Pat Gillick can kick it right down. What?

Special bonus post-game quote
"It was nice to have more than 10,000 people in the stands today," Hill said.

Email ThisBlogThis!Share to TwitterShare to FacebookShare to Pinterest
Labels: I don't know what I'll do if the Jays trade Doc, Pat Gillick, Roy Halladay, The Plan, The Roy Halladay Depression

Normally, I should be pissed off by comments like what Hill just said, since it's not our fault that this Jays team is a complete trainwreck. But Hill is one of the only Jays who can say whatever he wants and be totally justified. He brought it all season, and never complained. Hill for life.

Was Tao at last night's game? Is that why a Friday Rock Out wasn't posted? From what Tao revealed in last Friday's comments section, I had a feeling that he would be posting a video featuring Christine Hendricks rocking some song. I'm not sure if such a video exists, but have faith in Tao.

Yeah, Doc is a player I will definitely miss if/when he goes. It's hard to believe The Plan wouldn't include him, but like you say, his plan might not include the Jays.

The best player in the history of the Jays and I don't think it's particularly close.

I miss Randy Ruiz, whats the upside of NOT playing him? I want someone to ask Colt 45 Cito that question.