The Tao's Wandering Eye: Give us some Figgy pudding, or maybe some Zim 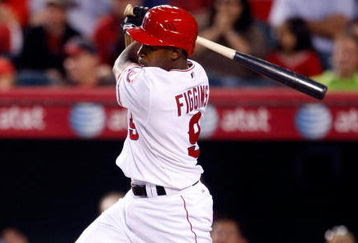 It was mentioned in the comments yesterday that Mike Wilner asked Aaron Hill in a recent interview if the player who had indicated to Lighthouse his interest in playing in Toronto had a name that rhymed with "Phone Higgins".

To be honest, we'd never been much a of Figgins fan in the past, having written him off as a bit of a slap and dash type with marginal fielding skills. Seeing him boot a couple of balls in a playoff game against the Red Sox has probably stuck with us, and we're always a bit wary of guys who put up high averages but mediocre slugging.

But in recent months, we've started to come around on the free-agent-to-be, and we're ready to start visualizing him as Jay next year, if only so that we can be disappointed this offseason.

(Although there's a good argument to be made that Marco Scutaro's numbers are better, and we fully expect our wise and sage-like readers to make that argument in the comments.)

Also, Fangraphs tells us that we shouldn't believe our lying eyes when it comes to Figgins' defense, as he ranks third in the majors amongst third basemen with a 13.0 UZR/150. Only Evan Longoria and Ryan Zimmerman (13.8 and 16.1) rank ahead of him.

Speaking of Zimmerman...
MLB Trade Rumo(u)rs' Tim Dierkes makes the argument that the Nationals should consider putting Zimmerman up for auction in order to replenish a lagging farm system. Zimmerman is in the midst of an outstanding season (.372 OBP, .527 SLG, 27 HRs and 90 RsBI), and is locked up through 2013 at a fairly reasonable rate.

And though it seems as if he's been around forever, Zimmerman is still only 24 years old, which is nearly a full year younger than Brian Dopirak, and just about a year older than J.P. Arencibia.

We're not necessarily thinking that the Nats will offer him up, but if there is a guy who might be worth selling the farm for, it would be Zimmerman.
Posted by Tao of Stieb at 11:18 AM

Zimmerman strikes me more as the next Robin Ventura as opposed to George Brett. Ventura was really good for a lot of years, a borderline all-star and a guy who could start for a playoff team, but he wasn't someone you would give the farm up for. If someone is willing to give up the farm for him, and I was running the Nats, then I'd take it, just because I don't think Zimmerman is a phenom or anything.

As far as Figgins goes, I'd be against giving him a contract because traditionally, the worst type of player to sign is a guy in / approaching his 30s. Figgins will be 32 all of the 2010 season, and because the Jays aren't on the cusp of contending, and because he's not a bonafide all-star, they shouldn't seriously entertain the notion of signing him.

That's a lot of extra bases over the run of a year.

I'm confused....why are we selling the farm for Zim? Is he THE piece? Let's stay focussed here. We aren't in a position to sell the farm for anybody.

As for Figgins, seems like a buy-high scenario to me.

This season's been hard on everybody, but I'm beginning to think Tao's lost the plot.

[Not trying to wind anybody up.]

I think Zimmerman could be even better in the next four years, and that he could be the cornerstone of a championship team.

So it's all pie in the sky.

I wouldn't argue with you on that one. I've totally lost it.

I'm playing out the string.

Zimmerman and Figgins are our "pie in the sky" now?

Rogers is the BEST at lowering expectations.

I'm all for Figgins. I'm all about buying high. Literally. Have you been in the grocery store while high? I'm sure you have. It's a fantastic experience. Sure, the bill's a lot heavier than what it normally is, but it's a ton of fun.

I hate this team. I'm afraid of what the Yankees are going to do the boys. And, oddly, I feel more confident in Rick-Ro than Doc right now. Ricky's throwing his best pitches...

Dude, one time I bought high, and I spent $120 at Blockbuster and $40 at Little Ceasars, and that's when I was a poor student.

Agree that Figgins would probably be buying him at the top of his value (like we did with B.J. Ryan). Still, if you could get him on a two or three year deal, then we do that.

Is there some reason we can't target Scutaro AND Figgins? I mean, we're going to need a third baseman and a shortstop, and there probably isn't anyone available out there better than either.

I'd take them 1/2 in front of Hill and Lind. Another big bat would be nice, but you could get that at DH and pick anyone available.

Watching the game tonight and I'm certain that Snider is a Canseco wannabe in the outfield. This kid is pathetic!

Sure, because he's not young, and there's no way he improves, or that he'll make up for it at the plate. Trade him now, while we still can!

Tao: $120 at BlockBuster and $40 at Little Caesars. That's fucking impressive.

Clearly, I was hungry. For food and for culture.

Actually, one of the videos that I rented that night was an Anna Nicole Smith "thriller" called Skyscraper (I think), so calling it culture is a bit of a stretch.

But I did buy Fargo and OK Computer on that night, as well as two pizza subs. So it all evens out.

Rogers is the BEST at lowering expectations.

Really? Figgins is in the budget now. But replacing the letters on the "ring of honour" and taking down the banners for Rios, Ryan and Rolen is too expensive an undertaking? The YES network did a bang up job of pointing out the team's foibles this weekend. Good luck with all that, Jays fan. At least they won 2 of 3.