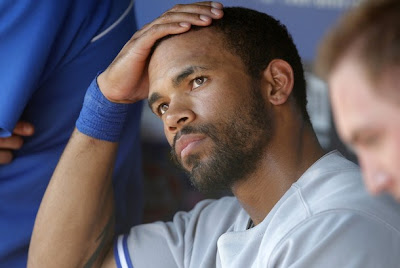 So there you have it. Two months into the season, Eric Thames has lost his hold on the starting left field job for the Blue Jays. Demoted today to Triple-A Las Vegas.

From the outset, we thought the Jays' brass was wrong on this call, and that Travis Snider should have broken camp with the team. Yes, Thames put up some decent garbage time stats late last year, but he also demonstrated for significant portions of his time in the Majors last year that he could be handled with ease by half decent pitchers. And the outfield work probably doesn't even bear mentioning.

It's in our nature to root for the underdog, so it's hard for us to get on board with the ecstatic reaction to this transaction. Maybe it's because Thames seems like a genuinely nice guy, or because he seems to be on the outside of the clubhouse cliques. He also seems like a guy who takes things to heart, so it's a little hard to be gleeful about this setback in his career.

That's not to say that we were happy with his performance (we weren't), or enthusiastic about his future prospects (we're not). Thames is a guy who can square up a mistake pitch here and there, and he'll get plenty of them in the Pacific Coast League. But without enough other skills to prop up a middling bat, there's really no long term role for him on a winning team.

For all the anticipation of this moment, Jays fans are rewarded with the reappearance of Mike McCoy. And not to be a killjoy about this, but McCoy's best OPS posted in any MLB season was a .561 last year. For those of you playing at home, that's 91 points lower than what Thames has done in this poor start to the season.

McCoy brings some roster flexibility, which the team needs at this point given the lurching wounded all around the clubhouse and the short bench necessitated by the eight-man bullpen. But ultimately, he brings a bat that will get knocked out of his hands by the vast majority of big league pitchers. So if you've convinced yourself that this is a step up, we're no so sure.

We're not sure what the next few weeks will look like for the Jays, though it would seem to us that Thames is likely to spend a while in Las Vegas. Moreover, for all of the preseason hype about the battle for left field, our guess is that Snider will be playing alongside Thames for the foreseeable future. Expect to see some additional appearances from Rajai Davis, and then a few extra at bats for Ben Francisco if and when he returns from the DL, followed by an appearance by Vladimir Guerrero within the next few weeks.

Maybe Vladdy is the carrot at the end of this stick, and that's where we're supposed to find joy. Or maybe it's the fact that the stardust has fallen from the front office's eyes when it come to Thames. Either way, the improvement to the overall roster won't be evident in the short term, and is still an open question for the next few months.

And why do we have this nagging feeling that we'll see Thames again before Snider makes it back to Toronto?
Posted by Tao of Stieb at 1:21 PM

Is this just a tryout to see if Rajai can handle left for awhile? Or is Snider still hurt and they're giving him time to recover, and see if he returns to earlier form?

So if you've convinced yourself that this is a step up, we're no so sure.

the person who is convinced that McCoy is a roster upgrade over Thames does not exist.

@ Anonymous: Snider is still hurt. Even when he comes back, he'll likely need some time to get his timing back.

The roster right now doesn't look good at all, but I'm hoping that by July 1st we'll have Vlad and Snider in Toronto and ,barring a trade, Lind as well. With Vlad up, Lind would only see time against righties and if he can get it together in Vegas somewhat, he's a better option than Cooper.

I can live with that lineup.

Mike: I saw someone on Twitter saying that McCoy was better than Thames. Which is why I wrote that. Maybe it was only one loony. But there's at least one.

i stand both corrected and affirmed in my distaste for Twitter.

Nope. That's a fictional creature right along side vampires and Yetis. I understand the flexibility this affords the team but honestly couldn't they send up any one of thief prospects instead? McCoy is an out waiting to happen.

Hey dave. Are you like me and allmost givin up on this blog. I miss it a lot. Sportsnet runed it. Boo urns. Love your old giant fan. Mckenna217@hotmail.com