How's She Goin', Eh? A Glance Back at the Season Thus Far 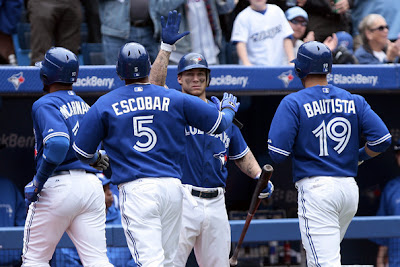 While we were off in a deep trance for the past week or so, the Jays snuck past the one-third post of the season. And while they don't hand out participant ribbons or playoff spots for a respectable fraction of the season, it at least feels to us as though we've reached the point where we can attempt to assess what has happened without being beaten about the face and neck with large clubs marked "SMALL SAMPLE SIZE!"

(And on that: It's gotten out of hand. So stop. Yes, small sample sizes are not predictive of future performance, so if we were to tell you to expect David Cooper to end his certain-to-be Hall of Fame career with a .981 OPS because that's what he's done so far, then fine. Beat us with that stick. But we just want to look back on a week or a month or a portion of a season or a frickin' at bat for criminy's sake and say "hey, that happened", so just back off and let us have a moment of peace. You can feel smugly superior on your own time.)

With that little rant out of the way, here's a few idle observations from your delinquent blogging pal.

The Hittin': Here's the thing that confounds us about the Jays so far: They rank 10th in the AL in OBP (.314), the "dumb" stat we sometimes point to as being the most important. But while they are making lots of outs, they are still scoring 4.88 runs per game, and sit third in the league behind the Rangers and Red Sox and ahead of the Yankees.

Their .421 slugging percentage (5th in AL) and 40 stolen bases (also 5th) might point to the fact that they are just effective enough in getting their baserunners over and getting them in. Or maybe they've been fortunate so far. And if adjusted OPS is your thing, they have posted a 97 so far, which more or less means they've been below average so far.

Another of our preferred metrics is isolated power (ISO). It essentially measures how hard a team is hitting the ball, though we like it primarily because of the way that it sounds rolling off the tongue. It should really be the title of a Rush album, right? As for the Jays' power, they've posted a .173 ISO so far, fifth-best in the AL. Along the way, they've crushed 81 home runs, second-most in the AL behind the Yankees, which might explain the discrepancy between what we'd expect that they'd produce and what has been hung up on the scoreboard. Although: 77 doubles, the second-least the AL.

What we also find surprising is the fact that the Jays - in spite of what seems like endless roster moves - have used just 16 position players to this point in the season, tied for the least in the AL. On one level, that makes us wonder if they've been a bit lucky with injuries thus far - get well soon Edwin! - but considering they've had to dispatch two hitters to Las Vegas to deal with their bat-stinkiness, it's not as though they've been without struggle and strife.

And beyond those who've already paid the price for their futility, there's probably no player in whom we've been more disappointed that Brett Lawrie. It surprises us that we'd get caught up in the tidal wave of high expectations for the Jays' fiery, athletic third baseman, especially when he remains the youngest position player on the team. Ultimately, an OPS around .800 (with, let's say, a .340/.460 split) to go with15 homers and 20 steals might be a really good season for a 22 year-old. Let's not lose sight of that.

If only he weren't such a blockhead on the basepaths sometimes.

The Pitchin': Roll all of the good and the bad in together, and we probably would have called the Blue Jays' pitching somewhat average. And if you look at their staff ERA, it sits at 4.06, just below the league average of 4.03.

Their xFIP (if that's your bag) is 4.22, which puts them towards the bottom of the AL in a pack with the Royals, Twins, Indians and A's. Not exactly august company. (Though we're not even smart enough to know if it makes a lick of sense to even look at xFIP in mid season. We're sure you'll set us straight.)

They're not exactly blowing their opponents out of the batters box, sitting fourth from the bottom in strikeouts with 393. Certainly, having Henderson Alvarez and his 2.63 K/9 rate dragging down the rest of the class doesn't help. Ultimately, the Jays' entire pitching staff has been worth a grand total of two wins above replacement (if you believe Fangraphs), ahead of only the lowly Twins.

Our biggest concern at this point with the pitching staff is the fact that there aren't a lot of young arms that seem ready to beat down the door and create a log jam of talent, which is what we expected to happen after spring training. We'll dig through the state of the minor leagues in the coming days, but suffice to say that no one in their system seems likely to push Kyle Drabek out of the rotation next year, nor does there seem to be a reasonable replacement for any of the other four starters if they go down.

The bullpen has been like a sack of mixed fruit cocktail: A little mushy, a little gross, and with only so many delicious simulated cherries to go around. The two lefties - Darren Oliver and Luis Perez - have been good to great for a big part of the season, though Perez has started to see his ERA climb with a couple of lousy outings against the Mets and Red Sox. As for the rest, Jason Frasor and Carlos Villanueva are walking too many batters (5.59/9 for Frasor, 5.90 for Los Del V), and the rest of the pen is a collection of spare parts. Meanwhile, Casey Janssen has filled in admirably at closer. Coco Cordero? Not so much, but let's not ponder that overly long.

Speaking of which: Do you remember how the Jays kept Sergio Santos hidden away from sight for most of the spring? Kinda makes you wonder whether if he was messed up even before he arrived, doesn't it?

That Kenny Williams. What a prankster.

The Fieldin': Perpetual extreme shifts are cool, eh?
Posted by Tao of Stieb at 1:39 PM

It should be noted that Cordero has improved dramatically over his first 11.2 innings.

The difference between the ERA and FIP probably tells you more about the success of defense, vs. the skills of the pitcher himself. Check FIP as often you would like, it tells you what the pitcher might expect his ERA to be if he were blessed (or cursed) with perfectly average defenders and luck on balls put into play.

Before the season, this was an 80-82 win team from Vegas oddsmakers. No major changes to the personnel (Lind and Thames do not offer much more or less than Gomes and Cooper), and it still looks like an 80-82 win team to me!

Anonymous - I didn't mention Edwin because I already wrote a piece on him for Sportsnet Magazine...It's a shame that you didn't read it!

CoolHead - Here's the thing about Vegas odds: They are mostly focused on getting an equal number of suckers on either side of the betting ledger. It has a lot more to do with perception than anything else.

The Jays are currently on pace for 87 wins, so yeah, they should be somewhere in the 84 - 87 territory. I think the two things that will define the rest of the season are the 3-4-5 guys in the rotation. Hutch has looked really good lately, but not so much for Drabek and Alvarez.

I'm sure the run support will be there, but you have to wonder how EE will respond after the injury.

Who knows a good streaming site for tomorrow's game? fucking shit's on sn1 again. site i usually use is pretty poor video quality.

The big disappointment for me has been the bullpen so far.

EE has been great, Joey bats is rounding into form and Rasmus is showing glimpses of what we traded for. Hopefully Snider can recover and come back for a second half.

I too worry that 2 of our big three starters in AA are Looking putrid and for Jenkins it's his second go round. Sadly should a starter go down, Cecil may be the only option.

We need to fix the pen. Perhaps that's where Stroman fits in?

i expect this team to be hot till september and in the wild card race till the last week.

what it really boils down to is how awesome our september call ups will be (not to mention d'arnaud kicking arencibia out of a starting job by start next year).

Why should Drabek get pushed out of the rotation before Alvarez? Genuine question, not rhetorical. Haven't looked up the stats, basic or advanced, just going by the eye-ball test Hendy seems the one who could use more seasoning. Or is he never going to miss more bats?

Hendy's statistical profile seems closest to Correia. It is similar to Lowe, except the glaring different in HR allowed.

Not enough major-league-ready pitching to step up when somebody tanks or lands on the DL... I think this is the Jays' biggest problem, and they have a few big ones - Bautista's rubber bat, an unreliable bullpen, Santos, etc. The big stories this season are Morrow and EE. Two games out... should be interesting up to the trade deadline.