Vernon Wells found something in the off-season 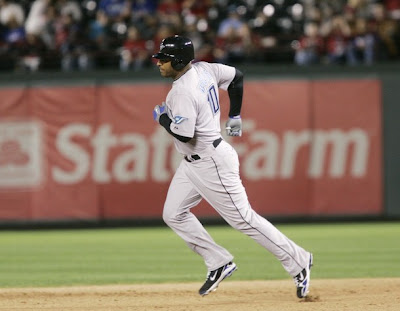 Whatever it is that he found or reclaimed, Wells seems to have improved remarkably in the batters box through his first nine plate appearances. His bat is quick through the hitting zone, the plane of his swing is level, and that path that his bat takes to the ball straight and direct.

Maybe it's our irrational happiness for the return of real baseball, but we started to have visions of the rest of Vernon's season, where he was a centrepiece of a surprising resurgence.

And then we had another thought, which was oddly unsettling. We thought about Vernon playing at a 30-homer 100-RBI pace when the centrefielder of a big money contender goes down, and they are in desperate need of a solid offensive and defensive replacement. Wouldn't we feel amazing if the Jays were able to unload the back end of that contract? And aren't we kinda rooting for VW to play himself out of Toronto.

And as for that whole Eric Smith thing
Sorry. We should know better that to rise to the mainstream media vs. bloggers bait. But Smith's high-and-mighty lecture on the relative value of journalism and ACCESS! just seemed so ludicrously smug and self-satisfied, and yet so poorly conceived, wretchedly executed and so rife with cliches that it would have been a shame to not tee off on it.

Smith has backpedaled on the piece a bit, letting us know that some of his best friends are bloggers, and that he didn't say "ALL" bloggers are bad, so no one should take offense.

Eric Smith is a respected journalist/broadcaster. Something of which you, sir, are neither!

i know that this is getting ahead of ourselves but suppose VW has a monster first half, gets voted into the All-Star game, and plays above average defense.

is there any chance anyone would take him? the Jays could even offer to pay his remaining 2010 salary. is there anything VW could do to make his untradeable contract tradeable?

A bit off topic (OK, totally off topic)...I was just reading a story on the Nats home opener and how many Phillies fans were there due to advance group sales that Phillies Nation took advantage of. Someone commented that the Jays have done this for years, courting Tiger, Yanks and Sox fans before opening sales to Jays fans. Is this true? I'm in southern California so I don't generally hear anything about stuff like this.

Jaysfan26, yeah, it is true. It caused quite an uproar around these here internets a couple of years back when the Jays announced that they were selling advanced tickets to Boston and Detroit fans before Jays fans were even able to buy tickets.

That was back when Paul Godfrey was in charge though, so I'm not sure if they're still pulling that shit -- hopefully not, but I guess they do have to put bums in the seats somehow.

Thanks Ty - anything for a buck I guess.

My other rant for the day is why in the hell DirecTV can't tell you which feed is the Jays or Rangers on the menu screen.

I'm sorry but I just can't listen to Josh Lewin who does the Rangers games.

Vernon's going nowhere. And will win the Triple Crown.

I can't see the Jays getting out of Wells' contract clean - no matter what other teams' needs might be, the $ is just too large for anyone to take on...but if the Jays offered to pay half (for example) of his remaining money, they might get something useful in return and save themselves $10MM a year or so...for now, I will simply enjoy the pleasant surprise of our highest paid player and clean-up hitter actually looking the part...

As for fans of the road team and ticket access, being associated with anything the Nationals do is particularly embarassing...but Rogers may even be worse, as they sold to BOS/NY/etc. fans BEFORE home fans got a shot...that is nothing short of an "f-you" from ownership...

Isn't this the tried and true "I just told a racist joke - and found out that the guy I just told said joke to has a sister dating a black guy" defense?

Vernon going for the triple crown this year
http://espn.go.com/mlb/statistics

Our boy could already be on track to bounce back.

Cheer for him for the good of the team and because he's a good guy? Or cheer for him because a much improved V is perhaps somehow tradeable?

Either way - just cheer for the guy, TO.

Why not keep him around if he ends up putting up the same numbers he did earlier in his career? I know its a lot of money, but if he produces again, why not keep a productive hitter in our line-up? It's not like we have a stud center fielder ready to step in his place. IMO, it's a win-win, if he is .300 30hr 110rbi for the next four years.

I still think there's something wrong in his head.

Bont, no way. Don't get trapped into that logic. He's 31 and if he somehow puts together a good season, you get rid of him the first chance you get.

Nice article Tao, but more importantly, what does your magic ball have to say about VW's season?

Hopefully this start to the season isn't a sci-fi story from HGH Wells.

Meh. that seemed funnier in my head

We shouldn't be surprised if VW puts up a big year - he's certainly done it before. We just shouldn't expect it. And the minute he becomes tradable by eatin $10m per year of his contract, we should do it.