Brett Cecil is coming to make everything better 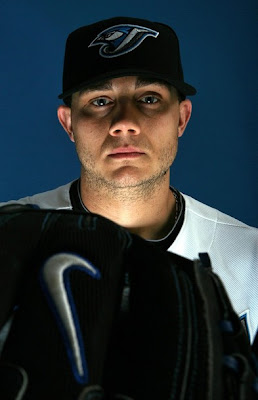 So that guy (what's-his-name, the number two starter, hipster oaf-looking fella) is off to the DL with a case of the Too-Many-Cutters. So for those of you who were waiting patiently throughout both weeks of the season for Brett Cecil to return, now is your moment.

We're so excited to have Cecil back with the big club that we have to admit to losing our composure upon hearing the news. It was almost as though we heard that David Cone, Jimmy Key and Mark Eichhorn jumped into a hot tub time machine, dialed it back to 1992 and were on their way to Toronto to reclaim glory.

(And, if you'll permit a bit of a meander here: Would '92 vintage Cone/Key/Eichhorn put the Jays back into contention? Would they have to Roberto Alomar along for the hot tubbing? And would they want to? Sorry...I got lost there for a moment.)

Why do we love Cecil so much? How is it that this young lefty with an ERA on the wrong side of 5.00 and a WHIP of 1.65 has captured our imagination? The best explanation that we have is that Cecil is the Bizarro World Shawn Camp for us. It doesn't matter how bad the result is, we can't help coming away from every outing feeling that much better about him.

We don't even mind that he gave up 13 hits in 11 innings at Las Vegas so far, or that his Triple-A WHIP is 1.36. We figure that has to be the fault of bad fielding. Or poor field conditions. Or official scorers with a vendetta.

When it comes right down to it, we're probably a bit fixated on Cecil's legs. They are as thick and strong as sequoias, and when he's on a roll, he uses them effectively to drop and drive towards the plate. The strength in his legs help him maintain a powerful and consistent delivery, and he never looks like he's overtaxing his arm, which makes us think that the chances of a DL stint based on throwing too many of a certain pitch is unlikely.

We realize that reading along as a grown man swoons for reasons that are wholly irrational might make some of you uncomfortable. Sorry about that. As a make good to all the fellas who might have found this a bit disconcerting. So as a make good, we offer the Christina Hendricks Esquire cover. Which you've already seen, we're sure...but too much of Christina Hendricks is never enough. 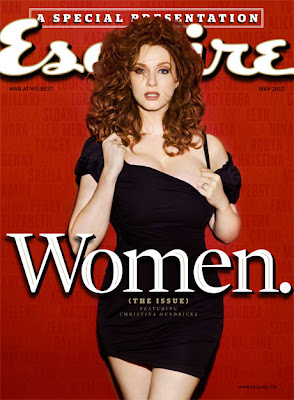 Not to be the "I read Esquire for the articles!" girl, but her piece was kinda strange. Also, no one wants to get in a hot tub with Robrto Alomar.

Or Roberto Alomar with an E, for that matter.

So, Tao, is Hendricks your perfect woman? If you were remaking Weird Science, would she get the Kelly LeBrock role?

This is funny -- and sort of related.

Tao, seems like you have a thing for redheads, yes?

It would also explain the love for Roy Halladay.

It's not so much a "thing" for redheads as much as it is an "illness beyond my control".

Which is why I married a blonde. Go figure.

Probably not my "perfect woman". I'm not sure that such a thing exists. But I'll spend the next few hours on Egotastic looking for her.

(Actually, Mrs. Tao is probably my perfect woman, based on the fact that she is one of the few who could put up with my hijinks. Barely.)

Well, yeah, I mean, of course.

I am specifically referring to physical attributes and, well, nevermind. This line of conversation will end nowhere good. Strange how many of my conversations end that way.

I'm not going to look at the article until I pick up the magazine...but Esquire has pretty much perfected the impenetrable celebrity profile at this point.

I have stacks and stacks of Esquires going back to 1992, and as I was reorganizing them recently, it occurred to me how seldom I buy the magazine now. It's gotten so smug and self-satisfied over the years that I can barely bring myself to read it.

The magazine used to be defined by writers like Bill Zehme and Gay Talese. Now, they have Stacey Grenrock Woods making jokes for herself and no one else. Depressing.

(Although that Roger Ebert article rocked.)

The Ebert article was unbelievable!! So great, I passed that one around to everyone I knew. Definitely the best thing they've done in a long time.

I'm excited about Brett Cecil because of the following:

YESS. Someone else reads, uhh looks at, Egotastic too. Now I don't feel like such a pervo.

And my favorite Esquire girl was Halle Berry. And she is THE perfect woman, there is no doubt about that.

I have heard it said that gentlemen prefer blondes, but marry brunettes and the other woman is always a redhead.

Maybe this box score will make you feel more at ease with Brett Cecil facing the Rays.

Or maybe he was trying to got for a "fear me" look.

everyone in the gay family know that redheaded hussy is not a she BUT is really a he! A friend of mine dated him when he was the most fabulous queen in South Beach. Then she hooked up with Arod and he bought him breastes(sic) and fabulous extensions.did I forget to mention that Chritopher(real name) is a pushy bottom as well.all you straights sloobering all over her it's quite comical. all of you mens losing your composure over a chick with a dick!

Cecil is cute BUT Brad Mills is a hunk. His stats are beefier than Cecil's among other things...They should have brought up Millsy to battle with those young hunk-o-mens down in Tampa. st Pete is so ungay friendly though. I brought a Queers For Longoria Banner and some Bush supporter took out their skin pistol and tried to intimdate me! Needless to say I converted him! Nuff said......

A great deal of effective information for me!