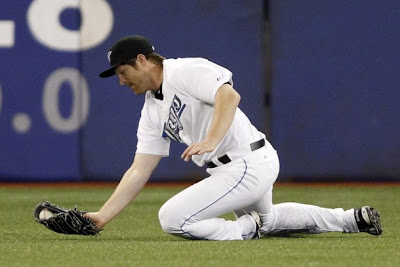 We'd prefer not to put too much more thought into last night's game. We're not even going to repeat the score or the details, because such a thing will only help the thought to take purchase in the soil of our mind. And so, we forget.

In lieu of any day after gnashing of teeth, we offer up 10 brief and random notions on the season thus far. We do this also because since we been on the Twitter, we can no longer shape or develop any cogent argument in a paragraph. We can only hint at the possibility of one in 140 characters.

(All hail Twitter: The End of Thought, The Triumph of Whims!)

1. We'd given up on Casey Janssen, but he now looks like he could throw a pitch past someone if he needed to.

2. Randy Ruiz is a big dude, but he can run the bases with fury if he needs to.

3. We like seeing Adam Lind in the field. It reminds us that he's going to play there when the Jays make it to the World Series.

4. Overbay complained in '09 about not getting regular playing time. We hope he's enjoying his 2010 so far. We're not. So far.

5. Kevin Gregg just looks like a closer. Like a big, jarheaded nasty shut-the-door closer. And that appeals to some part of us.

6. Frasor is about eight inches shorter than Gregg, but still throws harder. It just doesn't seem that way.

7. Ruiz has now scored more runs than Aaron Hill. And not in the good way we might have imagined before the season.

8. Hamstring injuries scare the shit out of us. We remember the first time Vernon pulled up lame with one.

9. A sign that this might be more than a hot start: In addition to his improved swing, Vernon is letting pitches off the plate go for balls.

Sometimes you get the bear, sometimes the bear gets you...

There is, as usual for this time of the year, WAY more positives than negatives so far with the Jays.

Roy is doing great too!

10,000 people show up last nite? It was more like 7000. will they draw less than a million this year? The answer is probably yes. Will that be a wake up call to The Rogers, Beeston and AA? i hope so because when and if this team competes no one will give a shit 4 years from now! They need to spend some money next year or else they will lose the fanbase.

I've been happy so far this season, but have been waiting for the other shoe to drop. I hope last night's laugher wasn't it. The proof will be in how they respond tonight. I didn't see much compete last night. You could look at Romero and know he was dominating. Danks didn't look as impressive, but gave up only one more hit. They were at home, but it felt like a run for the bus.

I'm waiting for keeping Lyle's spirits up to pay dividends. He's out the door, Snider might be the future. I would have played the kid and told Lyle to get some rest. But that's just me.

Brad Mills could look nice in the number 5 spot when we get sick of Eveland or Tallet.

The Jays' attendance is going to be down, but not that far down. They got 1.8 million last year, and they're down about 3000 per game on mid-week gates.

I'd figure 1.4 million would be about where they land, unless they compete.

Early April and late September games are a bad way to judge the interest in the team.

Wallace is playing first in LV.

HEY HEY REMEMBER ME? YOU TRADED ME FOR THAT PIECE OF SHIT MORROW! AND YOU GAVE AWAY LEAGUE TO BOOT? YOU FUCKING GRINGOS. WTF.

"We do this also because since we been on the Twitter, we can shape of develop any cogent argument in a paragraph."

I am in HIGH DESERT! I LOVE IT HERE..way more spanish speakers than in Lansing.....and if you dont really believe i am who i say i am....i have four methods to prove I am him..

Mr. Chavez, you could presumably have four methods to prove you are really who you say you are and those methods could be unknowable to anyone who couldn't possibly be you, but how would we then verify them?

Maybe if you have some distinguishing features on your genitals or rectum, the Gay Jays Fan could vouch for you, but other than that, who knows?

In any case, glad you're happy to be where you are. You deserve that much. But we lost Halladay in a trade over the winter; how much time do you think we spent mourning your departure? I mean, really?

Of Morrow: "He didn't pitch a lot. He's still kind of having his Spring Training right now," said the manager.

Um...hello, isn't this exactly why they have something called "extended Spring Training"? WTF.

What happened to that snake tattoo on Scott Downs' neck? #JaysTalkinsidejoke

Did Brad Mills do anything in Spring Training that would show a big time jump? What are they feeding the guy for breakfast to produce numbers like that?
Or, are these home starts and the opposition are still hung-over from visiting LV?

@ Holden Ballsfield, honey you called..... queer I am! HAHa! Yes that's JC , he's so well hung...like an Arizona Diamondback actually!Latin guys are fun . They pretend they're straight and then play the role of pushy bottom for mucho time. JC was my best lover next to Liberace and Rock Hudson BTW. He's not as cute as Teddy Bear Tallet BUT he has that charm that Cito has. anyway, it's him, I can taste him through the computer!