Roy Halladay is going to break your heart 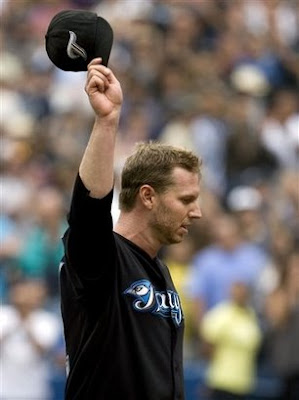 One the one hand, it was incredibly bittersweet to watch Roy Halladay pitch his brains out in a vintage six-hit, one-run complete game over Red Sox in front of a large partisan crowd on Sunday.

On the other hand, it was completely demoralizing to hear Brandy Halladay on the radio twice over the weekend, getting choked up and ostensibly saying her goodbyes to Toronto. Any vague notion that we had that there might be a chance to hold on to Doc this year and re-sign him to an extension or whatever was pretty much blown away in those two brief impromptu interviews with the radio crew.

Let's face it: If the woman who knows Doc better than anyone has it in her mind that this weekend represented her last food drive with the Lady Jays, and that this weekend might be his last homestand, then those faint hopes of holding onto the greatest pitcher in Jays history just got a little more remote.

Hang on tightly. Let go lightly.
Posted by Tao of Stieb at 8:09 AM

Here's hoping I'll be headed down to the Dome on Friday for Doc's next start. Fuck.

It's not normal to feel like this. It can't be.

I will be living my this motto up until the July 31st trade deadline. Don't go, Doc!

Actually, we've already plotted our escape from the Fortress of Solitude to head down to the park for this weekend's series.

And if Doc is traded before Friday, then I'd better freaking well see Matt Kemp and Clayton Kershaw in powder blues that night.

I'm heading to Toronto for the Labour Day weekend series against some jerks from New York. I'm afraid I'll be hoping for starts from double-R and Zep rather than the Doc.

I hate that today is an off day. Seems like the time a club would announce a major deal. I'm going to get no work done today.

You almost wish a trade would have come out of nowhere.

I really hate seeing this Roy Halladay Goodbye Tour and with all these rumours swirling, any trade is going to feel underwhelming in terms of what the Jays get back.

Did it ever not occur to you that Brandy's going through the same thing we're going through? That she's planning for the worst while hoping for the best? I think you're reading too much into her reaction.

And yes, I do feel the irony of that last statement.

one can only hope

I confess that I've considered that Brandy may well be going through the same thing we Blue Jays fans are.

But what I read into her comments was a sense that even if the trade doesn't happen now or in the winter, the Halladays have spoken at length about where Roy will be employed in the future, and it isn't likely to be Toronto.

Barring some sort of miraculous turnaround from the team in the next year, I get the sense that Doc is convinced that the time is now for him to go to a contender and take a shot at a ring. And I can't really blame him for thinking that way at all.

It really is quite amazing how people (including me) feel about Halladay leaving. I really can't think of a comparison.

Those pale in comparison to how bizarrely upset I feel about the prospect of losing Halladay.

I doubt we're getting Kershaw and Kemp back. How about that J.A. Happ? Let's get happy people!

Wow, that was my best unintended pun ever! I wish I had intended it.

For what it's worth Priesty, I thought it was intended, and will continue to operate under that assumption.

It was a freudian pun

JP's right. Halladick is finished. Might as well trade him to the Nationals so he can play with Dunnce

Oh, and I forgot to add that Hill (or Hole as I like to call him) is also finished. He's got nowhere to go but down. Also Lind. That guy just plain old sucks.

I guess things must be quiet over in the comments at the Drunk Jays Fans if we're getting this level of witty repartee over here.

Don't worry, Tao. You're clever in your own way

I'm going to miss him! Don't leave Doc! ...Scutaro will have to become my new favourite.

It's bad form to shit on your own commenters.

It's bad form to comment on your own shit.

In Soviet Russia, blog comments on you!

Clayton Kershaw & Matt Kemp! thats exactly what i hoped for... good call Steib.. im with you on that one