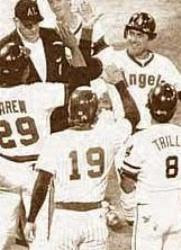 One of our most vivid baseball memories is of Fred Lynn hitting a grand slam off Atlee Hammaker in the 1983 All-Star Game. When we close our eyes, we can still see that ball sailing into the seats in old Comiskey Park, all of these 26 years later.

Which brings us to this: If you don't like the All-Star Game, then I suggest you go find a dark hole into which you can crawl for the next two days and shut the fuck up about it. (This includes you, freeloading mainstream media fatheaded pigboy catering-vacuuming ingrates. Shut it.) It drives us beyond batty every year to hear people - especially those who get paid to watch these games - whine and moan about all of the game's shortcomings.

Seriously, nobody's making anybody watch the game if they don't want to, so feel free to find somewhere else to direct your misery if the notion of an exhibition game of the best players in the game somehow offends your sensibilities.

We don't particularly care if the game doesn't "mean anything", nor do we care that it means too much because of the home field advantage that's bestowed to the winning league. We're not bent out of shape that some guys didn't make the team, and we don't care that the rosters are absurdly big to include all the teams representatives. We don't care that this might not be the best 60-odd players in the Majors battling for supremacy.

The All-Star game is a fun diversion in the middle of a long season. Frankly, we think that people have tried so hard to beat the fun out of baseball that they forget the fact that the game itself is a much-needed diversion.

couldn't have said it much better myself

Is it wrong to hope that Roy goes back on the DL until the 1st week of August to quell the trade talk for a while?

Great stuff, couldn't agree more. Those same fatheads don't like the WBC.....the only other event that promotes the game globally.

For a second it makes you believe that these guys still enjoy the game rather than their job.

Leroy whut! Though, i think those same idiots are trying to ruin it for us with the non-stop Doc trade talk. Or err that memory I'm trying to repress.

I will take great pride in watching Roy Halladay start the game for the AL, representing the Toronto Blue Jays.

I'm with you, eyebleaf. It's a huge thrill that my two favourite Jays, Roy and Aaron, are starting the game, and that my third-favourite, Adam, was among the finalists to be voted in. Great day in Jays land - and we sure need it.

We need another classic All-Star game moment to happen, like Randy Johnson throwing one past John Kruk. It's way too serious now.

And Atlee Hammaker was never the same pitcher after that game. Straight into the toilet.

Stedron, you think all that wisdom comes with youth? Tao is sage.

And he has this condition where his big toe never stops growing. He looks like an R. Crumb sketch except he's deadly and hates the poor.

Evidently the good people at Rogers aren't big fans of the game. Scrolling through the Sportsnet ticker right now:

"American League wins All Star game for first time since 1996."

I guess it's not like baseball is their business or anything.

Game was just OK - maybe it just seemed that way cause last years was so good. No real tense moments with the exception of Howard's AB in the 8th. Also, no real standout MVP. If you're going to give it to Carl, you might as well give it to Rivera.

Also, Maddon is a coward. Where was Wakefield? What was the point of wasting a roster spot on a pitcher who you're not going to bring into the game because you're afraid no one can catch his knuckler. Why not bring him in for an inning in the 3rd. IAlso, it sure seemed like there was a lot of Rays there too...

@ DP absolutely golden! R Crumb eh? Now that is a rare pop culture reference these days. Who could forget Fritz the Cat,mate?

I feel like this post was directed at Mike Wilner, and you are right. People who hate on the ASG probably hate boobies too.