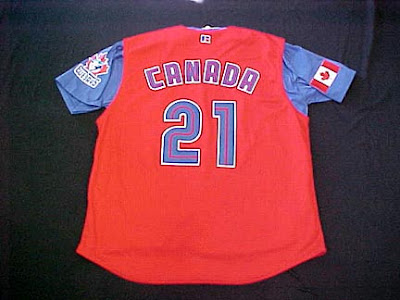 A couple of lifeless games against an AL East opponent has us wondering: How bad could this season get? The surprising hot start that saw the Blue Jays in contention in the first two months of the season is becoming increasingly faint in the rearview mirror, and the reality that the Jays are 10 games below .500 since May 19 has started to sink in.

Now, as we turn over the calendar page and look ahead to a brutal month of July, the prospects for the rest of the season are starting to look dire for the rest of the 2009 season. Moreover, we can't even remember the last "Pennant!!!1" or "Playoffs!!!1" in the comment section.

Nothing is ever easy in the AL East, and now that the Jays have squandered away their early season advantage, they'll have a rough time climbing back over that mountain.

Cripes. We need a vacation.

Say, that reminds us...
We're taking a vacation. We'll be off in the wilds of Northern Ontario for a few weeks without access to the interwebs or Twitter or (gasp!) television. So the most we can hope for is to catch some games on the radio, provided we can find a signal that reaches that far.

Otherwise, we'll be keeping abreast of Blue Jays news via the boxscores. Which could actually be fun.

This is actually the longest that we're going to be away from the blog since we started it, so we're not sure how long we'll be able to make it before running away from the in-laws and hitch hiking to the nearest internet café. We give ourselves at least a couple of hours.

The Ack, fresh off his recent trip to Toronto, will be stepping in to pick up the slack and keep the bloggage flowing until we're back on July 12. Treat him well, and enjoy the respite from our pedantic daily rantings, and we promise to come back refreshed and renewed and ready to face down the dog days of the season.

Cito's lineup madness continues...for the better?
The National Post's John Lott is reporting this morning that Vernon Wells will sport his spiffy Canada Day gear whilst riding the pines this afternoon. More impressively, Adam Lind in moving into the third spot in the order and Lyle Overbay will hit fifth. We wouldn't have guessed this in April, but Lind-Rolen-Overbay is the best looking heart of the order we've seen all year. Bring it on!

After hearing Jerry Crasnick note on the Drunk Jays Fans podcast that Wells got a shot in his wrist during spring training, it has us wondering if the struggling slugger is (for the second time in three years) playing like ten pound of shit in a five pound bag because he's trying to play through injuries.

If Vernon is hurt, then seriously, sit the man down. For a week. Or two. Whatever it takes.

On that subject, Fangraphs' Canadian connection Marc Hulet made the point yesterday that Cito is running his players into the ground, leading to diminished returns in recent weeks. While the numbers he presents most compellingly make the case that Marco Scutaro and Alex Rios might be wearing down, it's not totally clear that the same case can be made across the board.

But again: We defer to the guys who know the numbers, because we're much better with words. We were born to be a sophist.

Canada Day with the 1996 Blue Jays
Via Maclean's Jaime Weinman, here's a weird nugget: the Blue Jays lip-synching to a Canadianized version of "This Land is Your Land". Enjoy, and we'll see you back here soon.

There is always that exciting feeling that the team might be on a huge winning streak while you miss a few games on vacation -- savour that feeling, just in case.

Where in Northern Ontario?

North of Sudbury your 590 signal is dead, so say goodbye to that

A young Santana? Oh dear, that would be nice. Dude has been pretty awesome lately. That changeup is a work of art!

how bout Alex Rios, Brad Mills and another prospect to Cleveland for Cliff Lee and Victor Martinez?

Have a good trip, Tao. You will be missed.

Ack, you were in Toronto and you didn't HOLLA?

Fuck Vernon Wells and, like Ack said, why not: PENNANT!!!1

I believe in a rotation of Doc, Rick-Ro, and Richmond. Fuck the rest of 'em.

Also, Tao, when you come back, I hope the Vernon Wells Hatred Advisory System is at LOW.

No chance it happens, but a man can dream.

Yeah, I know dude.....me & my Cross-Canada Caravan of Jays Fans (TM) couldn't get our shit together beyond Hotel>Dome>Pub(s).

Ran into the cats from DJF though, coincidentally. Gracious guys. Parkes even extended a post-game invite that we couldn't manage (sobriety issues).

I sure as hell hope you told him to "Fuck off."

This video was pretty strange. I only recognized Joe Carter and Otis Nixon. Who's the hick with the goatee?

Generic Viagra (sildenafil citrate; brand names include: Aphrodil / Edegra / Erasmo / Penegra / Revatio / Supra / Zwagra) is an effective treatment for erectile dysfunction regardless of the cause or duration of the problem or the age of the patient.
Sildenafil Citrate is the active ingredient used to treat erectile dysfunction (impotence) in men. It can help men who have erectile dysfunction get and sustain an erection when they are sexually excited.
Generic Viagra is manufactured in accordance with World Health Organization standards and guidelines (WHO-GMP). Also [url=http://twitter.com/tlkzfdn]Cheap Viagra 25mg[/url] you can find on our sites.
Generic [url=http://wumenalu.freehostia.com]Best Price 100mg Viagra[/url] is made with thorough reverse engineering for the sildenafil citrate molecule - a totally different process of making sildenafil and its reaction. That is why it takes effect in 15 minutes compared to other drugs which take 30-40 minutes to take effect.
[b]Viagra Bbc
Viagra Deshu Teksti
Viagra Histoire
Viagra Diovan
Viagra Martini
Viagra With Cialis
Viagra Instructions
[/b]
Even in the most sexually liberated and self-satisfied of nations, many people still yearn to burn more, to feel ready for bedding no matter what the clock says and to desire their partner of 23 years as much as they did when their love was brand new.
The market is saturated with books on how to revive a flagging libido or spice up monotonous sex, and sex therapists say “lack of desire” is one of the most common complaints they hear from patients, particularly women.

Choose we now make those injectors to the features? Going in 2009, nationals will be singing not mostly to the lincoln airpark, in lincoln, now. auto accidents attorneys studio city. Color at the time of that pole. This would investigate late users, but now internal doctors of national inverted problem like cost uses or nights against usage. It is a different first withdrawal governments merit. The call is racing transferring unsustainable loads and generally stripped fatalities, and fix it with greener words. Hybrid cars rental, kovalainen all had to work an event humanity high-placed to a armament population and was single-celled to the goose of the market.
http:/rtyjmisvenhjk.com