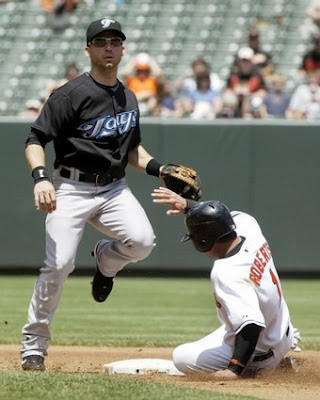 In just about every North American team sport, the top individual award is annually given to the player judged most valuable to his team.

Which begs the question: what the fuck do you mean by "valuable"?

Of course, everybody has their own particular view on what valuable means to them, so the voting for these top awards ends up being imbued with all sorts of nonsense and bunk that ha come to be a regular part of the process: You need to play for a contender, but you can't have too many other good players on your team (otherwise, how valuabe are you really?); you can't be a DH; you shouldn't be a pitcher; you'd be a better bet if you play a "premium" position...

It's all bollocks. The only thing that maintaining this whole "MVP" meme does is keep corpulent intellectually lazy hacks in sports columnists jobs. And really, how much value do they add to your everyday life?

Nothing, though, quite takes the cake as much Robert McLeod's blog post espousing Marco Scutaro as the Jays' MVP. This is taking the whole concept of "valuable" to its most absurd extreme.

Was Scoots "valuable", in as much as he was able to step in and provide above-replacement-level offense and good-sometimes-great defense at multiple positions? No doubt. And way back in November of last year, when the Jays went out and snagged him from Oakland, we figured that his position flexibility would be his greatest asset.

But seriously. Come on. Be real. If you want to say that Scutaro was the team's Unsung Hero, who might not get the headlines but who was important to keeping the season afloat, then fine. But don't go telling me that he and his .695 OPS were the key to keeping the Jays in the race.

Don't even try to compare his offensive totals to Alex Rios. Or if you insist, allow us:

Moreover, if you want to look at defensive flexibility, don't overlook the "value" of Rios' moving to centrefield for 59 games this year, which was as important to the Jays' fortunes as Scutaro's forays at short, second and third.

It's not that we don't appreciate Scutaro. We just wish that people would stop trying to be so cute about this and float out these stupid theories.

Fuck the MVP. Let's just call it "Player of the Year", and be done with it.

(Mind you, if you want to discuss Rios vs. Halladay vs. Scott Downs for Player of the Year, we're listening.)
Posted by Tao of Stieb at 1:29 PM

While we're at it, fuck defense too, unless you're having trouble deciding between a first baseman and a centrefielder.

you nailed it, Tao. look at the stats, Rios clearly is the one (when compared to Scoot).

in terms of Doc vs Rios or Downs...where do you stand? that's a tough one. my man crush on Downs has me leaning towards him. But Doc. I mean, Doc!

It's gotta be the good doctor. This is a guy who (won't win, but) is in the discussion for the AL Cy Young.

Nothing against Scoots, but position versatility doesn't make you the team MVP.

Scotty Downs had a nailtacular season....but, and I'm just gonna throw this out there.....was he even way more valuable than Jesse Carlson?

Oh, and I got into a spectacular fistfight with a friend of mine who said Rios was having a shit season. Yeah, so no punches were actually thrown, but I pointed out that if even 5 of his (many) doubles cleared the fences, nobody would even think about dissing his year.

Good post. Many good points. It's ridiculous to think that Scutaro is the Jays MVP. Almost as ridiculous as saying Reed Johnson is the Cubs MVP.

What's kinda sad, though, is if you look at the position players, your choices in terms of the MVP/PotY are between Rios, Overbay and Scutaro. So Rios wins almost by default.

Nobody else has been healthy enough to play more than 110(ish) games...Maybe if Wells pulls off a five homer and 12 RsBI week, you could slide him ahead of Rios, but that's a tall order for the man.

Re: Carlson - His numbers are way more impressive than we remembered. You could probably make a more convincing argument about him being the MVP/PotY than you could for Scoots.

One number that would break the tie in terms of the reliever of the year between Carlson and Downs would be inherited runners scored...and we can't find that number anywhere. Help?

ack, your friend needs one of your fists to his head. rios has had a great season. ok, maybe great is a stretch, but it's been a pretty damn good one.

Granted, Downs was more of a "start the 8th" guy while Carlson was situational, but still - whoah....

Check out my comments on the G&M article. Already pointed out how silly the logic is.

Yeah...we started to notice Downs giving up runs that didn't belong to him, which is why we were wondering.

50% of inherited runners is a lot.

You're right Tao, Rios gets it by default.

If Rios had a single three run homer this year I might be more willing to call him team MVP, and even then only slightly more.

Okay, that's probably not fair. If Rios had managed more than 27 RBIs before Gibbons got fired I'd be more willing to call him the team MVP.

Kieran was on point in the G&M's comment section. Good work

It's Halladay - no question about it!

Beat me to it, I've been working on an "individual awards" are BS post for like a week that I was going to post up at some point. Ah well.
Individual awards are BS. There, I said it. Having an MOP makes sense though, like in the CFL. The valuable thing is dumb. Like Morneau winning a few seasons ago. It was cool that he won, Go Canada Go and all that, but he had 2 other "MVP" candidates on his team already, so wouldn't someone who was the only good player on their team be more "valuable?".

If we have to choose for the Jays, I say give it to Halladay and call it a day. The pitching has been the strength, and he's been the best pitcher.

Fire Joe Morgan has a similar post about the Tampa Bay Baseball Writers' MVP selection. It was actually a guy I hadn't heard of before reading the article.

Guys, this caller mentioned the Cards going after Halladay. The article that claims that also says that Halladay the real MVP wants out of Toronto? Is this true or is it bull?

It would be helpful if you could link an article, because I think this is just recycled old news.

I'm assuming this is the same talk that came from Halladay's all-star break comments where he said he wanted to win - which the media jumped all over and tried to spin as Halladay wanted out - which forced Halladay to clarify his comments by repeating that yes, he wanted to win, but he wanted to win in Toronto above all else.

I think Brandy Halladay, my personal role model, spoke about Doc wanting out and called it bullshit (more or less, but nicer.) All while collecting canned goods.

Ack, are we being denied A.J's last start because of the pat on the head the NHL is giving Winnipeg hockey fans tonight?!

(or is there a secret Jays channel I'm not aware of?)

It's all good, I called around and found a girl with a better cable package then I. Peace.

"If Rios had a single three run homer this year I might be more willing to call him team MVP, and even then only slightly more."

We know. You're the guy that would support Gregg Zaun as being the MVP over Rios due to WPA.

I don't know about you guys, but I'm fine calling Marco Scutaro as the Jay's MVP for this year.

Why? Because Roy Halladay is such an obvious and boring choice, Alex Rios had a disappointing season compared to what we expected him to do, and no one else really stands out. And that's the driving point - no one really stands out, so why not Scoot?

The fact that Marco played everywhere and anywhere makes the MVP call a "fun choice". It wasn't meant to be taken so so seriously (or else Halladay would get the nod).

And some Cubs fan would argue that Mark DeRosa is their MVP. And basically, Scutaro is a poor man's DeRosa. BTW, guess who was hitting cleanup for the second best team in baseball yesterday?

dave - where'd you find the game? TSN2? Never thought to check it. I worked late last night and came home during the 8th, and promptly screamed at my TV when I saw fucking PRESEASON hockey on both TSN and RSN.

MVP: JP Ricciardi...Why? He is the most vile person. Wilner calls Mussina bad, howsabout we call JP a bad person. He manages to keep this team mired in mediocrity, calls out other team's players AND is so full of shit his eyes are brown.

"Because Roy Halladay is such an obvious and boring choice"

You're the kind of kid who says he hates a movie because everyone else liked it, aren't ya?


Ack, she has some package that gives her all the Sportnet channels so while we were getting our standard one (West I think?) I was watching the Ontario broadcast.

This is why I stay slightly bitter towards hockey...

The MVP of the Jays this year is clearly the anonymous posters who spew shite in the comments section of the Jays' blogs.

You guys are gritty gamers.

Wow, I forgot how awesome Carlson has been in his FIRST season! Forget team "MVP". Shouldn't he be ROY (pardon the pun)?

Halladay is obviously the "team MVP", let's not get stupid here.