All is Right in the World 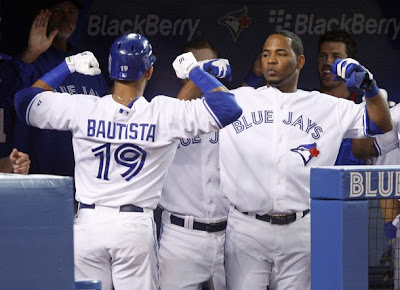 After an evening where José Bautista, Adam Lind and Brett Lawrie all homered, Ricky Romero had a strong-ish outing and Sergio Santos dusted off the Rays in just three batters, we reasonably certain that there's nothing left to complain about.

We're not going to spend the rest of this post castigating you like your scolding aunt for having freaked out in the first two weeks of the season over players' tepid performances. It's irrational to do so, but it's probably doubly irrational to expect fans to sit through 500 hours of baseball before they begin jumping to conclusions.

Part of the fun of the early part of the schedule is that you can't help but read too much into every at bat, relief outing or whatever. We waited all winter for this, and it was as painful an offseason as we can remember, so forgive us if we occasionally lose perspective, and we'll do the same. There's some sort of balance to be struck between making bold and angry proclamations after an ultimately insignificant event, and having the disdainful detachment that assumes that nothing matters until some undefined day far down the road.

(Does this sound like a post that's about 68% more crabby than it should be after a win over a divisional rival? We're not sure what got into us. Those off days really mess with our chemistry.)

Ultimately, we're still trying to wrap our head around this team without getting lost in hyperbole. We don't think that we've seen them at their best yet - especially offensively - but they've shown that they have enough depth in the lineup and rotation that they can pull out wins even on days where much doesn't go right. Plus, we still have a sense that the offense has another gear, and that when it starts to roll, it's going to be something to behold.

Then again, don't they say that in baseball, momentum is defined by the next day's pitcher? David Price has held the Jays to a 2.06 ERA over 12 career starts. Yikes.

Happy Anniversary to "We": Leave it to a dude to forget his anniversary. For some reason, we thought that April 18th marked the five-year anniversary of the old blogeroo, but apparently, it was the 16th. Oops.

We won't bore you to death with our self-congratulations or any sort of awards ceremony speech to recognize everyone who had a hand in keeping the blog going. We generally bore our friends' eyelids shut with our ponderous discourses on the blogging process and the meaning of it all, but we'll try not embarrass ourselves today. We would just like to say a quick word of thanks to you all.

To all of you who have read the blog, shared it, linked to it, contributed to it, commented on it, and generally indulged us over these past five years: Thank you. We hope you've enjoyed it, and we'll try to be better.
Posted by Tao of Stieb at 11:25 AM

I think between opening day and the Boston series, we have in fact had over 500 hours of baseball. Not complaining...just saying. Those were some long-ass games.

No Tao, thank you. Love that you keep putting this out here.

It's going to be a year of ups and downs. Everyone except Jose and Ricky are to greater or lesser extent finding themselves. Most of them, maybe even all of them, will find their level, and almost all of their levels are very, very good. Just not everyone at the same time this year, or not everyone at the same time for very long. That would be too much to expect, this year. But that doesn't mean they won't be fun to watch. What i have faith in is the pleasure we will have this year as the bugs are worked out and the confidence grows. We just have to keep our expectations in check.

Congrats on five years. Its an impressive feat.