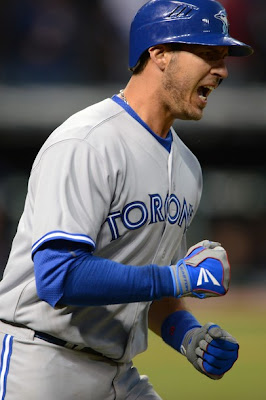 For a guy who was that close to posting an 0-for-7 last night, it sure ended up being a heck of a game for J.P. Arencibia. Crushing a game-winning homer over the tall wall at Progressive Field was unquestionably the highlight, but even if JPA hadn't done so, you'd still have to tip your cap to him on an impressive game. Aside from the big fly, we give Arencibia a lot of credit for his work behind the plate last night.

You could ask Shin Soo Choo about it, given the diving tag that J.P. made on his spikes to end the third, followed by the low throw on the first base side of second that caught Choo stealing to end the sixth.

And when a Luis Perez pitch buzzed Choo in the 15th, Arencibia got between the disgruntled hitter and the pitcher quickly enough to help defuse the situation. It looked to us as though Perez was ready to throw down, too. But the Jays needed his arm on the mound, because who the heck knows how long that game was going to go.

Finally, it bears noting that after a four-run outburst in the second, Arencibia spent a lot of time talking Ricky Romero through his last three innings of work, and helped guide him and seven more pitchers -- yes, the entirety of the Blue Jays bullpen -- through a total of 14 straight scoreless innings. All in a long day's work.

A few other impressions: It was a long day at the plate for Colby Rasmus, though he did hit the ball hard a few times for outs. Hopefully, that diving catch (which might have been a game changer in retrospect) is what sticks in the minds of most fans...Edwin Encarnacion crushed that ball in what turned out to be a game-tying double. We can't really hate on him for admiring his shot and his bat flip, nor getting caught off base on a sharp grounder in that same inning...Speaking of admiration of one's work, what was Rajai Davis doing watching that ugly bunt? We shouldn't need to reiterate our feelings on small ball to you all, but suffice to say, it sucks...It also looks like it might be a long few months in the field for Eric Thames. For all of the talk about his improvement in the field, he did not look sharp at all yesterday...José Bautista at first base? The late inning shift foreshadows a move that we suspect he'll make in the next few years.
Posted by Tao of Stieb at 11:11 AM

Not to be accused of being a Colby Rasmus apologist, but I recall he squared up a couple balls off Masterson, being one of the few Jays to actualy drive the ball in the air. Just got BABIP'd.

I'd say the guy who had the worst day at the plate was Brett Lawrie. I don't think he hit anything as hard as Rasmus did.

Besides Bautista, everyone was just free swinging a la Kirby Puckett.

Escobar may have looked the worst...

If this is what we have to look forward to from Thames in the field, I think a lot of people are going to be calling for Snider to replace him! Thames looked pretty awful in the field yesterday

It was far from a masterpiece, what with the numerous brain farts already mentioned, but hats off to the bullpen, 1 thru' 7, for a real ballsy effort. It was a sweet first victory, a new MLB record, and Farrell made some very proactive and most un-Cito-like moves that paid off big time.

Nothing wrong with small ball if executed correctly. As for Lawrie, the book is circulating on him.