It's Best to Look Away 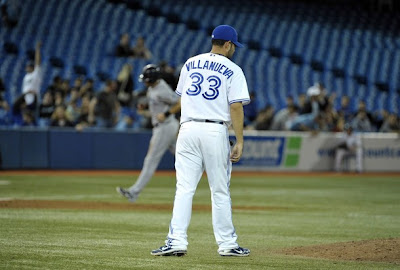 We're torn between the temptation to walk away from last night's ugly 12-2 loss and call it "just one of those games", or conversely, to pick through the wreckage and make a big deal out of everything. Being the notorious fence-sitting people-pleaser that we are, we'll probably do a bit of both.

Come along as we tread lightly.

OMG! What's Wrong With Morrow?: Slow your roll, there, Hoss. It was one bad outing against a team that's got a pretty decent lineup. And shall we remind you that Morrow had two starts to begin the season that were really quite good? Morrow looked as though he was having trouble getting the ball to do what he wanted, and his delivery was askew. Tack on a strikezone that was erratic at best and it adds up to a lousy outing that isn't necessarily indicative of anything. At least, not yet.

The Dubious Benefits of an Eight-Man Pen: We're still trying to figure out why the Jays need as many pitchers on their active roster as they carry, especially given the fact that such a scenario results in Carlos Villanueva playing the role of Jamie Vermilyea, rotting away for 10 days between appearances. Los Del V looked as though he was only vaguely familiar with the concept of pitching last night, and had no feel for getting his breaking ball over the plate and out of the dirt. But what could you expect?

And now we're seriously supposed to be intrigued by the notion that the Jays are going to bring another arm up any day now to pitch on Saturday? What happens to Jesse Chavez - and make no mistake, it will be Chavez - after he's done the one start? Does he park his butt in the bullpen and stare off into the stars, waiting weeks for his next opportunity to get the ball? Maybe he and Villanueva can play catch and reminisce about the good old days when they were big league ball players.

And in case you're interested, Darren Oliver is currently on five days of rest, Casey Janssen has had four days and Evan Crawford has had three days to ponder his 13-pitch outing.

It's probably true that the Jays don't have a whole slew of hitters who are banging down the door to come and get at bats in the big leagues. What are they going to do with a useful roster spot: Plug Mike McCoy into it? Bring up Travis Snider to let him sit on the bench and clean up around JPA and Lawrie's bachelor pad?

Let's Change the Subject: Last week's Tweet Bag brought us a number of great questions that were good enough to merit a more thoughtful answer, but that we didn't have the time to ponder in the moment. One of those @danemcburnie, who asked: If you had to pick someone to have a repeat of their best year, who would be the best choice: Rasmus, Johnson or Lind?

If you choose Johnson to repeat his 5.9 WAR season of 2010 (26 homers, .865 OPS), do you not also have to admit that such a season inevitably ends up with him playing elsewhere? Either by the trade deadline or in free agency? And is that such a bad thing? It could be that he'd become a very tempting asset this season, and might bring back several decent prospects in return if this is his level of competence.

Or would you choose Lind to repeat his Silver Slugger season of 2009 (.932 OPS, 35 homers, 35.7 weighted runs above average)? That sort of production in the middle of the Jays order might be the biggest contributor to the team's offensive success this season. Wouldn't this be the best bang for our buck? Aren't those the sort of numbers that you'd expect from your first baseman?

Or would we want to see the all-around performance of Colby Rasmus at his 2010 levels, when he posted a 4.3 WAR (.361 OBP, .498 SLG, 23 homers and 12 steals)? For a player at a premium position who is young and still has some projectibility, this would be a great output for this season, and would augur well for the future, wouldn't it? Also, wouldn't it just be nice to see Colby have that sort of year to hush some of his critics?

We could make the argument for any of the three. We think that the most beneficial to the Jays' chances of winning now would be Lind, while the most beneficial for the long term might be Johnson, and the season we'd most enjoy watching would be a great year for Rasmus.

If we remove our own fandom out of the equation, the answer probably comes down to Johnson versus Lind. We'd lean towards Lind, if only because the notion that Johnson might be racking up some of those numbers in another team's uniform seems a bit less appetizing to us.
Posted by Tao of Stieb at 12:11 PM

Agree; it's best just to chalk it up to one of those nights. Nothing went particularly well.

It's a 162 game season, and these games are just out there, to be survived just like the potholes your car will invariably hit during winter driving.

First of all, that Sportsnet special on JPA, Lawrie, and house mom Snider was hilarious.

Secondly, Drew Hutchison is slated to pitch Saturday. Why were you so sure it was Chavez?