Blue Monday - Five Things We Vaguely Recall from the Weekend 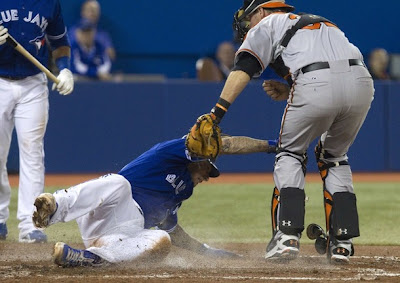 Blue Monday, oh, it's Blue Monday. Got to work, would rather sleep all day...But since that's not an option, here's a few top-line impressions from the weekend.

This weekend's series against the Orioles should be a bit of a wake-up call to those who figured that the 18 games against the Baltimore boys would be an easy walk-over all year long. The Orioles might have their flaws, and those organizational flaws might be ongoing and systemic. But when you see them on the field, they have the tools to knock the ball around and put runs on the board in a hurry. There are weaknesses in their rotation, bullpen and on defense, but we won't be quick to underestimate Nolan Reimold or Chris Davis again.

Full Tilt Lunacy: Somewhere among all the splendid attributes displayed by Brett Lawrie is a profound confidence in his abilities that is etched into his psyche like the ink is etched into every available spot on his epidermis. So it shouldn't have surprised us to see him take off for home with the bases loaded and José Bautista at the plate on Saturday afternoon. You halfway expected him to pull off his jersey as he took off to display a giant "YOLO" scrawled across his chest. It's hard to imagine Lawrie feeling as though he couldn't make it.

Lawrie then went on to compound the issue by making another out on the bases, getting gunned down by the strong arm or Matt Wieters. In the moment, we wondered if what sort of reception would be given to Colby Rasmus or Edwin Encarnacion or Eric Thames if they were to make two spectacular, inning-ending outs on the basepaths. We highly doubt it would be generous, but when it comes to our demonstrative countryman, there are many who we heard making the case for how those plays were positives. Can't knock the hustle? We beg to differ.

It's fair to remember that for all of the things that Lawrie does very well, he's still young and we're going to be witness to his maturation process over the next few years. Rookie mistakes? He'll make a few, for sure. We just hope that he learns from them.

Edwin Smiles Are the Best: There were weeks on end last season when Edwin Encarnacion would seemingly always wear a sad face with far-away eyes. Like he was miserable, lost, and waiting to be booed or scolded for whatever he'd just done. As someone who has been a fan of EE since he arrived, it was tough to watch, and even worse to hear some fans identify this as a sign of his lack of heart. If anything, we thought he took too much to heart.

So there are few things that are as heart-warming to us as to see the broad smiles and gregarious demeanour that EE has had on display thus far this year. Early in the season, he leads or is tied for the lead on the team in hits, doubles, homers, RBI, stolen bases, slugging, OPS and total bases. For a guy who fans were chasing out of town until well into July last season, Edwin has the chance to be a big part of this year and the future of the team.

Introducing Evan: It was nice to see the Jays give Evan Crawford his shot at an inning of work on Sunday afternoon. For a player who was far back on prospect lists up until this spring, the 25 year-old Crawford has made a quick move up the board with some tremendous strikeout numbers over the past two seasons.

Crawford looked amped up for his ninth inning appearance, but threw strikes down in the zone and touched 93 MPH a couple of times on his way to a one-hit, scoreless inning. Also, on the scouts' 20-to-80 scale, his high socks were a 65. We wouldn't be surprised to see him back before the year is out.

-Another strong outing for Kyle Drabek, who has surrendered just two earned runs in his first two starts of the season. His 10/4 strikeout-to-walk ratio is also promising, and he may be pitching his way into a permanent position in the fourth slot of the rotation.

-Colby Rasmus continues to impress, and finally had a game where his hard-hit balls weren't directly at a fielder. If you can't see that he's playing well, we can't do much for you.

-Henderson Alvarez pitched well for the most part, but he seriously short-armed his pitch to Chris Davis on Saturday, which was turned around quickly for a tape-measure shot. We're not sure if he was overly concerned with the runner, or just wanted to quick-pitch Davis, but the result was a slow fastball well up in the zone. Let's hope it was a glitch.
Posted by Tao of Stieb at 9:10 AM

Only one ER for Drabek.

Thank god someone said it. IF EE, yunel or KJ had done the same thing, it would have been WW3. They would be picking up the peices of their lifeless corpses for days. But Lawrie does the stupidest thing I have ever seen in all of my years. Well short of any feilding by CoPa last year it was the Dumbest and actually most selfish play I have seen in a long time.
Farrell should have taught Lawrie a lesson and benched his ass.
I'm also very excited to see what Drabek is doing this year. I know its an EXTREMELY SSS. However after watching Mathis for 2 starts, I'm begining to wonder if catcher ERA is real. Is it just me or does JP for all of his defensive improvement, just call a horrible game? I mean Ricky called him off numerous times in his last start. He never seemed to be in synch with Morrow and considering Alvarez's youth and lack of experience, shouldn't we maybe have a more experienced catcher back stopping him?
Don't get me wrong, I'm not enthusiastic about putting the majors worst hitter last year in the line up more often than we need to, but we may need more than JPA can deliver. Plus he not exactly lighting it up with the stick right now. Never been a JPA fan as he seems incapable of ever having a high OBP.

i dont listen to or watch local broadcasts of jays games; waaaay to homer-y; and it was interesting to hear the tbr sportscasters point out that the jays put on a RF/IF shift against LH batters but the pitcher was pitching outside prompting opposite field hits that were beating the shift. so either JPA isn't getting it and calling bad locations; or farrell isn't getting it, or the pitcher is missing his spots. not sure which. but it was an observation that local guys here don't make.