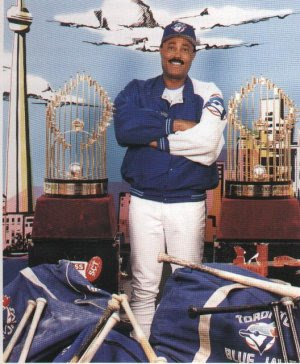 Okay, we'll give you a second to gather yourself after reading the title of this post.

You okay? Alright? Do you want a glass of water? Do you need some air? Here: Why don't you sit down for a moment.

Tweeter Kyle Darbyson (@starbyson, y'all!) suggested earlier that we make the case for The Manager to take home the hardware at the season's end as the league's best bench boss. And as we read it, we're not sure if he was being funny, or if he was completely earnestly looking for us to make the case.

And here's the weird thing: We think we might even be able to make that case.

Let's back up a second, and get something out there before we indulge in this excercise: We're actually not a big fan of this sort of award. Throughout all professional sports, the Coach/Manager of the Year award is generally given to someone who has a team that everyone presumes will kinda suck but that doesn't quite suck all that much. In some ways, it's barely even a reflection on the job that the person has done at all...It's mostly just an attempt to account for the difference between what was expected based on the team's perceived talent and what was delivered.

The answer to that particular bit of arithmetic is almost always assumed to be the non-player personnel who is closest to the game. In fact, you almost always hear this conversation start around two-thirds of the way through the season, with pundits saying: "I tell you what: You look at the job that Lindy Ruff/Eric Wedge/Sam Mitchell/Dave Tippett/Felipe Alou has done with this team, and I think you've gotta give him serious consideration for the Manager of the Year/Jack Adams Trophy."

(Seriously: At some point this February, Darren Dreger is going to look away from the dozen members of the NHL on TSN panel and stare gravely into the camera and say something almost precisely like the statement above, and act as though he doesn't make the same rote argument year after year. And then he'll light up a stogie with a five dollar bill and head out into the Agincourt night, doing donuts in the parking lot while checking his Blackberry. Prick.)

Sorry, we kinda lost track of ourselves there for a second.

If you wanted to take this from that typical point of view, then yeah, we think there is probably a good argument for The Manager to get...(clearing throat)..."serious consideration for the AL Manager of the Year." In the Junior Circuit, the Jays are probably the team with the greatest discrepancy between what was expected of them and what they've actually delivered. However, since the Jays are too far out of contention at this time, it seems unlikely that the Jays' skipper would get much more than a passing thought. Especially not when you have a ready-made triumph over coked-out adversity story that is probably already written for you if Ron Washington gets the nod.

Does the Manager deserve consideration? Well, here's what we can say about him...and believe us when we tell you that we've softened considerably on him the closer he gets to leaving the dugout for good: We think that The Manager has surrounded himself/been surrounded with an excellent staff, and that he deserves credit for empowering Brian Butterfield, Dwayne Murphy, Pappy Walton, Rick Langford and Omar Malave over the past year. We want to see the Jays bring each and every member of the field coaching staff back next year, and we hope that whoever they name as The Manager's successor will not feel the need to shake up the staff to suit his own needs.

Moreover, we're actually kinda impressed with the degree to which The Manager has shown some flexibility on the lineups, and that we haven't found his bullpen management to be over atrocious. (It took him a while to come around on David Purcey, but he got there in his own time.) Plus, seeing The Manager give as good as he got to Kevin Gregg, making the thin-skinned jar-headed closer's eyes well up and throat tighten in the post-game interviews was something of a highlight, and likely necessary to beat the delusion out of his pitcher's overgrown noggin.

So when you add up all of that faint praise, does the sum equal a Manager of the Year trophy? Probably not. Maybe. Really, who cares?

Email ThisBlogThis!Share to TwitterShare to FacebookShare to Pinterest
Labels: Friday Rock Out, The Manager

I can't believe you wrote this entire post without calling him CITO once. HIS NAME IS CITO!!!1 And, yes, he is The Manager of the year, and I hope you'll be there at his final game, to bid him farewell. I know I will be.

His name shan't be spoken around here until he has vacated the Manager's office and moved his stuff upstairs.

This may not mean much but I think it does. Walton is Cito's bench buddy. The pitching coach has the catbird seat and the man's ear. That's a far cry from the days when Cito was perceived as basically tolerating pitchers and the coach.

Add to that the out of nowhere performances of Bautista, Lewis and Gonzalez (then used to fleece the Braves) and you have a good case for Cito as the Manager of the year.

All that said I bet it goes to Ron Washington.

And about Ron Washington: cocaine.

seeing The Manager give as good as he got to Kevin Gregg, making the thin-skinned jar-headed closer's eyes well up and throat tighten in the post-game interviews was something of a highlight

CLarence has made me dislike guys i might otherwise have liked as a result of his line-up and BP shenanigans. this is now a reverse case as, unfortunately, i find myself liking Gregg more these days.

the Gregg reaction made him look like a douche but at the same time that incident speaks volumes about the lack of communication and mutual respect between the players and the manager. no one acts that way to someone they respect, not even Hoorah Gregg. We've seen more subtle but equally frustrated reactions from Litsch, Romero and Frasor this year. I won't even mention Accardo or McCoy. Snider has refused to take any bait regarding his treatment but you have to believe he has made comments privately to his teammates.

Cito reminds me of the Mendelbaum character from Seinfeld, always thinking about "macho headgames." It's pathetic really.

also, Maddon for MoY, if he manages to get the Rays into the playoffs.

You know, I came into this season ready to rip my hair out at the thought of having to sit through another year of Citocity, and didn't change much over the first month of the season -- "Why are you playing Bautista vs. righties?!", "Why isn't Randy Ruiz the starting first baseman?!", "What the fuck is the point of playing Alex Gonzalez at SS every day?!", etc.

Looking back, it's difficult to believe those questions were ever asked seriously, but I know I wasn't alone in thinking that way. Now that it's August and this incredibly-fun-to-watch team is still incredibly fun to watch, it's pretty clear: regardless of how aloof or out of touch he might seem at times, Cito knows what he's doing. And he's damn good at his job.

At this point, if The Manager wants to bat Snider 9th or tell all of his hitters to bat opposite-handed for reasons unknown, you know what? I'll be happy to sit back and see what happens. In the frustration that was 2009, it was easy to forget that this guy is the same Cito Gaston I grew up cheering for in the early 90's, but I'm glad I've come around. And I'm totally on board the idea of bringing in a new manager to grow with this team next season, but part of me will still be sad to see Cito go.

At this point, if The Manager wants to bat Snider 9th or tell all of his hitters to bat opposite-handed for reasons unknown, you know what? I'll be happy to sit back and see what happens.

it's not so much that his decisions often defy baseball logic, it's that he's such a colossal hypocrite

- he insists that guys need to be comfortable in their position in the batting order and then bounces Hill and Snider around at will
- he sticks with guys in certain positions long after they have shown they are not helping the team win in that spot (Overabay '10, Wells '09)

there are obviously more examples from this year and last year, but the overall picture i have of Cito is a guy who values being respected at all costs, and this infects his management of the team. i'm not saying a manager doesn't deserve respect, only that Cito seems to have a complex about it.

i'll be delighted when he leaves and i'm already nauseated by the handjobs he's getting.

Snider is a child who should do what he's told. He is in no position yet to question the lineup, let alone publicly. Plus he is often at the top now, which is better anyway.

And all those pitcher examples you gave feature pitchers who are frustrated with their own performance. Since you probably weren't standing on the mound during the pullings(unless you are John Buck or Jose Molina. If so, hi) you can't read the player reactions being frustrated at Cito or frustrated with himself. These guys aren't nuanced enough.

Cito has his annoying traits, but please. Don't make up annoyances.

i guess the 'getting the most out of the least' thing is a bit cliche, but there was a lot of talk this off-season about the jays out and out sucking.

Now that you bring it up, just how DID Ron Washington get away with doing coke and keeping his job?

The Jays are in fourth place. As Cedric Maxwell would say, Kyle needs to calm down.

I don't even necessarily agree that the Jays have over-performed this year. They strike me as what they've always been - An average to above-average team hurt by the fact that it plays in a division with three other above-average to great teams. Races like this year's - with some iffy team from the Central getting in - makes me wish baseball would go back to just two leagues and a balanced schedule, with the best four teams from each league making it.

I didn't expect them to be over .500 -- let alone 7 games over. I wouldn't bet the farm on them making the post-season, but this team has been a pleasant surprise for me.

I linked to LCD Soundsystem's Tribulations first, so there.

"And then he'll light up a stogie with a five dollar bill and head out into the Agincourt night, doing donuts in the parking lot while checking his Blackberry. Prick."

Haaaah, you had me at Agincourt

"Agincourt" is such a funny word. I'm gonna keep going back to that well as often as possible.