I think he'll fit in 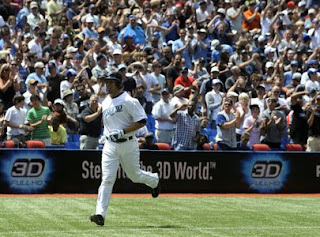 I mean, what do you want me to say about the debut of JP Arencibia?

Home run to left on an inside fastball - the first major league pitch tossed in his direction? Sitting back and smashing a double to right on a breaking ball down and away? A second home run to right field on a fastball away? Another measly single mixed in among his 4/5 major league debut?

Unbelievable, right? I kid you not when I tell you that watching the highlights, again, more than 12 hours after Arencibia's debut still leaves me with chills. It was an unforgettable performance for both The Player and the fans, and it's these moments exactly that allow the loyal to dream of better days in the near future.

And why shouldn't we? Arencibia could go 0/5 with 4K's in his next appearance, but why buzzkill just for the sake of it? For now, let's allow hyperbole to rule the day and dream that we've just witnessed a significant piece of tomorrow's puzzle find it's place on the board.

And its about more than just Arencibia - it's about Travis Snider continuing to prove he's ready to be a no-doubter everyday player, verging on stardom. It's about Aaron Hill and Adam Lind finding their forms as the season rolls through summer. It's about Yunel Escobar erasing memories of the never-ending search for a starting shortstop. And how about Eddie Encarnacion forcing his name into discussions and thoughts of "next year"?

With the starting 9, there are still holes to fill and names to pencil in - but not many. In his debut, JP Arencibia did his part to claim one of those spots in ink.

The Jays' young starters pitch like Men
Maybe I'm the only one, but loved this piece by Mike Rutsey on the personalities of the rotation. Then again, I'm a sucker for the cheese. I've made mention in these parts about how it really appears - the young starters in particular with Shaun Marcum as their leader - that this group of Blue Jays enjoys playing together, and maybe - just maaayybe - it shows in the results on the field.

OK, maybe not. But still, how good is this?

"Every time I come in after warming up before I start a game, Shaun (Marcum) comes over and says: 'Are you going to pitch like a man today?'

"Every time the answer is: 'Yes.' And we do the same thing to him. He's the oldest guy on the staff and we can say stuff like that to him."

Kyle Drabek is ready to pitch like a Man
He likely only has a few more starts before his innings-limit shuts him down for the year, so I'm going to continue banging the Kyle Drabek drum as a reminder to us all that the core of the rotation is not yet set in stone. Drabek's latest result?

That makes for 1 earned run in his last 3 starts (covering 18 IP), along with 12 baserunners allowed vs 15 Ks. That's significant, in that the right-handed starter sometimes described as "undersized" appears to be getting stronger as the season progresses.

A quick word on Jesse Litsch
He's an easy target, that Litsch. Not the most svelte athlete to appear in a Jays uni and not possessing the nastiest of stuff, he's an easy head to call for when better options appear to be on the horizon.

But I, for one, take no pleasure in hearing news of a player forced to undergo surgery and being disabled for 6 months. The career of a major leaguer is short, so effectively wiping out a 1/2 season of time is a massive blow to any player's shelf life.

I know that cutting remarks and cold dismissal of yesterday's flavor often contributes to blogosphere popularity, but I just don't have it in me to be brutal. Here's to hoping that Litsch manages his way back from his latest setback to resume a productive major league career.
Posted by The Ack at 1:27 AM

great article sir, all valid points. What are your opinions on E5 for next season considering his improvement on offence AND defence? I still think there's a non-tender in order, but a 1 yr + club vested options could be something AA throws his way.

Hmm...is there ANY scenario where Drabek pitches for the Jays this year? One in a million. No point in starting his clock. But if the Jays go on a crazy tear and are within striking distance of the wild card. An unlikely, impossible dream, but a nice wet one.

And if Buck goes on waivers, is there a fit with any team? It's highly unlikely they'll release Molina.

I was with you on everything except Encarnation. But great post and your comments on Litsch were spot on.

Enjoy the thrilling debut by your new catcher. That certainly was impressive!

how long before Aaron Hill slides hard into 2nd to break up one of Yunel's solo double plays?

Yes, what is to be made of those Yunel solo double plays? How do you say teamwork in Spanish?

I totally get the feeling that Aaron Hill feel emasculated by Yunel. The look on his face when Escobar sidesteps him is pretty classic.

I enjoyed that piece by Mike Rutsey as well. Thanks for the link, Ack.

I don't think AA is going to bring in just anybody to man 3B next season, esp if EE carries on like he has since the Vegas recall.

He'll likely always be streaky, but my guess is that AA looks for a long-term solution via trade as opposed to bringing in a replacement-level vet over the offseason.

So, how about that lineup this afternoon? Giveaway Sundays at the 'Dome!

this is 2 series in a row where the Jays have had a chance to sweep and Cito has put out a lesser line-up. you have to imagine the pitching staff just hates the guy. the farewell ceremonies for the manager are going to be gag inducing in september.

had to laugh at Blair on PTS claiming that the lack of injuries to the starting rotation was evidence of Cito's success this year. that's a pretty big stretch, given that the main staff change from last year is the new pitching coach.

All great points, though EE will take some heavy convincing. Also worth noting Litsch's 8.2 inning debut in the bigs - there was a lot of love there too for a brief period of time, and hopefully he's back one day.

JPA won't be the catcher for long will he? 1B of the future?

I think the Jays will give EE another shot, just because according to Cot's, the potential free agent third basemen aren't that impressive:

Atins, Chavez, Lowell and Mora are old and cooked. Cantu is interesting, but not a great fielder, IIRC. Hall is a bench player, and Feliz should be one. Inge will be coming off an injury, Izturis doesn't have much of a bat for third, Punto can't hit, and Wigginton is having a fluke year.

And I loved that you linked to the Encarnacion video. That shit is quality.

^^ Yes! Somebody clicked the link! Unless there's copyright laws preventing it, there's no reason that shouldn't be jumbo-tronned during the starting line-ups, at least. Maybe after an EE blast. Can you imagine?

Ack, I tweeted the shit out of that video after I saw it at DJF. One of my boys who's on Twitter works at the Rog. He got in touch with the marketing department, and said that's EXACTLY what they should do with that video. The marketing department was all over it. They had someone send it downstairs to EE, so he could watch it. What happened after that is a mystery, to me and my good friend. But somewhere along the line it got squashed. I hope it wasn't EE, but at least we tried.