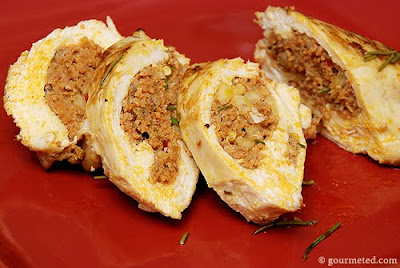 (The image above was swiped from gourmeted.com. In case you hadn't heard, meats don't clash. Miam miam.)

We've probably spent too much time sharing with you our Pollyanna-ish enthusiasm for the present and future of the Blue Jays. So to give you a rest and to cleanse your pallet from our sugary-sweet concoctions (and to give us a break from thinking), here are some other savoury bits of knowledge.

Birds of a feather: It scares us to think that we might have just about the same thought process as the Drunks' Dustin Parkes (we kid!), but his internal dialogue from the past couple of days pretty much sums up what we were thinking. Blerg.

Downs views: Drew picks up one of the loopier lines of thought brought up in his liveblog on Tuesday, which asked whether if the Jays might retain the services of Scott Downs in the future. Also, he put this Sam Cooke song in our head.

Overbay, over and out? MLBTR passes on the news that Lyle Overbay has passed through waivers. We've got a post brewing on his time in Toronto, how we've grown attached to him, and how he was like an endtable that occasionally brought the room together. (Note: Metaphors may change without notice.) It wouldn't surprise us at all to see him move before the end of the month.

Big TV numbers: The Star's Zelk notes that the Jays pulled in more than 760,000 viewers - roughly twice the normal audience - for Sunday's near no-hitter. The Jays have put up pretty good numbers all year, which may or may not be due to the new PPM ratings systems. It will be interesting to track those numbers in the next few years, as the Jays' worth to Rogers rests primarily in their value as a television property.

Sportsnet One, Sportsnet None? Speaking of Rogers and ratings, don't be surprised to see bulk of Jays games move to the new national service Sportsnet One. (They've already announced that 25 games for this season will head to the new service.) The unspoken second half of this equation is the question of how long the other cable companies will drag their feet on carrying the new service. So if you're on Shaw, ExpressVu, StarChoice, Videotron or whatever, don't say we didn't warn you that you might get frozen out of some coverage in the short term.

And one more Rogers gripe: Any chance that the kids at Rogers are going to get going and launch Baseball TV anytime soon? Or ever? Considering the availability of the Big 10 Network, CBS College Sports TV, Golf, Speed, Poker, Harness Racing, Fishing, and the league-run entities of the NBA, NFL and NHL, it would be nice to think that we just might have access to a 24 hour baseball channel in time for the long winter offseason.
Posted by Tao of Stieb at 9:54 AM

I like the idea of the Jays on a National channel, rather than the regionals.

I know people gripe about the lack of attendance this year, but I can bet you the Jays TV ratings are through the roof this year.

Either way, folks are still catching the Jays games - just not as many butts in the seats as they would've hoped. Those butts are parked on the couch eating some pork rinds or beef jerky (Meats Don't Clash!).

It will be interesting to track those numbers in the next few years, as the Jays' worth to Rogers rests as much in their value as a television property.

unfortunately this sentence needs yet another "as" in order to be syntactical.

Yeah, weirdly worded sentence. What can I say. They're not all golden.

kick save and a beauty, smooth recovery, stick the landing, etc.

EE has a career .787 OPS in the major leagues. Over that same span (2005 to present), Adrian Beltre has an OPS of .784. Over Beltre's entire career (including his outrageous 48 HR season in 2004), he has posted an overall OPS of .789, still only two points higher than EE's career number.

If you believe This Article which excluded Blue Jay television viewership in it's rankings, the Jays may actually have the highest television ratings in all of baseball.

Yeah, it's great to have Blue Jays games on a national channel... unless your local cable provider in rural Ontario doesn't have access to motherfucking Rogers and their cock-sucking specialty channels.