Saluting Greatness and Giving Thanks 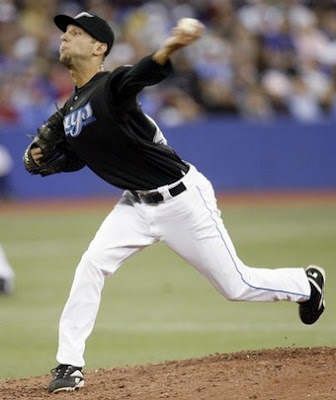 Seeing as how we've been a bit of a negative nellie lately, we figured we should take a moment and look on the bright side of life.

Remembering Carlson's Houdini Act
In the whole run of a season, it is sometimes easy to forget some of the truly great performances that we had the opportunity to witness. Fangraphs reminds us of Jesse Calrson's heroic effort versus the Texas Rangers way back on April 16, which they rank as the third best pitching peformance of the year. While the Jays went on to lose the game, Carlson certainly held up his end of the bargain by entering with the bases loaded and striking out the side.

Fangraphs notes that "Carlson recorded a 0.721 WPA for his stellar work"...and while we don't really know what that means, it sounds awesome and reminds us of a truly transcendant moment in the 2008 season.

(An appreciative glove tap to Neate at Out of Left Field for this.)

The Greatest Roy Halladay Post Ever Told
We bow and genuflect before Lloyd the Barber at Ghostrunner on First for this outstanding post detailing the daily routine of one Harry LeRoy Halladay. Amongst Doc's activities:

"7:00 AM: Begin daily staredown in the mirror. Turn grimace to stun.

9:00 AM: Realize that the only man strong enough to survive the glare of Roy Halladay is Roy Halladay."

There are some really great Jays blogs out there, and there have been many salient and humourous takes on the team over the past few years. But when we read this post, we were immediately struck with an overwhelming jealousy at its excellence. We wish that we were clever enough write something this good.

Thanks Be Given
Our sincere appreciation to the 'Duk at Big League Stew for listing us amongst his 101 reasons to give thanks this year. Seeing our name dropped alongside Vin Scully, Dan Schulman, Joe Posnanski, and a veritable cornucopia of the greatest things in a baseball fan's life is a truly humbling experience. We can only hope to live up to such a tribute.

I, too, am thankful for The Tao of Stieb. Cheers, fellas.

Why is it humbling to be put up with those names? I never understood why people are "humbled" to win awards and be "named along with those great people" or whatever. Don't be humbled, man! Be proud and cocky!

Humility is a virtue that will take one a lot further then rubbing your successes/recognition's in other people's faces. I think you are joking, but it needed to be said (to Brendan).

I said it in response to the GROF post about Halladay (Which is a truly enjoyable piece - try to tell me you weren't giggling and smiling ear to ear picturing Doc slinging tired dogs over his shoulders).. Halladay has never received 1 MVP vote. Not a 10th place vote not even once. That is bullshit.