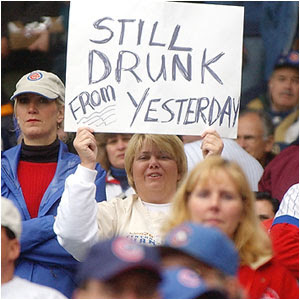 OK, so I'm a day late.....but I meant to post this yesterday, and was too lazy to change the title.

It's November 1st, the World Series is over, and the GM meetings are just around the corner. You know what that means, don't you? Hotstove season, babies. Every year, once the Jays are mathematically eliminated, the Hotstove pretty much becomes the next "big thing" I look forward to. And here we are.

On to the aforementioned quick-hitters:

Ooooh.....the drama! The intrigue! Will he or won't he? What do you think he'll do, Blue Jay fans? Any guesses? (end sarcasm)

The Jays first major offseason move has come to pass, as the club has exercised the 2009 option on Rod Barajas. Oh, right - sorry - sarcasm mode ended. In all seriousness, it`s a pretty good situation for the Blue Jays, as the presence of Barajas behind the dish, on a one-year deal, will help the club bridge the gap until top catching prospect JP Arencibia is ready to handle the starting job. At least, I would hope that`s the plan....


Just what in the fuck is it in the water these days that has Blue Jays fans jumping from the CN Tower over the club's fate next season? So, the Rays make the World Series, and automatically the Jays are reduced to a guaranteed fate of a 4th place finish in '09? Nope, I'm not buying it. I'm just not. You want predictions? Well, I've got some predictions for you: Scott Kazmir will be good for maybe 15 starts next season, Evan Longoria will go through a sophomore slump, BJ Upton still won't "get it", and David Price will show why very few players make the jump to the big leagues one year after being drafted. Yes, the Red Sox will find a way to finish with 90+ wins, but the Yankees, despite spending an obscene amount of money this offseason, will disappoint.

Oh, and the Blue Jays? Yeah, OK - the rotation, as currently constructed, scares the piss out of me. There's Doc, who's an animal, obviously....and Jesse Litsch, who makes a fine #4 or #5.....and a whole lotta ?? (question marks). But the offense? Why can't the offense improve? Full seasons from Young Adam Lind and Sniderman (if he breaks camp, that is) won't help? A healthy Vernon Wells won't make the team better? And how about the guy everyone seems to have forgotten about - Aaron Hill. His presence won't improve the lineup? Don't get me wrong - Joe Inglett did a great job filling in, but he 's not going to get you 15 HR and 40 doubles like Aaron Hill can. And what about the massive boners everyone was sprouting about the work Team Cito did with the hitters? We're forgetting about that now?

And finally, let's not forget that JP Ricciardi (the other JP) knows the club needs a push, there's a little payroll room to kick around (maybe more than we think? Hmm?)....and, oh yeah, the little matter about a new incoming President and his job being on the line....

Here's to hoping Ted Rogers bounces back from his latest medical scare. Details are sketchy at the moment, which is usually ominous, but let's hope for the best.

Why is everyone kicking my ass over the idea of inquiring about Billy Butler? Once a top hitting prospect, he seems to have fallen out of favor with Royals management, and word on the street (OK, from Keith Law) is that he could probably be had for relatively cheap. A 22 year old, still getting his feet wet player who was once hailed as a having .300-25 HR potential isn't attractive? In short, fuck you guys!

Owning up, I can see how my longings for an incentive-laden contract to lure Pedro back to the AL East seems, well, insane. But something tells me he'd love to shove it up the Red Sox (and his daddies, the Yankees) ass one more time, and maybe, just maybe, he can coax another year out of that shoulder. I'd never sign the guy to a massive base contract.....but a one year incentive-based deal? Why not? Who'd he be blocking? A probably not ready Brett Cecil? My guy Rick Romero? If nothing else, it'd be an exciting gamble...
Posted by The Ack at 9:37 PM

I'm not down on 2009, not even the pitching. By June we are looking at Doc/McG/Litsch/Purcey/?? (with ?? very likely being Janssen)

I think Litsch is perfectly capable of being as good as most teams #3 - plenty of teams had made the playoffs with worse pitchers as their second best starter.

And I don't just mean offensive juggernauts either.

On Butler, depending on the price, it's a nobrainer.

I'm all for the Pedro idea too, after I sniff out the possibility of luring Randy Johnson.

The worst case on Pedro is that he stinks and by the time Dusty comes back he's the #5 until he gets hurt...and when he gets hurt, Cecil and Romero will have had the needed extra months in AAA.

Not sure Pedro's shoulder will hold up and even if it does, his 109IP and 5.61ERA in 2008 doesn't look promising. Also, add in the fact that he has to pitch against a DH and face lineups from Boston, New York, and Tampa Bay (which looks promising) and this incentive filled contract might not be worth it.

Imagine if we had this rotation with BJ closing things out.

Jesse plus his new 4 seamer I wouldn't mind him being a number 3.

its nice to go to a blog and see some optimism. the jays can finish fourth next year, but they can also win the division. they have alot of work to do, but fuck, why write off a season 5 months before it starts

I still don't know we haven't traded for peavy!!!

Because Peavy has a full no-trade and didn't list the Jays as an option. End of story.

That was a joke.

In other news Dempster says he wants to test the market. Unless he takes a discount to come home no thanks. His year this year was to good and out of the norm for a big contract. And it was in the NL.

What about Brett Tomko or Randy Wolf? Those guys would only be around 3-4 million each ...

Because they're Brett Tomko and Randy Wolf?

If the Jays find a way to secure Burnett and maybe another hitter, Peavy might change his mind. Only problem is we don't have enough to trade for him unless we completely blow up our current team and future.

The Peavy thing was a joke. Might as well wish for Pujos while you are at it

Supposedly, the Mets are looking to trade for a closer. Could be a good spot for BJ. Not sure what we could get in return. Who becomes our closer at that point? Downs or League?

League. Downs is too good to limit to 9th inning duty only.

We took a shot at jobbers like Tomo Ohka, John Thomspon and Victor Zambrano. Of course, they're not, never have been, and never will be anything compared to Pedro, but why the hell not take a chance on him?

At this point, even Pavano seems like a risk worth taking.

As for the backup catcher situation, anyone but Thigpen. I don't know why, but I hate Thigpen. OK I know why. Because he's shit.