Playing Catch Up with a Mess o' Items 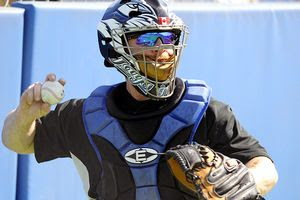 Zaunie's got a red ass
Gregg Zaun dialed up his favorite sounding board, CanWest's John Lott, and let loose on the Jays organization and J.P. Ricciardi for a series of slights (both real and imagined). While we're not inclined to pine for the return of a 38 year-old catcher with diminishing skills and a possibly overinflated sense of his worth, we'll confess that J.P.'s statement near the trade deadline that nobody wanted Zaun was a bit offside.

(Even if it was true, Ricciardi should probably have shrugged it off and eaten shit when the press was grilling him on Zaun trades.)

We'll miss Zaun this year, and we hope he lands the backup spot on a contender as he states is his wish. We also hope that he makes his way back north of the border for the occasional broadcasting gig, because his fake slow-mo clinics in the commercial breaks in the playoffs were as insightful as a whole year with certain analysts.

If Marty York says it, you know it must be true
In his latest commuter rag scribblings, Marty York buys in fully to the "Bob McCown's Stan Kasten for Jays President" story, noting that Gord Kirke met with him in New Orleans. And this is absolutely newsworthy, as Gordon Kirke is not at all known for hanging out with sports figures and front office types. So something must be up, right?

Cito to be honoured
We'd never heard of the Jackie Robinson Lifetime Achievement Award before today, but if it exists (and apparently it does), then we can think of no one better to receive it than Cito.

This offseason is having an affect on us
It's making us very sleepy. Someone jostle us awake when something happens.
Posted by Tao of Stieb at 10:14 AM

I always admired Zaun for pulling his life back together and for talking a lot, showing personality...he probably feels loyalty to the club because JP/Jays gave him a shot, so getting the cold shoulder prob smarts...esp since the break up was of the avoidance/show up with another girl at the club variety not the "it's not you, it's me" or the "I like you, but not in that way" variety.

mcCown just launched his own web site...he was talking about it on Prime Time last night. Kinda cool where you vote for a new logo.
www.fadoo.ca