Vernon Wells is going to make Blue Jay history in 2010 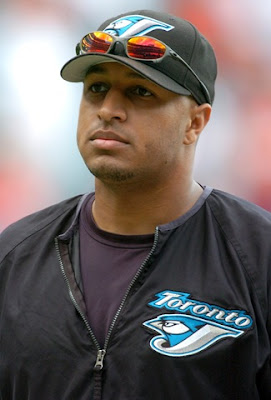 As we were scrolling yesterday through the PDF pages of SABR's awesomely free Emerald Guide to Baseball, we found lots of informational nuggets that could have been turned into some sort of trivia challenge, if we were so inclined. (Of course, the most amazing prize that we could offer is probably the opportunity to share a six-pack of Carling with you on your front step, so it hardly seems worth the time to set up any such game.)

Amongst the more interesting things that we noticed in combing through the Blue Jays' career leaders in a number of statistical categories was the number of places where Vernon Wells is poised to leapfrog over some of the greatest names in the Jays' pantheon in the coming year. The categories in which he's ready to bound ahead are all counting stats, so they are as much a tribute to Wells' staying power as much as his performance.

Here's some of the milestones that we can expect Vernon to pass in the coming season:

At Bats: Wells currently sits fourth with 4880 ABs, behind Fernandez (5335), Moseby (5124) and Delgado (5008). Even with some time missed, Wells could easily reach the 456 at bats necessary to move ahead of Fernandez. (Supposing that Tony doesn't have one more comeback in him.)

(A quick break to mention this: We're really starting to miss Lloyd Moseby right about now. A pretty great player with the greatest nickname in Jays history. And now, on with the countdown.)

(Another brief pause just to say: We are now kinda wishing the Jays had grabbed Delgado off the free agent scrap heap this season, if only so that he could put a little extra daylight between himself and Wells in some of these categories. Because it just seems to us as though Carlos deserves to be at the top. Let's soldier on, shall we?)

Stolen Bases: Surprising (to us, anyways) is the fact that Wells (84) currently sits outside to top ten in steals. A couple of swipes this year will move him ahead of Handsome Alex Gonzalez (85) and José Cruz Jr. (85) for 10th spot, far behind all-time leader Moseby's 255.

Walks: A full, healthy and patient season from Vernon could push him (356) past Willie Upshaw (390) for seventh on the all-time list. Barring a contract extension for Wells through 2020 (*shudder*), Delgado's mark of 827 walks seems safe.

Vernon's place in history
We're not sure if this is sad or not, but given his contract, we assume that Wells will fumble his way to the top of most of these categories by the time he's done stealing money from this franchise. (Actually, we're pretty sure that we're sad about that.)

If Vernon can bounce back to a form which somewhat resembles his All-Star days of yore, we can see these milestone moments being celebratory over the next two years. But if he limps over the line and stumbles his way into history, we could see his achievements being greeted with a funereal resignation.
Posted by Tao of Stieb at 9:55 AM

Thats quite a few milestones...unfortunately Wells limping his way up the all-time ladder is probably not going to cause stampedes at the ticket counter.
On a somewhat related note...can we see Cito putting Wells into the lead off spot this year? I think despite Well's complete lack of plate discipline his average+ speed could confuse Cito into letting this happen.
On a completely unrelated note. At what point do we lose the picks if Barajas doesn't sign? I have been searching to see if there is a cutoff date but I haven't found one. Second if no one else wants him does anyone see the Jays signing him to a very friendly number and hoping that someone during the season will need a C?

The Mets are not interested in Barajas. Fuck. He doesn't sign and no B Draft pick? shit......The Jays will get screwed NO other team wants him!

a six-pack of Carling on my front step with you could be a very engaging experience - be careful what you promise!

Wells in the leadoff spot actually isn't a totally bad idea. I seem to recall that he would shorten up his swing a bit. Maybe we can turn Vernon into a slap hitter in the two-hole!

(And just then, I remembered that The Manager holds all of my hopes for a rational approach to lineup construction in his old, rigid hands. And I wept. And turned to the heavens in anger, forsaking all notions of enlightened gods. The Manager made me an atheist.)

Looking at his numbers, it seems like Wells has put up his best performances in the SIX(!) hole, which is pretty much where we would slot him if there was a better lineup all around him.

Just the thought of an extension through 2020 just made me throw up in my mouth a little...

Man you just depressed the hell out of me.

I believe in Vernon Wells!

He will return to form this year and be celebrated.

Is Delgado still out there? Or better yet, Winston Wolfe? He would take care of this Vernon Wells "problem" in minutes for the Jays.

It's all about the big pricetag with Wells, isn't it. Nobody's got anything good to say about him anymore because he's overpaid.

I read elsewhere that Wells is 5th among AL outfielders in RBIs over the last 5 years, and that includes 2 weak (injury influenced) years most recently.

Not his fault the market corrected itself about a year after he signed the monster contract, which was actually praised at the time in most circles (as discussed on the Southpaw blog last year).

If he returns to even close to form, he'll be very useful on this team. And he seems to play better when he's not The Guy, which will be the case shortly. You can't move the contract so enjoy the player and put him in the best position to succeed (right field).

Say what you want about VDub, and some of the criticism is justified, you can't accuse him of not caring.

You know what else is depressing? How much I would love to split a six pack with you on my stoop. Actually, we could even go swing on my kick-ass lawn swing. You wanna wrestle in our underwear? I'll let ya pin me!

I am not convinced he won't bounce back a bit. I definitely think the fans do not help matters - Toronto fans boo far too much, and show themselves to be ignorant bandwagon jumpers. It is, quite frankly, embarrassing.
I think it has something to do with some bizarre sense of entitlement - they think they DESERVE a winner, based on the size and quality of the city, or some such nonsense.
Anyhow, go Jays! I hope Vernon and the rest of the gang have good seasons, and this year's team is more competitive than people predict.

His comparable players on Baseball Reference are full of underwhelming guys like Aubrey Huff, Bobby Higginson, Rondell White, Carl Everett, Brian Jordan and Geoff Jenkins. Most of them had decent years here and there, but none of them were perennially great players.

One more of those years and I'm with you, but I just can't quite believe he's as bad as he's played recently. He could be a mediocre player who excelled for a year or two and built a contract, or he could even be something else, given all the PHDs that were flying around in Toronto. But he seemed to me always to be at least Bernie- Williams good, and probably better.

If I'm wrong, Rogers is going to have to eat some serious money.

Rogers should take advantage of a cheap team on the field to renegotiate Vernon's contract. Some front loading and deferring of money could make his 2011-2014 years tradeable.

From V-dub's perspective, the dollars don't change, just the timing of them.

Gil, that would be a good idea but the opt-out clause makes it kind of impossible. Unless part of restructuring the contract means getting rid of said clause, which I'm not sure Vernon would agree to.

When does the opt-out clause kick in? It might be possible to pay Vernon a chunk of money to take that option, then renegotiate the deal at a more sensible number. But that would be asking an awful lot of Wells. You know, we negotiated a deal in good faith thinking you were THIS good, but because, as it turns out, you're only this good, we want to pay you less. Or drop your salary so we can trade you.

Gil and others, unless I'm mistaken, I think the MLB Player's Union prohibits players making deals like that once they sign a contract. I know a big sticking point with the failed A-Rod trade to Boston was that he couldn't waive some sort of roster bonus or Xth guaranteed year that would lower the overall value of the contract.

I'm not sure if this extends to NBA-style releases; i.e. We will cut your contract and you can go to another team if you let us pay you $0.20 on the dollar to do so. I don't hear about it happening in MLB, so I'm assuming these sort of deals are also rare or outright prohibited.

Last thing on Vernon -- he was also one of the guys who took less money on the front end of his deal, presumably to let the club add players. His salary appears inflated, therefore, not just compared to his recent onfield stats (although he had a decent 2008 given the lost time to injury), but compared to what he was being paid in the first three years of his deal. If he can return to being a 25-30 HR guy, .300 average, 100 RBIs and decent defense (an slightly above average centrefielder with good range and routes to the deep ball) then he's earning his big money and we should shut up about it. Murphy has to teach him to lay off the crooked stuff, because the stats say he still mashes fastballs.

I don't think it's impossible.

I BELIEVE IN VERNON WELLS.

Make good the scam with two backs casinos? peruse this late-model [url=http://www.realcazinoz.com]online casino[/url] guide and out first up online casino games like slots, blackjack, roulette, baccarat and more at www.realcazinoz.com .
you can also substantiate our up to year [url=http://freecasinogames2010.webs.com]casino[/url] forgo at http://freecasinogames2010.webs.com and furbelow in essential folding spondulix !
another green [url=http://www.ttittancasino.com]casino spiele[/url] gyve of events is www.ttittancasino.com , because german gamblers, stretch manumitted online casino bonus.